SAN ANGELO, TX — San Angelo City Manager Daniel Valenzuela confirmed Thursday afternoon that the City is looking at several commercial businesses that may have caused widespread contamination of the City of San Angelo Water Utilities distribution system. He did not name names, however; at least not yet.

Before last week’s winter storm that knocked out about half of the City of San Angelo water distribution system, there was an earlier crisis of contamination of city water discovered and soon thereafter isolated to the northeast side of the city.

Thursday afternoon, Feb. 25, City Manager Daniel Valenzuela released a video reminding San Angelo residents that the Feb. 8 water contamination crisis has not been resolved. Residents and commercial entities with running water in the far northeast side of the city remain under a “do not drink” water notice. Valenzuela noted that through mitigation, the “do not drink” notice is a downgrade from the “do not use” notice that has been in effect since the contamination was discovered. Progress has been accomplished, he intimated. What is more, the City has narrowed down the method in which the water system was contaminated.

“This was not a chemical spill,” Valenzuela said.

Valenzuela said the investigation so far has revealed the contaminants of the chemicals naphthalene, benzene, and acetone entered the pressurized water mains through a backflow valve. This is client premises equipment installed at the point where the client premises connects to city water.

Usually used for commercial customer water hookups, a backflow valve prevents water or other contaminants at the commercial premises from backing out through the premises’ water feed pipe into a main pipe on the water distribution system. In other words, a faulty backflow valve may have allowed on-premises water, contaminants, or likely both, to backwash from the commercial entity location back into the city water distribution pipes.

The contamination was discovered when 50-60 complaints were expressed by water customers to the water department in early February that the water had a foul mothball odor. All of the complaints originated from the PaulAnn residential neighborhood on the city’s northeast side. Testing ensued and the Texas Commission on Environmental Quality, or TCEQ, was dispatched and continues to monitor the city water closely.

The two images below are of the same map from the City of San Angelo and display where the "do not drink" order is in place, in the white area of the map: 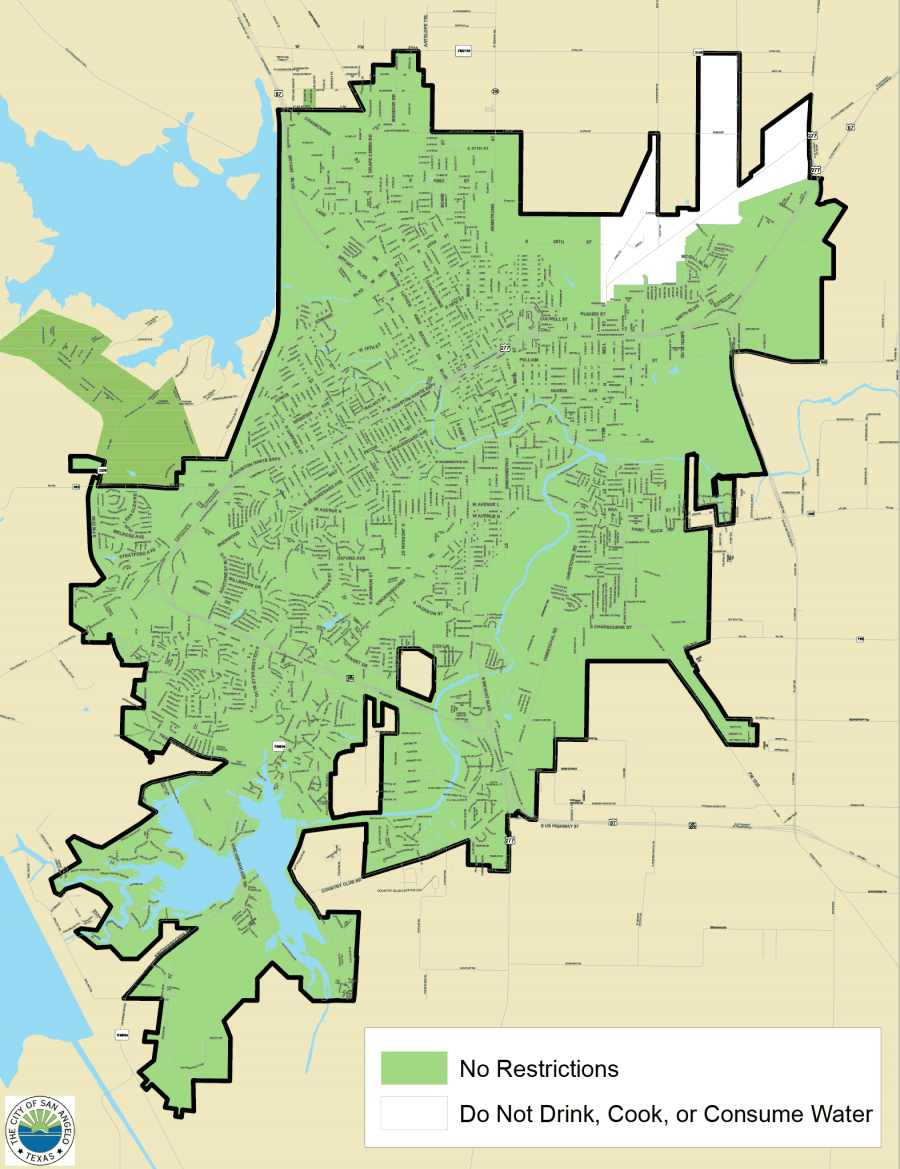 Download a hi-res *pdf of the water safety map here.

“I am not going to sweep this under the rug,” Valenzuela promised.

Valenzuela said pinpointing the exact source of where the contamination originated is not a quick or simple investigation and confirmed that multiple businesses are under the microscope.

“I will let the public know as soon as possible,” he said. “I want answers, too. The investigation has not stopped and will be ongoing.”

Valenzuela said the northeastern edge of the water system where the contamination remains was valved off from the rest of city water on Feb. 8 as water quality testing continued.

“We want to learn all we can about what occurred,” he said.

Earlier this month, the City transparently released lab results of water testing accomplished Feb. 8 - 11. Very high levels of benzene were discovered in the City water in the PaulAnn area. In one test, benzene contamination exceeded 177 parts per billion, or 0.177 parts per million. The CDC noted that the estimated lethal oral dose of benzene is 100 mL — a much larger amount than what was in the water — but also that the chemical is considered a carcinogen. OSHA rules set the permissible exposure limit (PEL) of benzene at 1 to 10 ppm depending upon the length of time of exposure.

The same tests revealed 141 ppb or 0.141 ppm of naphthalene, also known as the chemical in mothballs, in PaulAnn area water. The CDC noted lethal doses of naphthalene in lab animals during experiments are in the neighborhood of 64 ppm or higher.  OSHA rules set the permissible exposure limit (PEL) of naphthalene at 10 ppm.

City spokesman Brian Groves said the two investigators the State of Texas supplied to help the City pinpoint the source of the contamination have not returned since the winter storm causing widespread power outages last week. Originally, the two investigators were from McAllen. Groves said the same two, or a replacement team, will arrive in town soon.

Elected officials have come under fire in the wake of all of this. Meanwhile, the mayoral election is scheduled for May 1. Three city council seats are up for grabs that same election and all of these city contests has an incumbent.

On the seven-person council, three new faces can change the makeup of City government. However, not one challenger for any of the contested positions has spoken in public about the ongoing crises.

When asked if Valenzuela’s presentation on video made by him, the city manager, and not an elected official, happened to take the spotlight off Mayor Brenda Gunter who is usually out in front discussing the crisis of the day, Groves said no. He said that the quick turnaround of the video was important to quell many of the rumors and conspiracy theories about the water contamination and Valenzuela was available this afternoon to quickly produce the video piece.

The City has opened up all of the water system except the PaulAnn area for drinking. Groves said the purpose of Thursday afternoon’s presentation was to allow an official with authority inform the citizens about the current state of the water contamination mitigation and investigation efforts.

What are they going to do if they find the business? A fine? A slap on the wrist? If they just receive a fine then businesses will just see that as the cost of doing business and have no real incentive to fix the issue (one of the many problems with capitalism.) Take their business license away to send a message, because the next time this happens it could kill someone. Also, if the city decides on just a fine (which they probably will do, again capitalism) then some of that should go to the residents of paul ann that were affected in the form of a property tax rebate or something. Of course churches should be excluded from this because they didn't pray hard enough to prevent it.

Idiot child, I bet your parents are proud of you!

They sure are! I get a gold star everyday!