CHRISTOVAL, TX — “I’ve been fielding a lot of complaints,” County Judge Steve Floyd said. The complaints have been flooding into the Tom Green County judge’s office for days, he said, concerning the large Texas music concerts being held in the backyard of Cooper’s Bar-B-Q on U.S. 277 in the middle of the town of Christoval during the timeframe of the statewide COVID-19 bar and venue closures.

The Cooper’s backyard features a stage, multiple picnic tables, corn hole playing areas, and port-a-potties to entertain around 2,500 people on two acres. For years, Mark Cooper, proprietor, has attempted to turn the stage and outdoor music venue into a profitable revenue center for his barbecue joint located at the front.

Cooper’s family is well-known for their signature barbecue and sauce. For many years prior, Mark, who founded Cooper’s in Christoval three years ago, ran the barbecue restaurant in Junction at U.S. 83 and I-10. His attraction to Christoval, he said when he opened, was the traffic count on U.S. 277. He thought the location was a sound business strategy.

The COVID-19 shutdowns of bars and restaurants within the city limits of San Angelo as well as across the state gave the Coopers the opening they needed to establish the backyard music venue. It started with Two Tons of Steel back on May 16. During the weekends that followed, Randy Rogers, Aaron Watson, and then Kolby Cooper this past weekend packed the outdoor venue. These are staple acts on the Texas Country Music circuit that brought top dollar before Governor Greg Abbott closed virtually every bar and music venue in Texas.

With not many places to go, the biggest Texas Country Music acts in the nation have discovered Cooper’s. Nestled outside any municipal authority in the wild west Texas county, Stoney LaRue, Josh Abbott, Robert Earl Keen, and Kyle Park have booked the barbecue joint’s backyard for a majority take of the ticket sales that range from $30-45 each. Cooper’s makes money on the cooler fees and food sales.

Then yesterday, Tom Green County Pct 4 Constable Randy Harris delivered Mark Cooper the bad news. Harris said nothing like the public notice from County Judge Steve Floyd has ever been served. “They weren’t sure how to do it, so they called the constable, I suppose,” Harris said.

Mark Cooper was ordered to “Close all concerts or special events open to the public in the outdoor areas of Coopers BBQ that require live performances or amplified music.”

The order continues, requesting that Cooper “Seek permission from the County Judge for any use of the outdoor areas of Cooper’s BBQ in which 10 or more people will gather except for uses [such] as general dining.”

Mark Cooper promised that his planned shows will go on, however. He has no plans for canceling the events. Those shows are Stoney LaRue on Saturday, Kyle Park Aug. 22, Robert Earl Keen on Aug. 29, and Josh Abbott on Sept. 4.

"A constable did give us an order from the doctor but as of now all of our events are still contracted,”  said Mark Cooper. "In the mean time I am putting together a plan and coming up with ideas on how we [Cooper's] can keep the concerts running.”

Cooper claims that he and Dr. Vretis have already discussed ways that they can continue operating. The main complaints were large groups of people and not wearing face masks. Cooper says that at their events they already keep an abundant amount of PPE and try to police people as much as possible. However, ”At the end of the day people are going to do what they want," said Cooper.

County Judge Steve Floyd said no one at Cooper’s has ever asked for a permit to hold events where 10 or more people are gathered. Others have, he said. He gave examples of clay bird shoots, church gatherings and picnics, gatherings at the county 4H building, and even school district superintendents who were re-organizing their traditional high school graduations. Floyd said he relies on the advice of Dr. James Vretis, the appointed Local Health Authority for Tom Green County.

“I’m not a trained physician so he is pivotable in my decision-making process,” Floyd said.

Floyd said the governor’s Executive Order No. GA-28 provides the protocol to request special permission from the county judge if planning a gathering of 10 or more people. Mark Cooper sent in his request just after 10 a.m. this morning.

Floyd said enforcement of the Cooper’s venue events is out of his hands. The Local Health Authority and state agencies enforce it. “The county sheriff is an elected official. I can’t even order him to enforce this,” Floyd said.

Floyd said enforcement could come from state agencies like a district prosecutor or the Texas Attorney General. The Texas Department of Emergency Management could call upon the Texas Department of Public Safety to enforce the ruling, Floyd said. A violation of Section 81.005 of the State Health Code could be prosecuted as a Third Degree Felony if Governor Abbott hasn’t removed that penalty in his various health declarations. Whether or not it gets that far is in question, however. Abbott demanded a district judge drop charges against a Dallas hair stylist who dared to stay open when hair salons were ordered closed in March.

Floyd said Vretis has been working with Mark Cooper to come up with a social distancing plan. “Vretis is confident they can come up with a plan that will work,” Floyd said.

Cooper submitted his plan this morning. Stressing that the barbecue joint’s backyard is two acres large, he outlined his present guidelines.

In addition, Cooper added the following guidelines as requested by Vretis:

Vretis was photographed at last weekend’s concert at Cooper’s not wearing a mask, receiving much scorn on social media. 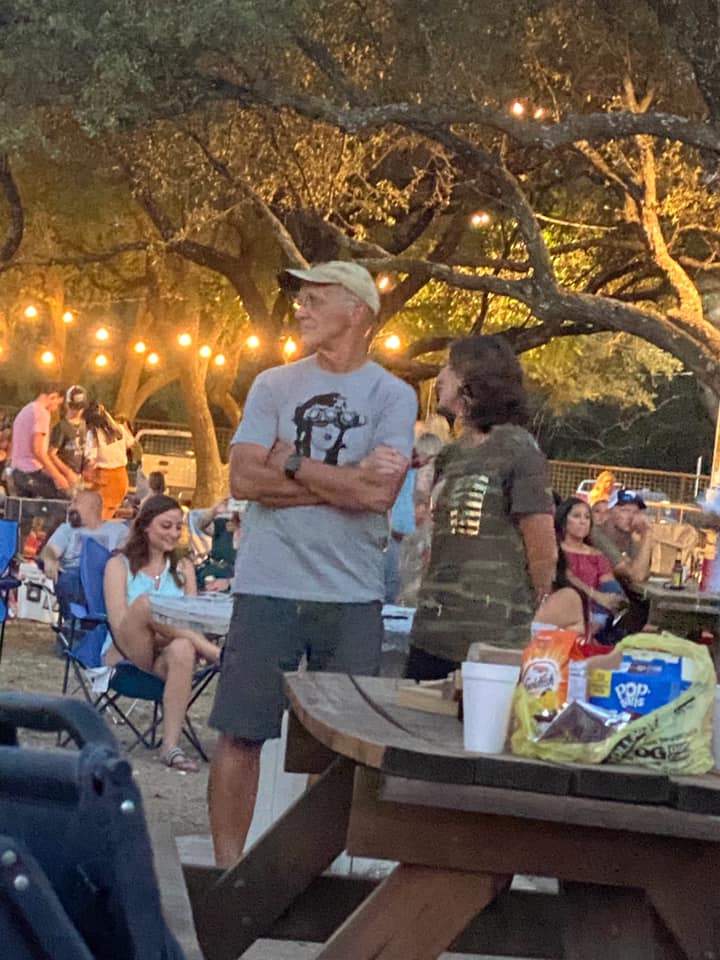 Above: Local Health Authority Dr. James Vretis and his wife at the Kolby Cooper concert at Cooper's BBQ on Saturday, Aug. 8, 2020. (Facebook/Jamey Bauerlein)

The City of San Angelo declared that Vretis was not attending the concert as a patron.

“Last weekend, Dr. Vretis went and visited with the owners of Cooper’s BBQ about what steps they were taking to protect the public. The following day he and his wife went to the concert to see if Cooper’s BBQ was implementing the very guidelines they told him, and he found they were not. Dr. Vretis was six feet from everyone else and was only with his wife,” Brian Groves Public Information Officer for the City stated on Facebook.

Not many believed the explanation. And some wanted him to explain what the box of Pop-Tarts on his picnic table was all about. "No one eats Pop-Tarts at a Texas Country Music concert," one person declared on Facebook.

of COURSE Vretis went to the venue and didn't wear a damn mask. and wearing a cringe boogaloo NODS shirt too.

it doesn't matter if he was staying 6 feet away from everyone else, we can do that at walmart or the gas station or wherever and we still have to wear masks. Vretis must be special i suppose.

idiot.
he's probably asymptomatic himself and spreading the virus with him and his wife everywhere they go.

rules for thee but not for me of course.

to hell with that. why are any of us wearing them when the guy in charge of that stuff here, who NOBODY voted for, doesn't have to wear one?

Live free, but don't forget to pay the price of admission! All about the bucks.

Vretis needs needs to put his

Vretis just needs to put his plastic badge on and go play cops and robbers with the real cops who for some unknown reason, let him dress up and tag along with them to act like a big bad cop himself and just needs to leave making these medical decisions to someone who knows what they are doing and talking about.... He might can prescribe a pill for a sore throat but he's not qualified to dictate all the power that he thinks he's been gifted with....... Idiot !!!!

the tart to the left of Mr. Vretis. Flashbacks of "Basic Instinct" come to mind, for some reason.

...and why does it look like James pissed himself?

Its time people get out of this zombie life that we have been fooled to believe is a must for all humanity.
CUT THE MASK OFF AND KEEP CLEAN!!!

If I see food especially if it is some made Texas brisket, it is optional whether I even have a napkin or paper towel to deal with the bbq sauce. I don’t care and will just wipe it on my shirt sleeve . Haha

But I forget where I left my dentures.

in Angelo State University Dealing with COVID-19 on Campus