The petition was recently filed to remove Mayor Shannon Thomason from his position in late July.

The petition gained widespread support allowing the item to be brought before city council where city officials voted Thursday.

However, Thomason spoke with NewsWest 9 and claims there may have been some laws broken in the petition process.

One version which was obtained by the Big Spring Herald is shown missing a printed name and has only one sentence written in the section questioning why a position should be recalled.

The second version is a copy of the official affidavit which Mayor Thomason obtained directly from the City Secretary's office where it was discovered that a printed name, as well as another line of written text had been added to the recall reasoning section after the document had already been finalized. 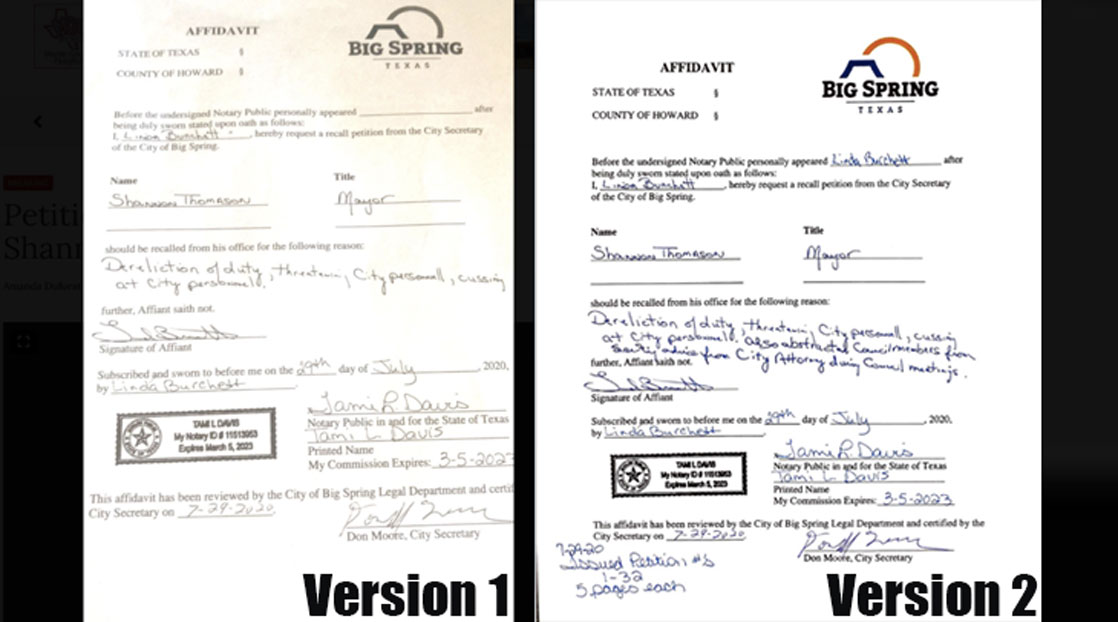 Mayor Thomason claims that he was informed by the City Secretary Don Moore, that Linda Burchett, (the woman who filed the petition) left city hall after the document was notarized and then came back sometime after to add her additional remarks.

The issue with this that an affidavit is a certified government document, which can only be modified at the official time of being notarized by a professional, and any changes should be noted on the document, according to the Secretary of State.

Mayor Thomason added, "When Ms. Burchett came and submitted her statement, and filled out this affidavit form, she was told by the Assistant City Secretary that it was going to take some time to prepare the petition forms. The city wanted 32 copies of the petition, five pages each, in total that's 160 pages, so it was going to take some time. So, Ms. Burchett left with a copy of the affidavit and took it to the Big Spring herald after it had been notarized and after it had been signed by the city secretary,”  said Thomason, “Then she came back.”

Mayor Thomason argued that City Secretary Don Moore later informed him that Linda Burchett made the changes to the official document when she returned to city hall where the altered paperwork was then filed as an original copy, and the official certified petition affidavit.

"It also became a government document at that point", states Mayor Thomason.

Mayor Thomason went on to add, "Those petitions were issued on an invalid affidavit. This document is worthless and this is the copy that's in the city's file right now."

However, Mayor Thomason claims that when he originally brought the issue to City Secretary Don Moore’s attention, nothing was ever done.

“I told him I had a citizen reach out to me on social media showing the two documents, they’re the same, just one is changed, and he ignored it,” Thomason said.

Mayor Thomason believes these actions would legally qualify as tampering with a government document, which is a state jail felony, and a formal complaint has been filed with the Texas Rangers sometime Wednesday afternoon regarding the issue.

Additionally, Mayor Thomason argues that an official oath was never received from Linda Burchett at the time the document was notarized, which is also a practice notaries are required to take, and if proven to be true these actions would completely void the entire petition.

At this time Mayor Thomason is expected to file a formal complaint with the Secretary of State sometime this week to look into the legality of these actions.

In a conversation Wednesday, the Mayor reiterated that, "he is for the best interests of the people, and if they want a recall, they have every right to do so, but they must do so the right way."

Mayor Thomason went on to say, "I support and believe in the citizen's right to recall their elected officials. I think that is a necessary and vital part of the system,” he said, “Where it gets dangerous is when you have politicians start using it to try to gain political power."

The mayor reiterated that it should've been up to the city secretary and assistant city secretary to follow proper notary protocols that's laid out by the Secretary of State, and by them allowing Burchett to return to make changes to a notarized document it voided the entire petition.

“I’m just doing my job. Granted, it’s happening to me, but I’d fight this fight for anybody. People, no matter who you are, must follow the rules,” Mayor Thomason added.

Although there is some legality to be investigated regarding any tampering having been done, none of this changes Thursday's vote, If the council moving forward votes to remove Mayor Thomason from position, then the process will go before the citizens of Big Spring for an official vote.

The Big Spring City Council  voted unanimously Thursday to accept the recall petition for Mayor Thomason during its meeting on Thursday evening without the vote of one councilman, Doug Hartman who was absent.

Big Spring voters will be given the opportunity to decide on election day whether or not they would like Thomason to remain mayor in November.

in San Angelo NAACP Head Awkwardly Claims She was Exploited