OPINION — Alert readers often send me current news items, probably hoping I’ll mention them in my column and they’ll become famous, appearing on television and in movies. Just so you know, that seldom happens. Actually, that never happens. But that’s OK, because I reply to every third reader who sends me stuff, and I mail them a nice Thank You note, along with a huge bag of cash. If you sent me a news item and didn’t get such a package, you were one of the other two.

Several readers recently sent me the same video, which you’ve probably seen, since it went viral pretty quickly. Kyle Burgess made it with a cellular telephone a few weeks ago, during his encounter with a mountain lion in Utah. I gave it a Pucker Factor of 9, making it the highest PF video I’ve seen in a long time.

Kyle was running on Slate Canyon Trail, in Slate Canyon Park, where there seems to be a lot of slate. And canyons, I guess. Either that, or the folks around Provo just like to name things Slate Canyon. And you have to admit it has a nice ring to it. Sounds like a place an Old West Outlaw would hole up to hide out from the law, or something. “Yeah, Ol’ Black Bart, he done skeedaddled off up into Slate Canyon, and the posse just give up. Because of all the slate, you know.”

Anyway, Kyle whipped out his phone and started filming when he saw some cougar kittens playing around in the trail ahead, and actually took a step or two toward them, when all of a sudden, out of the brush, jumped Black Bart.

Not really. It was the kittens’ mother, and she wasn’t happy with Kyle. Not even a little bit. She backed her ears and bared her teeth and hissed and humped her back, and Kyle immediately began to reevaluate his recreational and fitness paradigms. And I have to admit, it was about all I could do not to back up watching the video, even though I was sitting in my office watching it on my computer. This mama meant business, and business was making Kyle load up a batch of gone.

Luckily, Kyle remembered the procedure recommended by the US Fish & Wildlife Service for encounters with angry mountain lion mamas. He started backing up, never turning his back on the beastie, waving his arm (since the other one was holding the cell phone, in order to provide evidence for the forensics team later), and shouting profanities that would make a sailor blush. Wetting your pants is optional, although I definitely would have gone ahead if I’d been Kyle. I nearly wet mine, just watching the video. It was intense.

The cougar backed Kyle along the trail for several minutes, about half a mile, charging and hissing and baring, before he chunked a rock at her and she ran off. The adrenaline rush must’ve been something. For Kyle, anyway. I don’t think the cougar was all that scared.

And neither was the one that snuck up on Steve Shively a week later, in the San Juan National Forest, near Bayfield, Colorado, just east of Durango. Steve was elk hunting, and when he stopped to check his trail cameras, he noticed a cougar staring intently at him, over a rock, from twenty yards away. It kept staring while Steve pulled a 9mm pistol out of his pocket, racked the slide to chamber a round, and took out his cell phone. It only began to reluctantly walk away after Steve started talking to it, and kept looking back as it left. It didn’t seem afraid in the least. 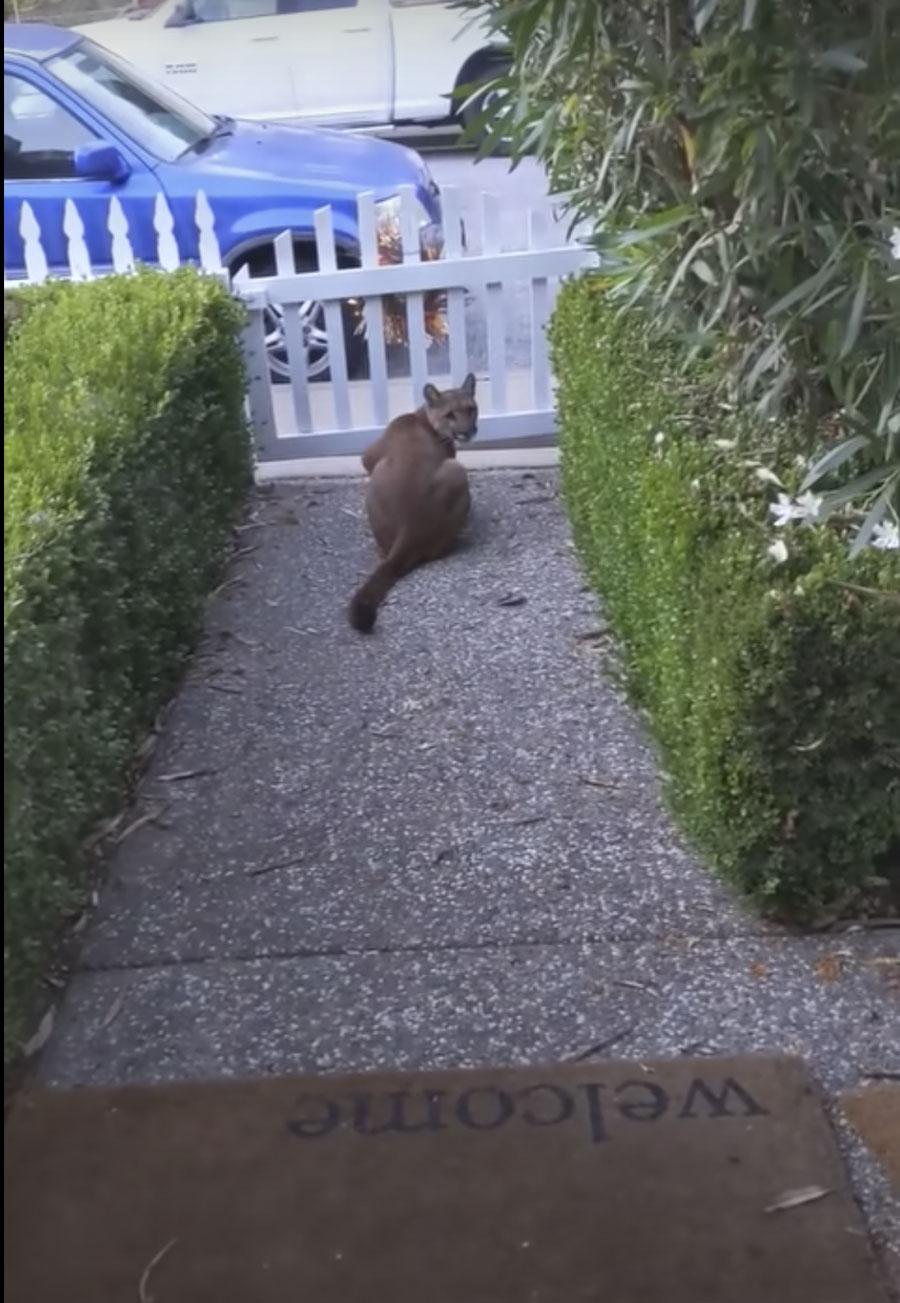 And neither did the one Timothy Kerrisk found in his yard, in a quiet neighborhood in Pacifica, California. That one was crouched down behind the gate in Timothy’s picket fence, flicking its tail and watching two kids riding bikes in the street. Timothy thought it was a dog at first, but when he shouted at it to leave, it turned and looked at him, and he realized it weren’t no dog. Which he should’ve known, because it had chased his cat earlier in the day.

Timothy shouted at the kids to get inside, and the lion casually hopped the fence and hid under a car until Timothy shooed it away. It finally ran off, but hardly out of fear. It just seemed kind of annoyed.

There are a few lessons we can learn from these three lion encounters, which could’ve ended quite differently. In places where mountain lions are protected, by which I mean there are laws against shooting them on sight, they often lose their fear of humans. The mama that ran Kyle off was just being a good mother, and the one staring at Steve may have just been thinking about lunch, and when we’re in wild country we need to remember that it’s wild, and the beasties that live there regard us as either a threat or a meal, or both.

But the lion in Timothy’s yard has evidently become suburbanized, and will eventually kill pets, and probably people. Unfortunately the locals there don’t understand the threat, and don’t want the lion killed or relocated. They just want it to leave their kids and poodles alone.

And one of these days they’ll end up on television, without even sending me any news items . . .

Kendal Hemphill is an outdoor humor columnist and minister who always carries a pistol in the boonies. And extra pants. Write to him at [email protected]