OPINION — These are difficult times, for a humor writer. In the midst of a global pandemic, with a relatively large percentage of the world’s population getting sick, and some actually dying from the disease, it seems callous and hateful to try to make people laugh. A couple of readers have pointed out, in a friendly, caring manner, that I’m a horrible, miserable, hateful, despicable slimeball without a shred of decency, because of my Charmageddon column a couple of weeks ago. I always appreciate feedback from readers. But then they got nasty, and said the column wasn’t funny. That hurt.

Having been an EMT for eight years, and a firefighter for 18 years, I’ve seen some pretty bad situations, and I’ve learned that if you don’t figure out a way to cope with disaster you’ll probably go nuts. So I look for the humor in everything. Either that or I went nuts. It’s kind of hard to tell the difference sometimes.

But I realize not everyone has the same sense of humor as me, and some will not find my columns amusing. If you happen to be one of those I apologize, from the bottom of my heart, liver, kidneys, and of course spleen. It’s not that I don’t care about peoples’ feelings, it’s just that I don’t have feelings, so it’s difficult to relate. Besides, Mark Twain once said the real source of humor is not joy, but sorrow. The catch is that it has to be someone else’s sorrow. So there’s that.

When the first Desert Storm war started, in late 1990, it was impossible to find anything on television except war news. The American people wanted that news, so the networks all complied. After a couple of months someone interviewed a soldier over in the sandbox, and he said the troops were pretty sick of seeing nothing but war on television. They were living it, after all, and if a few of the networks could maybe work in a little sports or comedy that would be great.

So my attitude now is that everyone gets plenty of virus news on TV, radio, and AlGore’s interwebnets, and although that’s relevant and necessary, it’s not my job. The extent of my virus advice would be wearing socks on your ears, anyway, so I’m not what you’d call a reliable source of pertinent virus information. What I can do, about all I can do, is try to offer some comic relief, and hope I don’t offend too many people. Not that I’m opposed to offending people, but we all have to make sacrifices during difficult times. 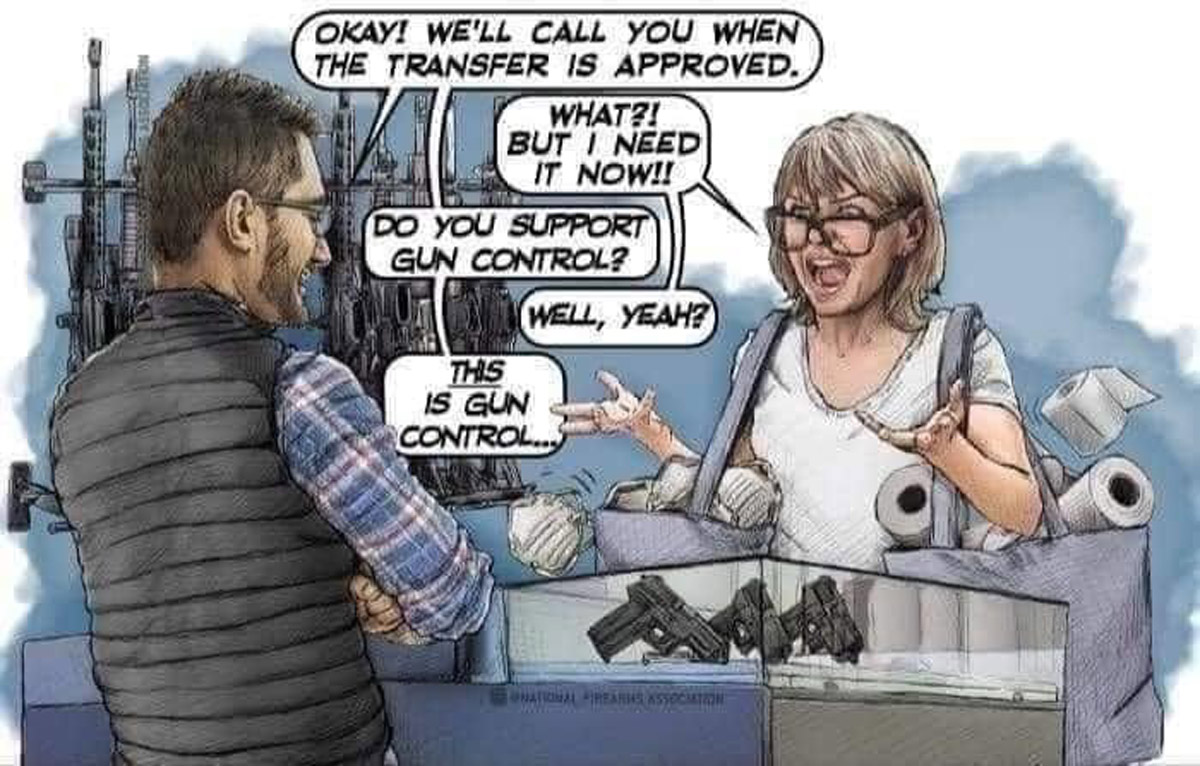 My point is that this column will continue to ignore any real, actual, important, valuable stories that might help you deal with the pandemic, and instead concentrate on my forte, booger jokes and tasteless rudeness. They say laughter is the best medicine, after all, although I don’t recommend counting on that too heavily if you happen to come down with corona. People were laughing before penicillin was invented, and you know how that worked out.

All seriousness aside, this virus, as bad as it is, has given rise to some pretty funny news, besides the fact that many anti-gun people have become pro-gun, and are now appalled that they’ve fallen victim to the unconstitutionally restrictive gun laws they’ve supported for years. One of those is that the states which recently banned the use of plastic bags in favor of reusable shopping containers have done an abrupt about face, and have now banned the use of reusable bags, because they help spread the coronavirus. You might not, personally, find that amusing. You might also wonder why no one invites you to parties. Just sayin.

Another thing this virus has shown us is which institutions are deemed essential, and which we can do without. The essentials, according to most states, include, but are not limited to: gun stores, liquor stores, grocery stores, hospitals, congress, and emergency services such as police and fire departments. I don’t necessarily agree with this list completely, but no one asked me. Or if they did I wasn’t paying attention.

Non-essentials include clothing stores, schools, churches, bait shops, hair salons, movie theaters, Hollywood, and all professional sports franchises. Which says something about out society, I think. How can we call ourselves civilized when we willingly and voluntarily agree to close down our hair salons? Honestly, sometimes I wonder.

One thing we all agree on, however, is the necessity of toilet paper, for obvious reasons. But TP is in short supply in some areas, particularly bathrooms. And that’s not entirely because of hoarding, but because a lot of people are doing their business at home lately, instead of at their business. And it turns out commercial TP is an entirely different product, coming mostly from entirely different companies, than those that supply the private market. Although if you ask me, all TP business should be private. For goodness sake.

The good news is that there’s an alternative. There’s a new product on the market called Clear Rear, which basically turns your common, ordinary, garden variety toilet into a hoity-toity Frenchy bidet. It takes only moments to install, if you’re lucky, and voila! (which is Swedish for ‘you have a bidet!’) you can, at the flip of a switch, unleash a fire-hose-like stream of water at your backside that will launch you into the laundry bin like a Patriot missile. 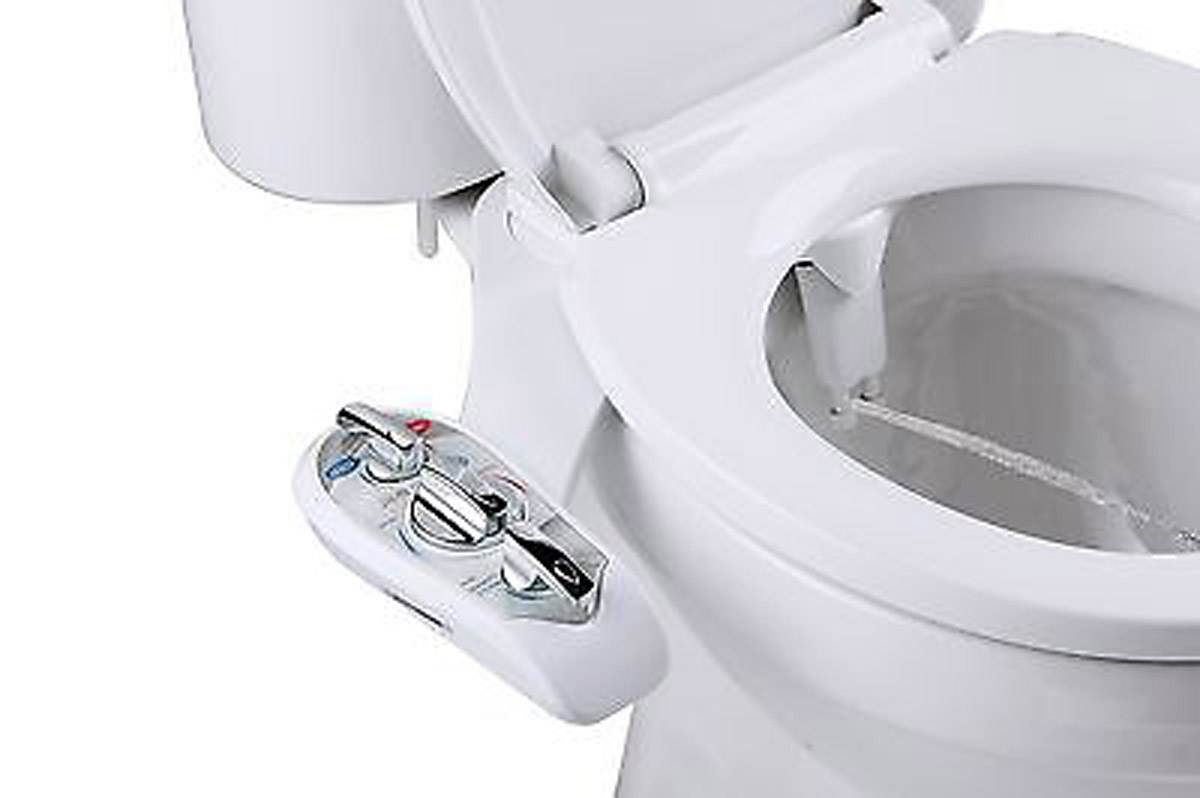 Above:  There’s a new product on the market called Clear Rear, which basically turns your common, ordinary, garden variety toilet into a hoity-toity Frenchy bidet.

I think I’ll pass, since I’m currently using T-shirts I bought in 1987. I’ve still got a few decades’ worth in the closet. No idea what my wife is using. Maybe I’ll let her in the house later and ask her. This social distancing thing is kind of a pain, anyway . . .

Keep up the good work....
It is amazing how the 'principles' of the left can change with the tides of crisis and shortage.

Can you please quit posting this crap? I can only imagine this is a person that LOVES to hear himself talk.

Sorry snowflake, I, like you, sometimes need a good rant.

I also enjoy good writing, not this self indulgent crap.

How inexcusably arrogant of you two to be arguing over petty matters in the midst of the crisis that is emerging:

Can you please stop reading this crap?

Keep em coming, Kendal. This Skyisfalling Chinese virus became laughable some time ago. Twain said the origin of humor was sorrow. I disagree, the origin of humor is self-deprecating. For those of you without the wherewithal to Google, that means the ability to laugh at yourself. Some posters here should try that....

Some of these things happened to me and I kept thinking an invisible mildew goat was following me everywhere.

Well as it turned out, I do have a touch of “paranoid schizophrenia “, and a great imagination.

However, the reality was that I hadn’t taken a bath or shaved for 4 days.

It turns out, the mildew goat following me

Take Your Ass Back Liberal Dallas