OPINION — Since several readers have written to let us know that last week’s Christmas Gift Guide was pretty skimpy on gift ideas, we’ve decided to hit that nail again this week, and offer a few more fantastic ways to waste your money this year. We admit last week’s guide left something to be desired, offering only an ugly pickup and an exercise bike, and there are many other horrible products to consider. We realize time is short, but you can’t blame that on us. You’re the one who waited until the last minute to do your shopping.

But before we get into any more gift suggestions, we would be remiss if we didn’t mention that Elon Musk’s stock took a nose dive after his disastrous pickup unveiling, to the tune of about $770 million. So if you’re interested in helping the needy, you might actually consider buying his cybertruck. You never know, the windows in yours might not break.

Peloton, the company that makes the other product mentioned last week, also took a hit after their commercial came out. People were outraged that a man would give his wife an exercise bike for Christmas, and the actors in the commercial have been attacked, personally. Sean Hunter, the guy who played the husband in the ad, is a part-time actor and a full-time elementary school teacher in Vancouver. At least, for now. The mob is forming, complete with torches and pitchforks, so Ol’ Sean may not last long.

Sean, according to the whiny liberal crowd, is now a ‘symbol of the patriarchy.’ Evidently that’s a bad thing. One twitter complaint, from someone called ‘@allahpundit,’ wrote ‘Absolutely 100% chance that the husband in the Peloton ad is abusive.’ Which is quite an astute observation, since Sean was shown in the commercial for a total of five seconds. Obviously, giving your wife a gift she wants for Christmas is wrong and sexist. Duly noted.

Monica Ruiz, who played the Peloton Wife, has fared slightly better. She was blasted for a while, but then Ryan Reynolds saved her. Reynolds has a company called Aviation Gin, which, surprisingly, sells gin, and he offered her a spot in a commercial. She played the part of Peloton Wife Who Left Her Patriarchal Abusive Husband Because He Gave Her An Exercise Bike For Christmas. In the gin commercial she’s sitting in a bar with two friends, drinking herself catatonic on Aviation Gin. This is apparently far more acceptable to the woke crowd than being the loving wife of a man who buys her what she wants and keeps herself in shape. Duly noted.

Enough about last week’s gift ideas. There are plenty of other horrible products to choose from if you’re still shopping. But before we get to those, it would be a shame if we didn’t mention the Vegas Cowboy Pigeons. Actually, The Vegas Cowboy Pigeons would make a fair name for a country band.

Someone in Lost Wages, Nevada is evidently catching pigeons and putting little cowboy hats on them, and then turning them loose again. They’re turning up all over the city, and no one has, as yet, taken credit. Residents have theorized that the Mad Pigeon Hatter is doing it because the rodeo is in town, but the culprit remains anonymous.

Mariah Hillman, who runs a local animal rescue and pigeon advocacy group called Lofty Hopes, said, “At first I was like, OMG, that’s cute! Then I was like, wait a minute – how did they get those hats on there?” Maybe they, like, glued them. Or something. Mariah is trying to figure out how to catch the birds and remove the hats, but so far she’s stumped. My suggestion would be to shoot the pigeons, but somehow I doubt she’d like that idea a whole lot.

Anyway, we only have time for one more gift suggestion this week, but it’s a doozie, especially if you have a friend who is vertically challenged. Dominic Wilcox has invented something called One Foot Taller Periscope Glasses,’ which allow short people to look like idiots. The glasses also, according to Dominic, allow short people to see over the heads of taller people, which is a major advantage approximately 0.005 percent of the time. 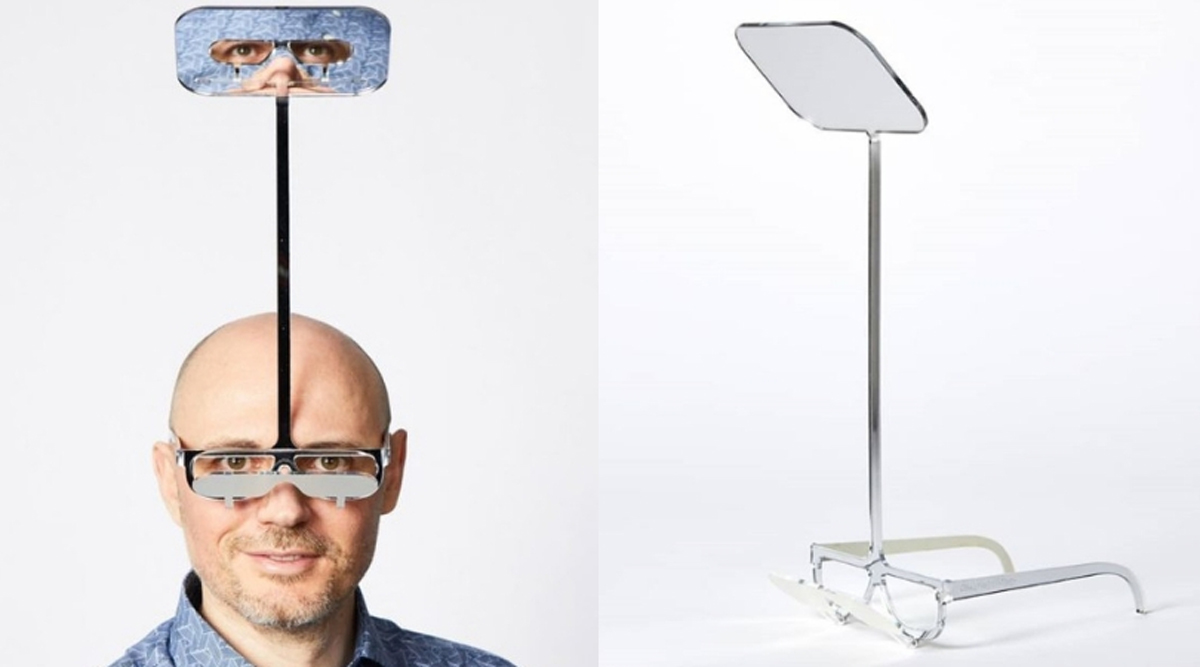 Above: One Foot Taller Periscope Glasses

The glasses have angled mirrors for lenses, and a stem that extends about a foot upward from the nose area and holds up another set of angled mirrors, so the wearer can see over walls and tall people, and probably shower curtains and restroom stall walls. We’re just spitballing, here, but it seems to us these glasses are liable to get some small people into big trouble.

There’s also the risk of people becoming crosseyed, like what happened with Navin R. Johnson’s Optigrab invention in the movie The Jerk, which was probably the funniest movie ever made. So if anyone actually buys these things, please let us know how it goes, so we can ridicule you in print.

And if you have a ten-year-old with a pellet gun, you might want to contact Lofty Hopes in Vegas. They’ve got a pigeon problem out there . . .

I'm not altogether hardened against the possibility of divine intervention in the Christian sense. Could it be that these pigeons are wearing hats because there is a God?

Something to think about.

Mariah needs to just relax, no one is going around gluing hats on pigeons, that's just silly. It's also just a waste of time. The glue would most likely make the feathers stick to the pigeons scalps before it glued the hats to their heads. First heavy rain that glue is done. Obviously someone is using a tiny stapler or a push pins to make sure they don't fall off.

So you concede that this phenomenon is inexplicable?

I always wonder about people that like to dress up animals. Some dogs do look cute in a sweater. I would advise against trying to put clothes on your pet cat. I have owned both cats and dogs. The dog was fun to take for a walk. When I tried to take the cat for a walk though, it didn’t turn out so well.I named him Tigger. He let me put the leash on him, but escaped from my grasp and climbed into a short fig tree. I climbed up to try and get him down.

It was at that time he scratched my arm with his paw and I almost fell out of the tree.

Was also at that time I realized this cat had a higher iq. About that time was when a friend walk out n asked what is going on out here.

Get down from that tree.

Sort of in denial about pretending I am only a dog person because I still get a little melancholy when I am reminded of all the adventures or stories that tigger and I went through.

by I dont really care