DALLAS, TX — B-17G N7227C was involved in a fatal crash over Dallas Executive Airport (the old Redbird Airport) in south Dallas Saturday. The Commemorative Air Force B-17G was nicknamed the “Texas Raiders” and was based in Conroe. The NTSB said five crew members perished when the old bomber was hit from behind by a vintage P-63 Kingcobra on Saturday, November 12. The pilot of the P-63 was also killed.

Texas Raiders had a long history with the Commemorative Air Force, an organization that grew out of humble beginnings at Rebel Field in Mercedes in the Rio Grande Valley. There, retired military pilots and crop duster pilots, some of the pilots were both, set forth to preserve WWII aviation history by restoring WWII fighter planes. 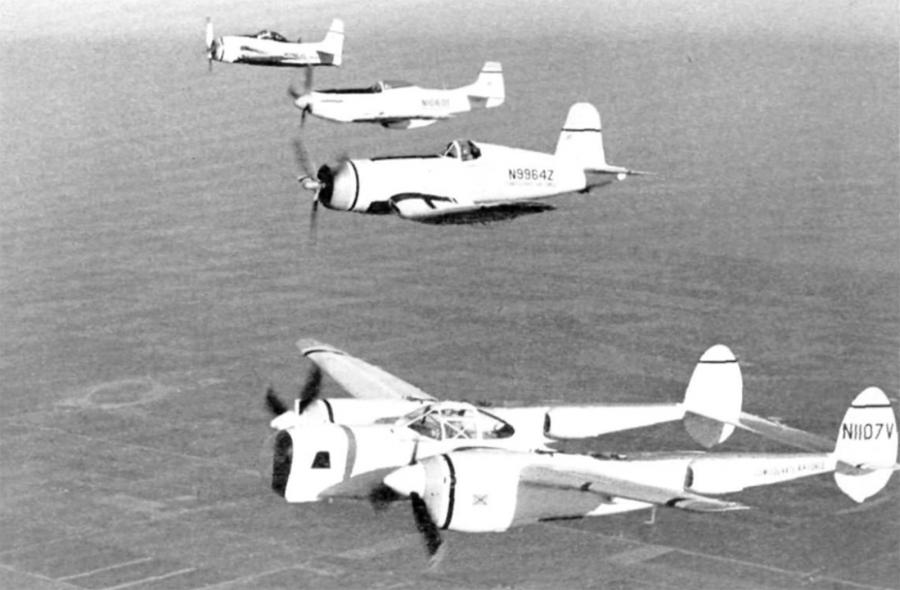 The original CAF fighters. Four great planes, the F8F Bearcat (top), P-51 Mustang, F4U Corsair and P-38 Lightning, sparkle in the Rio Grande Valley sun as their joy-seeking pilots prepare to peel off for low-level strafing runs that may scare even the boll weevils in the cotton fields below. (From an August 12, 1963 article in Sports Illustrated by Dan Jenkins)

There was the P-51, then a Bearcat, and before long, the group of old aviators appointed each of themselves the rank of “Colonel” in the Confederate Air Force and operated a squadron of the WWII piston planes. 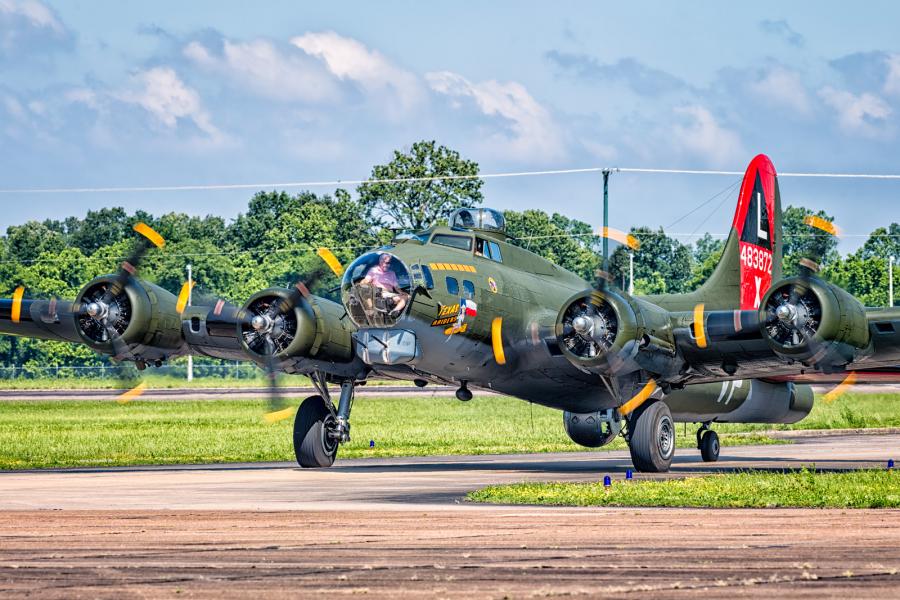 B-17G "Texas Raiders" operated by the Gulf Coast Wing of the Commemorative Air Force at the Millington Regional Jetport on May 13, 2017. (Photo by Angelo Bufalino, used with permission)

Years later, in 2001, the organization dropped “Confederate” and renamed themselves the Commemorative Air Force. There was never anything “Confederate” at all about the aviation history restoration project other than whimsical joking. By the turn of the century, times had changed and corporate sponsorships demanded a new image.

After 10 identified WWII fighters were restored during the early 1960s, the growing organization began acquiring old bombers from WWII. B-17G N7227C was one on those. The CAF gained ownership of it on September 25, 1967 from an aerial surveying company. The plane was temporarily housed at Brownwood Municipal Airport until the CAF could complete its move from Mercedes to Harlingen’s airport. The runway at Mercedes wasn’t long enough for the old bomber. The purchase price was $50,000 and $30,000 of that amount was a non-cash leaseback arrangement with its former owner. 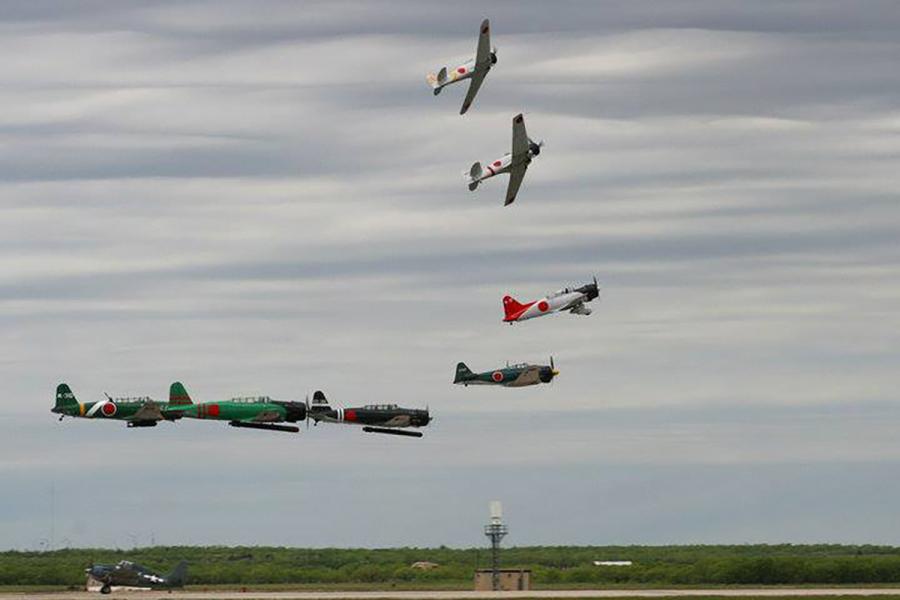 the "Tora! Tora! Tora!" re-enactment in a photo from the 1970s on the Gulf Coast Wing's Website at B17TexasRaiders.com.

On that fateful day in Hawaii in 1941, a formation of B-17s was arriving from the States at Oahu at about the same time the first wave of the Japanese air attack. Low on fuel, and with one main gear stuck in the “up” position after being shot up by a Japanese war plane, one brave B-17 pilot landed his plane with one of the main gears up. A modern demonstration of this is a favorite at CAF airshows where Texas Raiders would approach the runway with only one of the two main gear extended, simulating the emergency landing that in real life in 1941 ended with a ground loop (for the non-aviators, it’s more like a ground spin not a vertical loop). For the re-enactment, however, the ground loop was skipped. The pilot would carefully touch the gear on the runway while performing a touch-and-go. 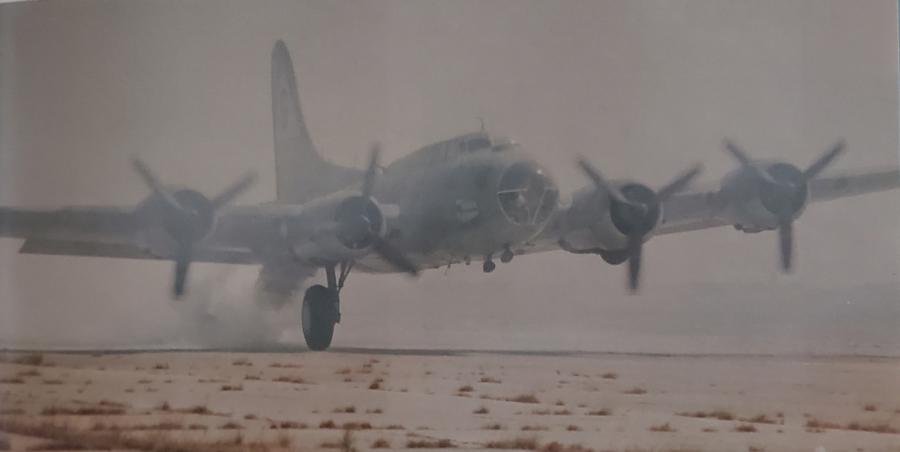 The one-wheeled touch-and-go performed for years by the pilots of Texas Raiders until Boeing told the Gulf Coast Wing that structurally this wasn't a good idea. (Photo on B17TexasRaiders.com)

For years, the CAF has performed the “Tora!” show with Texas Raiders approaching the runway with only one main gear down. Today, however, no gear on the B-17 touched the runway. After a safety bulletin from Boeing was published years ago, the CAF touch-and-go has been replaced with a “single main gear up” low approach.

At Saturday’s air show, the planes were performing what CAF President Henry “Hank” Coates said was a World War II aerial choreography called “Bombers on Parade.” He said the maneuvers for this portion of the show were not dynamic. The “Tora!” portion of the show had already been performed, according to the show’s schedule. During the “Parade,” the B-17 along with other CAF bombers like the B-24, B-25, and A-26, conducted a fly-by right down air show center above Redbird’s runway 31 in sequence while the faster and more maneuverable fighters were performing well above the bomber stream.

Sometime while the Texas Raiders was flying down the runway, according to multiple home videos posted online, the P-63 seemingly came out of nowhere and sliced the fuselage of the old B-17 just aft of the wings. The crash claimed six lives who haven’t yet been officially named pending notification of next-of-kin.

The NTSB said the preliminary investigation will take several weeks with a report scheduled to be published at around the New Year. It will take 12 to 18 months for the final report.

On Saturday, still shaken, Coates told the press that the crash has greatly saddened the organization he leads.

“It’s a close knit family. Everybody knows everybody,” he said. He said the pilots conducting these shows are very experienced.

“Many have been flying for us for 20 or 30 years or longer. This is not their first rodeo,” he said. 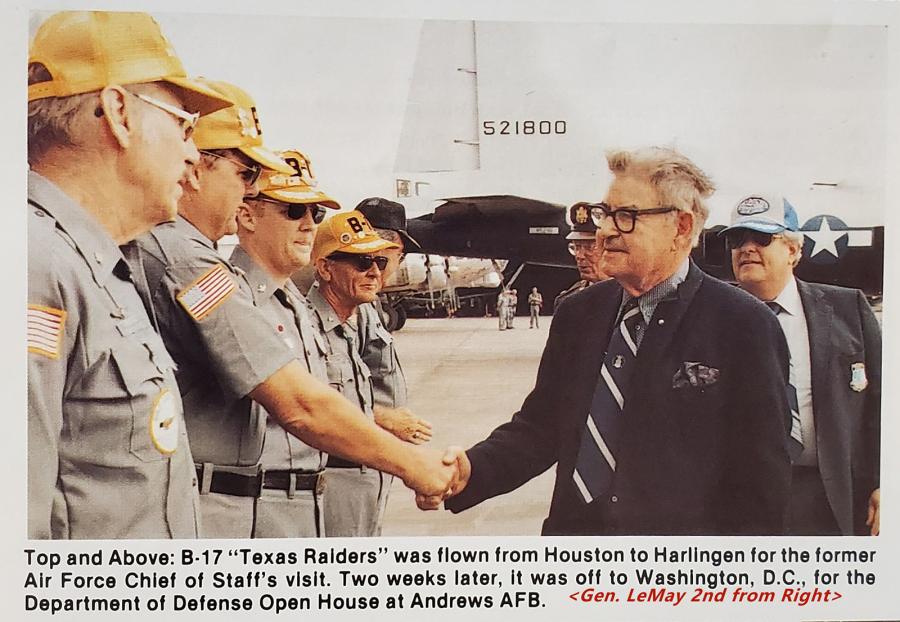 General Curtis Lemay (second from right shaking hands), the iconic bomber wing commander from WWII and founder of the Strategic Air Command had advice for naming the restored CAF B-17. Do not name it after an existing B-17. Rather, make the name generic. He also advised the CAF on the somewhat original paint scheme that was revised years later.

The loss of life is tragic. Almost as tragic is the loss of flying history Saturday’s crash caused.

The final 8 B-17s that were still flying met at an airshow in Michigan in 2010. Today, only three remain airworthy.

Back in 2010, Texas Raiders was on tour after a longterm, multi-year restoration project. The Gulf Coast Wing had moved from Ellington Field in Clear Lake to David Wayne Hooks airport in Spring in northwest Houston away from the corrosive salt water air. That year, celebrating the B-17’s 70th year there was a gathering of all still-flying B-17s at the Thunder Over Michigan air show. Including Texas Raiders, there were eight remaining. One of Texas Raiders’ brothers, B-17G Nine-O-Nine, crashed in Connecticut in October 2019. Three more have since been grounded. What remains are only three operational and flying B-17s in the world today.

A commercial from the 1980s featuring CAF B-17 named "Sentimental Journey" that was filmed near Rankin. Texas Raiders at that time was undergoing a restoration.

The author, Joe Hyde, is a B-52G and H instructor pilot and T-38A/C IP with over 6200 flying hours. Growing up in the Houston area, and later as a frequent participant in air shows as a T-shirt vendor while in college with CC Creations and then as an Air Force pilot, he became well acquainted with Houston’s Gulf Coast Wing and Texas Raiders. This piece is a tribute to all of the volunteers and pilots who have given thousands of hours of time and their selfless dedication to keeping history alive and inspiring our youth to pursue aviation and military careers. It is also a subtle reminder that life is valuable but oftentimes tragic. Our prayers are with the families who must endure this horrific tragedy.

Photo notes: The black and white photo of the four CAF fighters is from the 1963 article about the formation of the CAF. The online version is here. The cover photo was licensed from the photographer. Other photos used are from an extensive history of the Texas Raiders on the CAF Gulf Coast Wing's website. Click here for the full story about the Oahu emergency landing of the B-17 by Lt. Robert Thacker during the Japanese attack on Pearl Harbor.

I recall the time I watched a Catalina PBY set/splash down on Devil's River up from Amistad while on a water skiing weekend.  After getting out of the plane's way and letting it power down and settle we motored up to it and chatted with the owner/pilot.  As I recall he was out of Midland, had a previous military association with this type of aircraft, and had the resources to own, maintain, and fly one.  I cannot help but wonder if he is associated with some of the folks you know in this arena since not just everybody knows and loves such an aircraft enough to own and operate one.

Anyway, he and we chatted, the local park ranger folks motored up and basically wrote him a ticket for an unapproved lake landing (it seems there are rules regarding such things), the park rangers and we moved away from the aircraft, the pilot/owner powered it up, and he and his guests took off.  The whole thing was a hoot.  I wish I had had a camera. In today's world had I recorded the whole thing and posted it it would have gone viral.

Anyway, I hate what happened the other day and mourn the loss of those who died.  Further, I have nothing but respect for the people and organizations you have described.  I also wonder if the guy I met on Devil's River in that PBY is someone in that group of worthies.