The Sisters of the Twisted Root

The Twisted Root Burger Company is nearing completion downtown on the banks of the Concho River, 333 S. Chadbourne St. Partners Lana Mott and Lori Francks are putting the finishing touches on the gourmet burger restaurant that is a franchise of the popular original Twisted Root location on Commerce St. in Deep Ellum in Dallas. 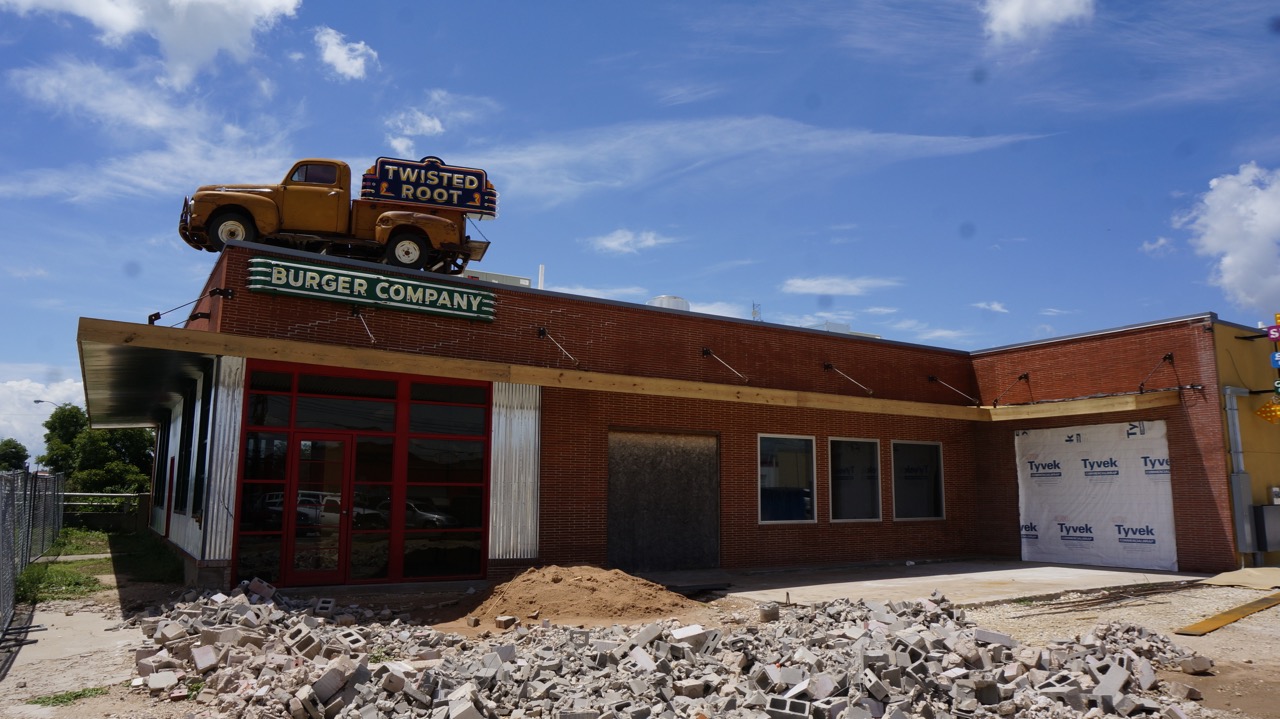 Above: The exterior of the Twisted Root Restaurant in San Angelo 30-40 days before its soft opening. (LIVE! Photo/Joe Hyde)

The restaurant was scheduled to open in March, but usual delays in construction, particularly in restoring a long-abandoned building that was originally built to house offices of the General Telephone Company in the late-1950s, has taken its toll on the schedule.

Above: The same building in May 2014 when we first reported on the Twisted Root coming to San Angelo, TX. (LIVE! Photo/Joe Hyde) 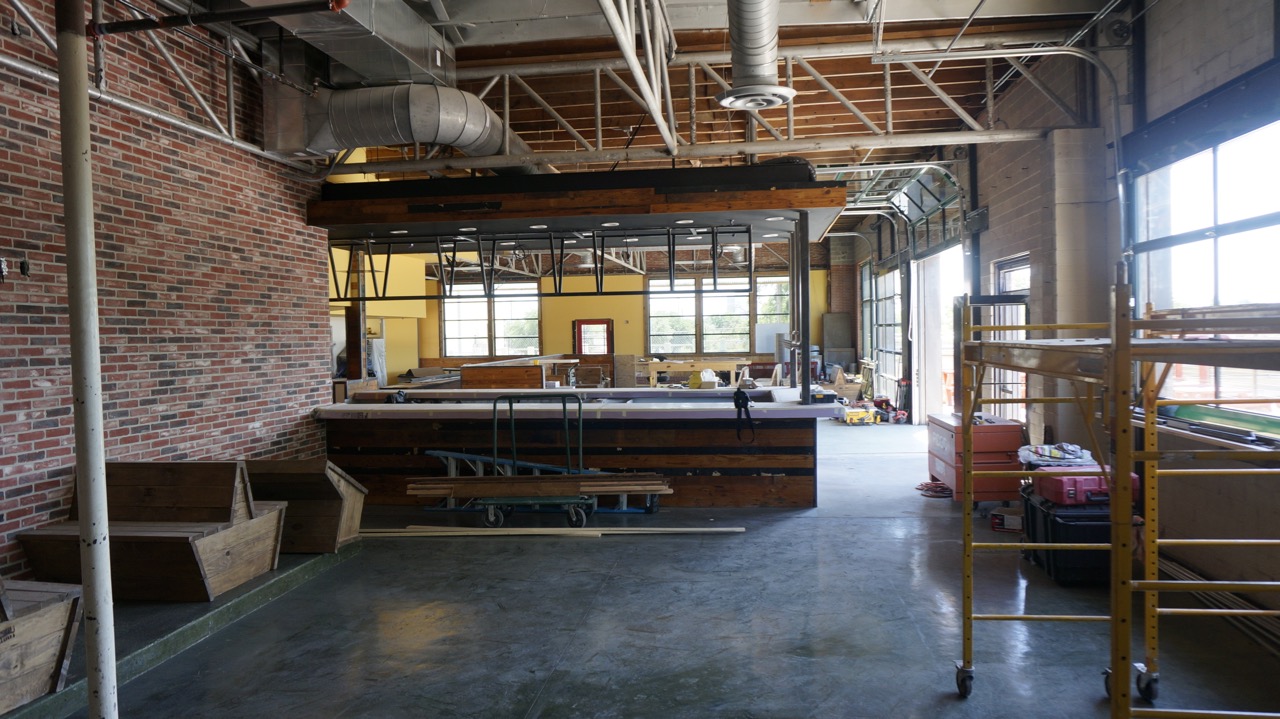 Above: The interior of the Twisted Root, 30-40 days before opening. (LIVE! Photo/Joe Hyde)

The building is taking shape since the first time we reported on it in May 2014. The signature “old truck” sign is in place, and most of the interior furnishings, including the state-of-the-art kitchen, are installed inside. The parking lot is waiting to be cleared and paved. A look around the inside, one sees the eatery coming together. 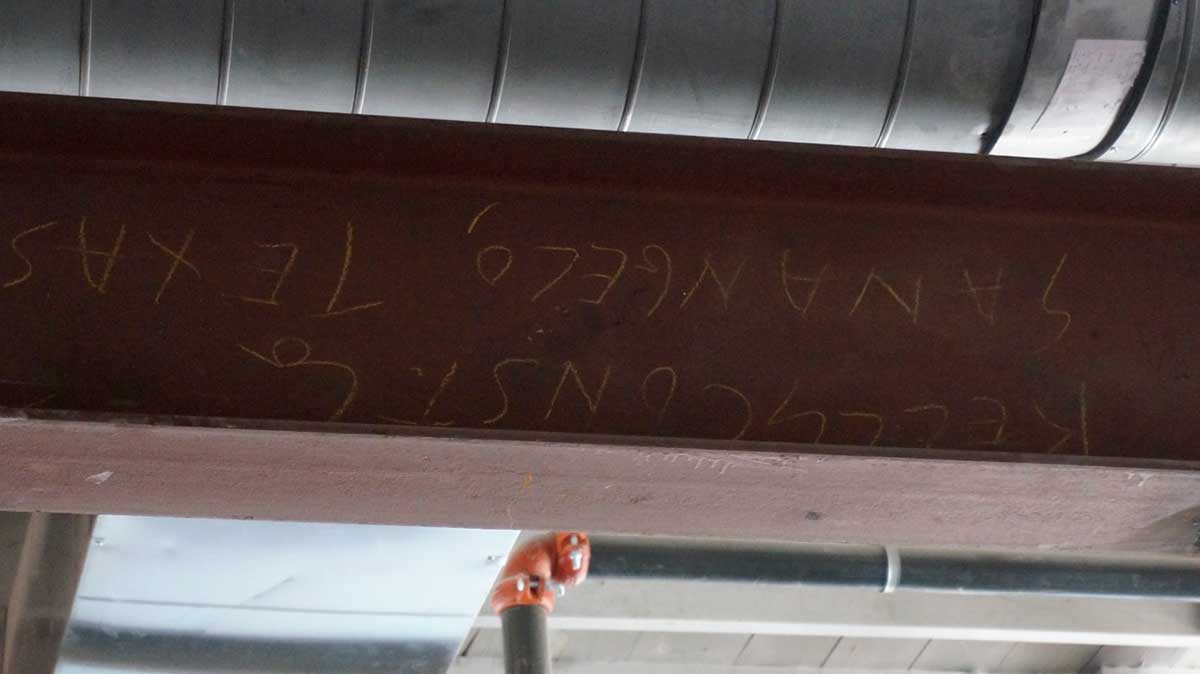 Above: Original chalk writing on the beams in the ceiling of the 1950s-era building. (LIVE! Photo/Joe Hyde)

The centerpiece of the restaurant is the view of the Concho River; complete with a large deck that is almost half the size of the indoor dining area. Borrowing a page out of Twin Peaks Restuarant, a wrap-around center bar has a “beer bar” of 25-30 beer taps ready to serve ice-cold beer. 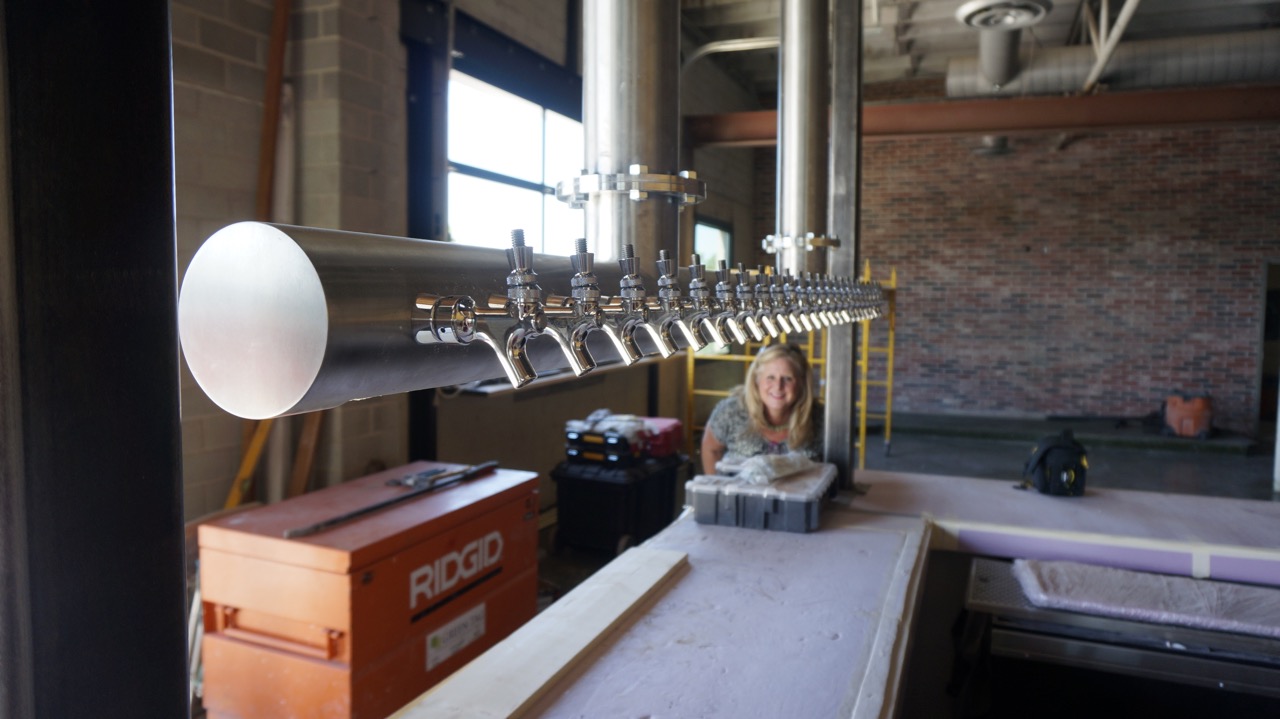 Above: Lori Francks behind the bar of beer taps that will soon be flowing at the Twisted Root, 333 S. Chadbourne St. in San Angelo. (LIVE! Photo/Joe Hyde)

The Twisted Root will also offer a separate dining area attached to a private portion of the large deck for private parties.

The interior is retro-1950s nostalgia of all things San Angelo, up to and including a replica of an old Neff’s Amusement Park sign built into the ceiling. The amusement park, train, and a putt-putt golf course were formerly located below the back deck, on the river. 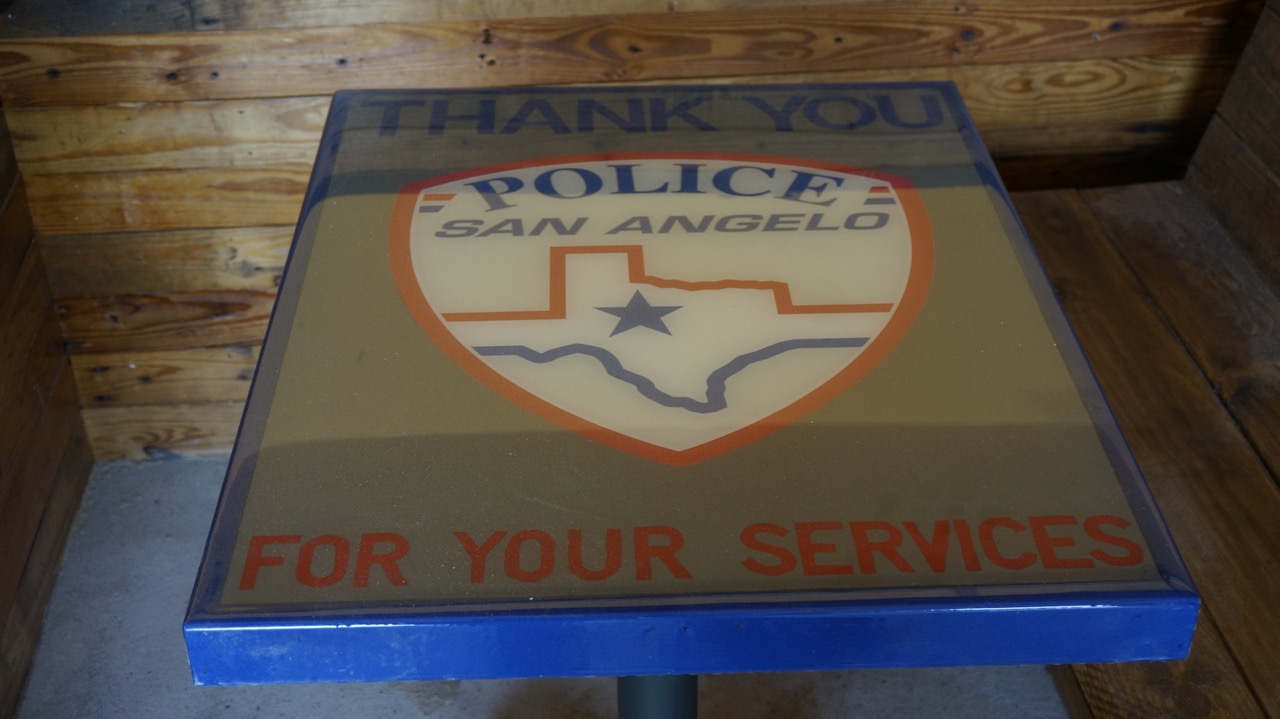 The Twisted Root franchiser wants it that way. 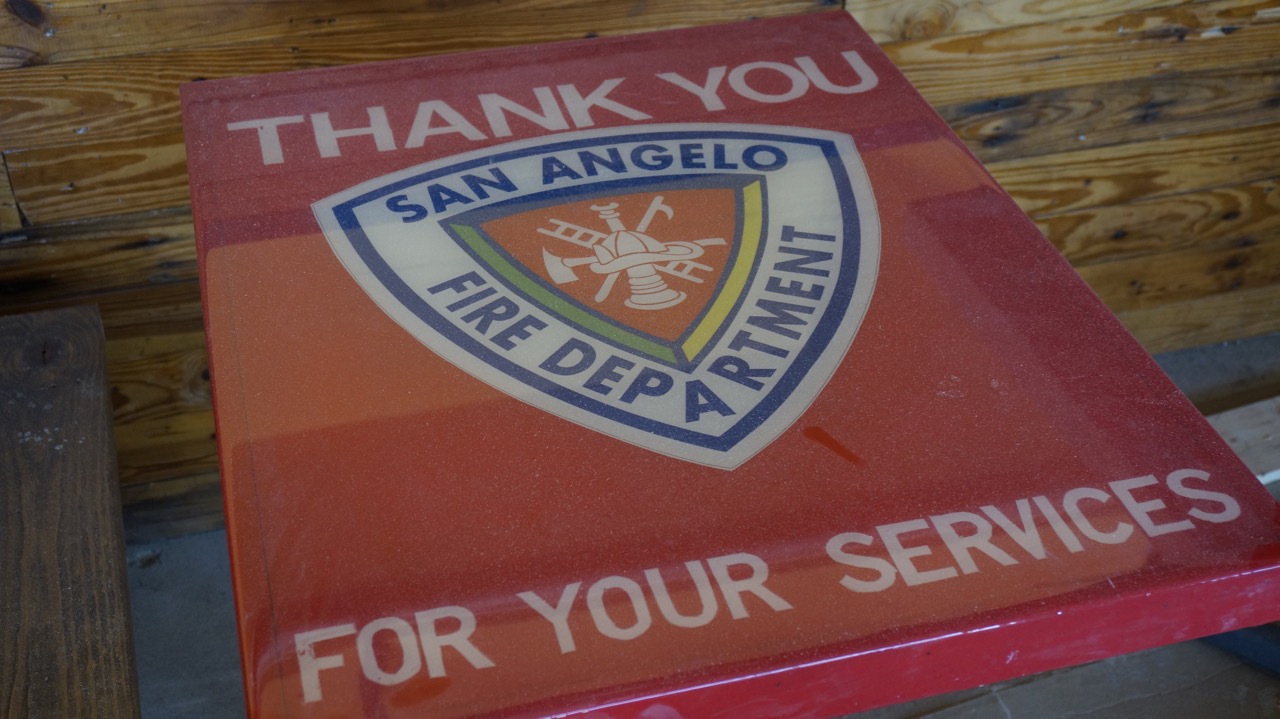 Above: Another table is a tribute to the San Angelo Fire Department. (LIVE! Photo/Joe Hyde)

Mott said that the Twisted Root franchise retains control of the kitchen, because that’s their expertise. The building selection, and how the dining area is decorated and furnished, is up to each franchise owner. “We like that kind of freedom because we aren’t experts with running a commercial kitchen, and they’ve already figured out,” said Mott.

The franchise provided the partners the freedom to use their own creativity, and at the same time the security of having figured out the business model that works. 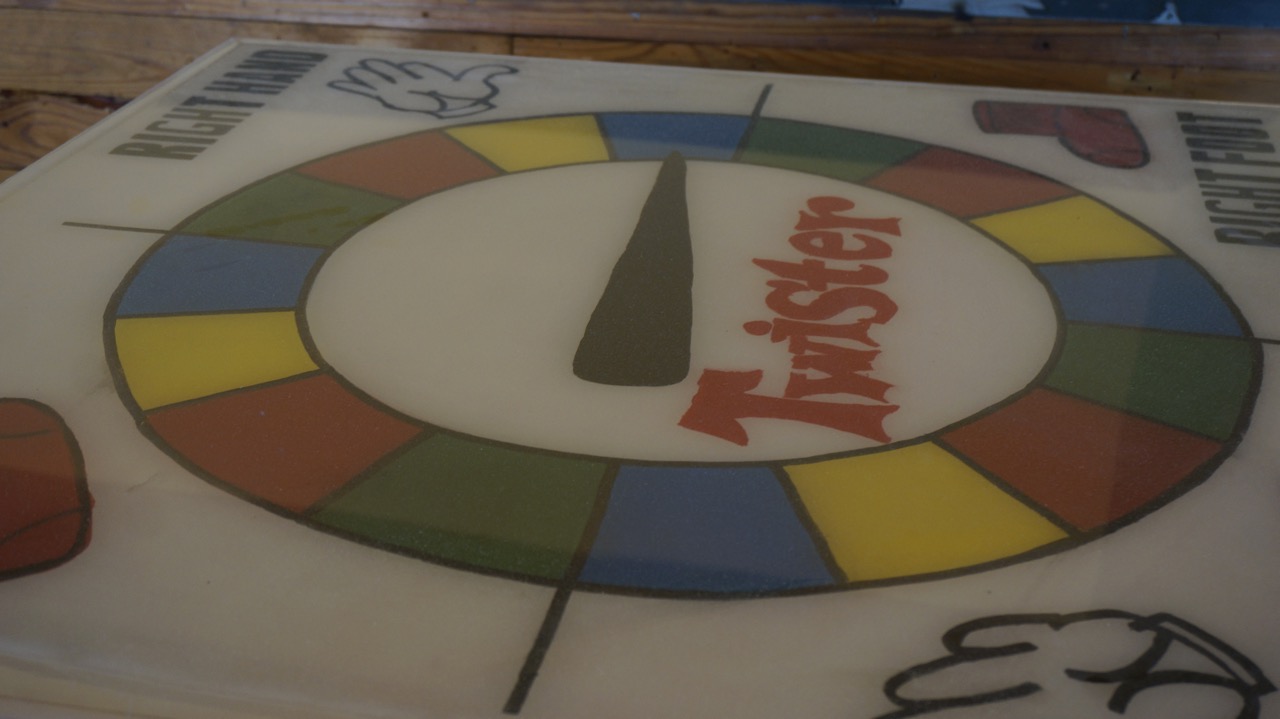 Above: One table has a replica of the 1960s-era “Twister” game that both partners fondly remember from their childhood in west Texas. (LIVE! Photo/Joe Hyde)

“They have a system and it works,” added Francks.

“All Twisted Roots are different because of that,” said Mott. “One is a movie theater, another is an RV park,” Mott said, listing examples of the innovation of each and every Twisted Root franchise location throughout the south. There are 10 Root locations in DFW, one in Shreveport, one in Austin, on in Waco, and another soon to be built in Alabama, Mott said. Above: The architect maintained and restored the original flooring in the dining area of the Twisted Root in San Angelo. (LIVE! Photo/Joe Hyde)

Francks and Mott have been friends for years, and a series of events led them to join together in this partnership to bring the Twisted Root to San Angelo.

Francks was an investment advisor at UBS Financial Services. She retired in 2011 after enduring two tragic events in her life. Her father, and partner, died in March 2008. In January 2009, her husband died. “My husband always wanted to own a piece of downtown,” Francks said. Above: The Jimmy Hoffa mystery will be explored once the restaurant opens in mid-August. (LIVE! Photo/Joe Hyde)

After resting for a while after retiring, Francks said it was time to do something fun. She didn’t say this exactly, but honoring the dream of her husband was surely a motivator for this project.

Mott is a former schoolteacher, but more recently was in medical equipment sales. Mott’s brother and mother are the owners of the popular Catfish Corner in San Angelo and Abilene. She has experience in her family’s business, albeit from somewhat afar since one fateful day long ago. As a young waitress at the family restaurant, a male patron made what Mott relayed was a very inappropriate and suggestive remark to her. “And there was a lady seated with him and everything!” Mott exclaimed. Mott didn’t have patience for any of that so she dumped an entire pitcher of iced tea in the offending man’s lap. Needless to say, the family was relieved when Mott went another direction that didn’t include waitressing at the Catfish Corner. Above: The expansive back patio that overlooks the recently cleared Concho River in downtown San Angelo, TX. (LIVE! Photo/Joe Hyde)

Earlier this decade, before discovering the Twisted Root idea, Francks and Mott were designing a line of Christian jewelry, crosses and religious pendants, or, as Mott described, a more holy version of James Avery. It was fun, but wasn’t exactly what both women wanted to do forever, Mott said.

The two became fans of the popular TV series “Diners, Drive-ins, and Dives.” Inspired, Mott dragged Francks (or the other way around) along for a tour of restaurants in Dallas depicted on the show. The original Twisted Root in Deep Ellum was one of them. “They had the best burger I ever tasted,” Francks said.

With the idea of contributing to the revitalization of downtown San Angelo, Francks said she thought about franchising the Twisted Root. Being a savvy investment advisor, Francks appreciated the head start a franchising offered. “I didn’t want to do anything without a franchise,” she said. Above: The exterior of the Twisted Root Restaurant in San Angelo 30-40 days before its soft opening. (LIVE! Photo/Joe Hyde)

“We really liked the two owners. We liked their story. They’re very personable. They’re very down to earth. They both went to culinary school…” Francks said.

“It’s truly like a ‘mom and pop’ franchise,” Mott added. “They want you to do your own thing. They’re (the restaurants) are all different. It’s just fun. It’s different and unique,” said Mott.

The partners have enlisted the assistance of many in San Angelo for help building the restaurant. Bill McClanahan is the structural engineer and local architect Henry Schmidt, who has experience with restoration projects downtown, created the building’s design. When the two settled on the idea of opening a Twisted Root in San Angelo, both knew exactly the location they wanted—the abandoned building on S. Chadbourne.

“I never walked inside, but we really and truly knew this location was perfect for the restaurant,” said Francks. Mott added that both of them, unknown to each other, had been looking at the location for years.

The challenge was the building wasn’t for sale. They enlisted the help of Nancy Vincent at Addresses Real Estate. Soon the deal was struck, and the project has taken about three years to launch. Above: A view from the dining room to the order counter for delicious Twisted Root burgers. (LIVE! Photo/Joe Hyde)

The City of San Angelo was extremely helpful in starting the project. Francks said that when she contacted the city inquiring about what needs to be done to bring the building up to code, they arranged a meeting with both partners at the Business Resource Center on Chadbourne. “You go in there and explain what your idea is, and show them what you want to do, and they get everyone at the city and elsewhere who may be involved in your project to come to one meeting and tell you exactly what needs to be done (as far as licensing, health inspections, permits, fire inspections, and etc.),” said Mott. “The support was amazing.”

“We went there three times to meet,” added Francks. “The first time, we didn’t have anything but a napkin.”

“They directed us on what we needed to accomplish to make this happen,” Mott said.

The only roadblock, if you can call it that, was a conflict with the city engineers over the above ground sewer main that the city was laying far below the building along the banks of the Concho River. The partners desired to build a large overhanging porch from the back of the restaurant, and the pilings for the piers were in the direct path of where the city was planning to lay pipe. “It was in the way,” said Mott. “The city engineers were not going to move, whether it was just five inches or six feet, one way or the other. So we had a hard time getting the plans for the patio approved,” Mott explained. “Finally, it got to a point where I called Mayor Dwain Morrison and asked for a little help.”

Mott said that the mayor called her back the next day, learned the situation, and set up a meeting with all involved parties at the city. The parties struck a compromise at the meeting, and the problem was solved. “He was really instrumental in getting our patio approved. Now look at it!” Mott said.

“People are always suggesting to us that since we’re building in the city, downtown, that the city is delaying us. It’s not the city. The city has been great and I have all of the praise of everyone at the city,” Mott said.

The partners may be speaking prematurely, however. The remaining issue with the city is obtaining code compliance for their beer keg urinals for the men’s room. “They have them in Galveston, why can’t we get them approved here?” Francks asked. “It’s stainless steel. Seriously!” Mott added. Above: These were formerly beer kegs that the partners desire to repurpose as urinals for the men’s room, if the city code compliance inspectors will allow it. (LIVE! Photo/Joe Hyde)

The partners expect to have a soft opening in mid-August 2015.