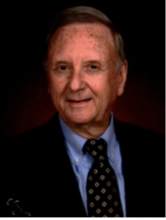 Melvin Jennings passed away peacefully on Saturday, August 13, 2022, at the age of 93. He was born March 5, 1929 in Blevens, Texas to Melvin Napoleon Jennings and Opal Audrie Johnson.

Melvin graduated from Chico High School in Chico, Texas in 1945. Upon graduation he began a series of positions with Western Electric, Southwest Associated Telephone and General Telephone & Electronics. His work took him to many towns in Texas, including Childress where he met and married Angeleene (Angie) Pence in 1949. Melvin advanced in his positions with GTE prior to accepting a foreign assignment to Brazil from 1977 to 1979. After his return from Brazil, he was located in San Angelo where he served as Vice President of Operations for GTE until his retirement in 1984.
After his retirement, Melvin immersed himself in learning about real estate and began a second career in real estate investments with Jennings-Sefcik Investments, which he co-founded with his friend Jerry Sefcik. He went to the office every day and was still very active in the real estate business at the time of his death.

Throughout his life Melvin was involved in community service and the Baptist Church as he served on various boards and committees.

A memorial service celebrating Melvin’s life will be held at 10:00 am on Saturday, August 20, 2022, at the Chapel of the First Baptist Church, 37 E Harris Ave, San Angelo, TX. In lieu of flowers, donations may be made to Meals for the Elderly, 310 E Houston Harte, San Angelo, Texas 76903.