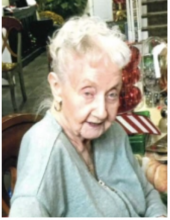 Betty was born to Floyd and Willie May Kelsey Pinkerton on December 29, 1926, in Norton, TX. She grew up in Littlefield, TX and graduated from Littlefield High School in 1944. Betty then entered Shannon School of Nursing on D-Day in 1944. While in training, she became known as Pinky. She graduated in May of 1947 and married Jack Lieber the following November at the Presbyterian Church with BO Wood officiating. Their son Frank (Rusty) was born in 1950 and daughter Beth Ann shortly after in 1953.

Betty worked as a nurse at Shannon Hospital where she loved pediatrics and the newborn nursery. She worked with many community organizations such as Head Start before it was associated with SAISD, Planned Parenthood, Sick Baby Clinic and Meals for the Elderly. She had been stricken with polio in 1948 but considered herself blessed having survived and only experiencing post-polio symptoms later in life. After Jack’s passing in 2010, she moved to St. Angelus Assisted Living. In 2021, she moved to her “casita” in the country where she enjoyed the deer, donkeys, and the sunsets.

Betty is preceded in death by her husband, Jack and son, Rusty.

She is survived by her daughter Beth Ann Buchholz and husband Don, of Coke County; her grandchildren, Col. Doug Buchholz and wife Kim of O’Fallon, IL, and Lt. Col Matt Buchholz and wife Stephanie of Beavercreek, OH; granddaughters, Stefanie Taylor of Sonora and Amber Jansa and husband Clay of Abilene. She was also the proudest great-grandmother to Madyson, Makenzie, Abigail, Jack, Dylan, Lane, Peyton, Daisy, Fletcher and Claire.

A private burial was held at Fairmount Cemetery in San Angelo per her request. The family would like to say “Job Well Done” to Kindred Hospice and Robert Lee Care Center.