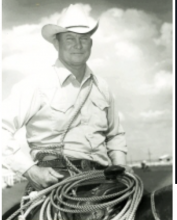 Lonnie Monroe Tumlinson, Veteran Pro Rodeo Cowboy, surrounded by loved ones, made his last ride to his Heavenly Father, May 17th, 2022.  Monroe was born, May 31st, 1928, to Lonnie Edward and Fannie Irene Tumlinson in, Uvalde, Texas.  As a small boy his dream was to be a Cowboy, and that is what he became in every sense of the word.  He grew up observing, learning, and honing his skills from working on several West Texas and New Mexico ranches, and from rodeo legends Vance Davis, Lester Davis, Toots Mansfield, Sonny Evans, and Dan Taylor, to become one of the top rodeo competitors in calf roping, bulldogging, steer roping and team roping. He trained some of the best rodeo horses that could be ridden over the years, as well as being a Ranch Manager. He was a member of the Turtle Rodeo Association in the 1940’s before it was renamed the Rodeo Cowboy Association in the 1950’s and is now known as the Professional Rodeo Cowboys Association.  His cowboy profession took him to rodeo events all around the United States. He married his Cowgirl, Maurine, at the young age of 21, January 9th, 1950, and together they shared the rodeo circuit experience, and later with their children Bertha and Edward.  In the first years of their marriage Maurine participated in many of the quadrille rodeo performances.

He not only was a competitor but worked as a pickup man for rodeo producers, Harry Knight, Everett Colburn, Beutler Brothers, Tommy Steiner, and others at major rodeos all across the United States.  Monroe was honored and inducted into the Texas Rodeo Cowboy Hall of Fame in 2010, and became an honoree in the Dublin Cowboy Heritage Museum, Dublin, Texas, in 2019.  He was a Ranch Manager, for the R. E. Odom, Ranch, in Cresson, Texas, for over 48 years, until retirement where he continued to reside.   During his years with Mr. Odom, he continued to rodeo, mainly participating in steer roping and team roping, as well as training horses.

The family would like to acknowledge their appreciation for the care given to Monroe by San Angelo Nursing and Rehab, and St. Gabriel’s Hospice and Palliative Care in San Angelo, Texas. May God bless their caring hands and their work for others. In memory of Monroe donations can be given to St. Gabriel’s Hospice of San Angelo, to Triple Cross Cowboy Church, or to one’s preferred charity.