According to officials, the newly designated I-14 route runs from Midland-Odessa through San Angelo across Central Texas then to Alexandria, Louisiana, Laurel, Mississippi, Montgomery, Alabama, and Columbus, Georgia before terminating at Augusta, Georgia.

I-14 will be built primarily by incrementally upgrading existing highways in each of the states. The first sections of the I-14 corridor in Texas were approved by Congress in 2015 and a 25-mile section of freeway from Killeen/Fort Hood to I-35 in Central Texas became I-14 in 2017.

The section of I-14 in West Texas will run from Midland east on SH-158 to Sterling City then on U.S. 87 through San Angelo to Brady, then on SH-190 from Brady to Killeen.

“We understand that building I-14 will require billions of dollars and many years to complete but we are on our way,” said John Thompson, chairman of the I-14 Gulf Coast Strategic Highway Coalition. “The I-14 system will improve connectivity between regions, provide freight movement efficiency, link important military facilities and strategic seaports, create a high elevation alternative for coastal sections of I-10 that are prone to flooding, and spur economic development opportunities along the 1,300-mile path."

The new bill expands the Texas designation to include San Angelo and Midland-Odessa. It will also include the four north-south future interstate spurs that will connect I-14 to Interstate 10 and serve the Port of Corpus Christi, the Port of Houston, and the ports at Beaumont and Port Arthur.

I-14 will also add a north-south spur connection to the Port of Gulfport, Mississippi. Additionally, the designation includes a future interstate loop at Bryan-College Station designated Interstate 214.

One of the most significant benefits of providing interstate linkage between a dozen military facilities served by the I-14 corridor is that these connections will add to the military value of each of the installations.

Texas lawmakers both at the local and national levels have been instrumental in securing the legislation that made I-14 a reality for the state.

Tom Green County Judge Steve Floyd serves as the Coalition Secretary-Treasurer and Congressman Brian Babin of Woodville has been sponsoring the bill since he began serving in 2015.

Earlier this year, it was included in a House transportation bill and became the basis of an amendment to the bipartisan infrastructure bill offered by Senator Ted Cruz of Texas and Senator Raphael Warnock of Georgia.

The I-14 designation had the support of all 10 senators and every member of the House along the corridor.

In West Texas, the I-14 corridor follows SH 158 and US 87 from Midland to San Angelo and Brady then runs east on US 190 to tie into the existing section of I-14 at Killeen.

The corridor then runs east to Bryan/College Station and Huntsville before generally following US 190 through East Texas, crossing the Sabine River on LA 8 near Fort Polk at Leesville, Louisiana. 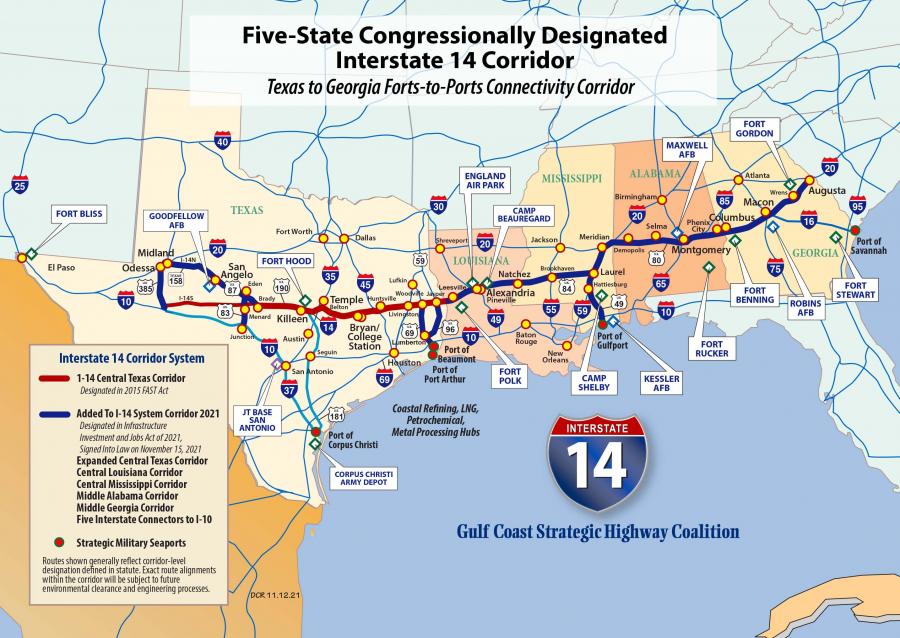 Another job well done by Biden. See democrats will help those in other parties and states that didn't vote for him while republicans will try to harm people they don't like and blue states in anyway they can. Remember this when you vote next.

Also, this is what Abbott calls "Biden's failing agenda" I guess he thinks helping Texas improve it's infrastructure is "failing", very telling that Abbott would call helping his own state "failing" if he thinks it might hurt Democrats. Vote Abbott OUT.

There you go worshiping Biden again, when he really only signed his name. You're so easy to call out it's not even funny.

Not worshipping, like you people compare trump to jesus. Just pointing out FACTS, contrary to republicans propaganda.

Also, I know he signed his name, it's the last thing necessary to make it law. Notice I said "democrats" when explaining that they will help everybody as opposed to republicans who try to hurt Americans they don't like.

You're not laughing, if you are it's at your president, and his horrible sidekick Kamala, who btw is now the worst VP in history, followed by her forgetful leader Sleepy Joe Biden. HAHAHA your party is a huge FAILURE, you can tell when you reach for some link nobody here supported!!!

As first purposed I-14 was supposed to run Lubbock through San Angelo.

No representation for San Angelo is what happened.

I have lived in 3 cities in Texas that have interstates and they were and still are shitholes.

If it really even happens it will not be completed until close to 2040 and since Angelo is only 150 miles from the border, Angelo will become a major interstate for drug/human trafficking.

We think crime in Angelo is bad now it will be 100 fold then.

Careful what ya wish for.

I don't mean to be brash but, I also come from a huge city with several interstates and it wasn't a shithole. That being said San Angelo is already a shithole so why not follow suit with an interstate?