WALL, TX – The small community of Wall was on national television this week after ESPN aired a video of a pole vaulter.

The video was first posted by the man in the video Garrett Stephens, a local track athlete, who is now on the Angelo State's Track Team.

Stephens confirmed that the video happened two years ago but that it is just now becoming viral.

"I posted it on Tik Tok and it got 13 million views," said Stephens. "Then all kinds of people including ESPN started texting me asking if they can post it."

The video was featured on ESPN and the SportsCenter social media pages. The video alone on Instagram has been viewed more that 2.2 million times. 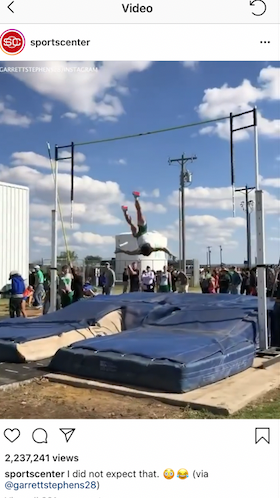 "After my career i decided to stay here and run track in my hometown," said Stephans. "but ya it's been crazy."

Good gravies, what a herd of