SAN ANGELO, TX — Irving Street in San Angelo starts in the barrio at Avenue U on the south side of the city and runs north, terminating at City Hall. Some say the 2.1 miles of asphalt should be renamed to honor San Angelo’s Hispanic heritage. In light of this, there is a movement afoot to rename Irving to Cesar Chavez Street.

“Irving Street was selected because it begins in the heart of the barrio and ends at the steps of City Hall,” states an announcement for a community meeting on the subject leaked to San Angelo LIVE! from an email sent out to members of the San Angelo Hispanic Heritage Museum organizing committee.

According to “Historic Resources Survey of Downtown San Angelo,” a City of San Angelo-commissioned study of the area in August 2021, Irving bisects a major part of the city’s historical Mexican-American neighborhood. The study notes that Mexican-American families moved south of the river, to lots around and south of the Kansas City, Mexico and Orient Railway tracks near the turn of the last century.

“By the 1910 census, Mexican Americans comprised 7 percent of San Angelo’s population; of this community, 45 percent lived in the Miles Additions, while another 33 percent lived south of the river,” the study states.

The origins of Irving Street’s name trace back to the founding of the city of San Angelo by land developer and speculator Bart DeWitt. After the flood of 1869 wiped out his saloon and general store near the stagecoach stop at Ben Ficklin, widower DeWitt was able to purchase 320 acres north and across the Concho River from Fort Chadbourne for $1 an acre from Granville Sherwood.

With dreams of building a new city, DeWitt laid out the plat in 1870 of what is today downtown San Angelo. The naming convention of many of the streets followed the sentiments at the time. Tom Green County was part of the post-Civil War Reconstruction South and revering Confederate Civil War heroes was common back then. San Angelo historian Gus Clemens, in his 1985 book The Concho Country, recounts how DeWitt named the following San Angelo streets : 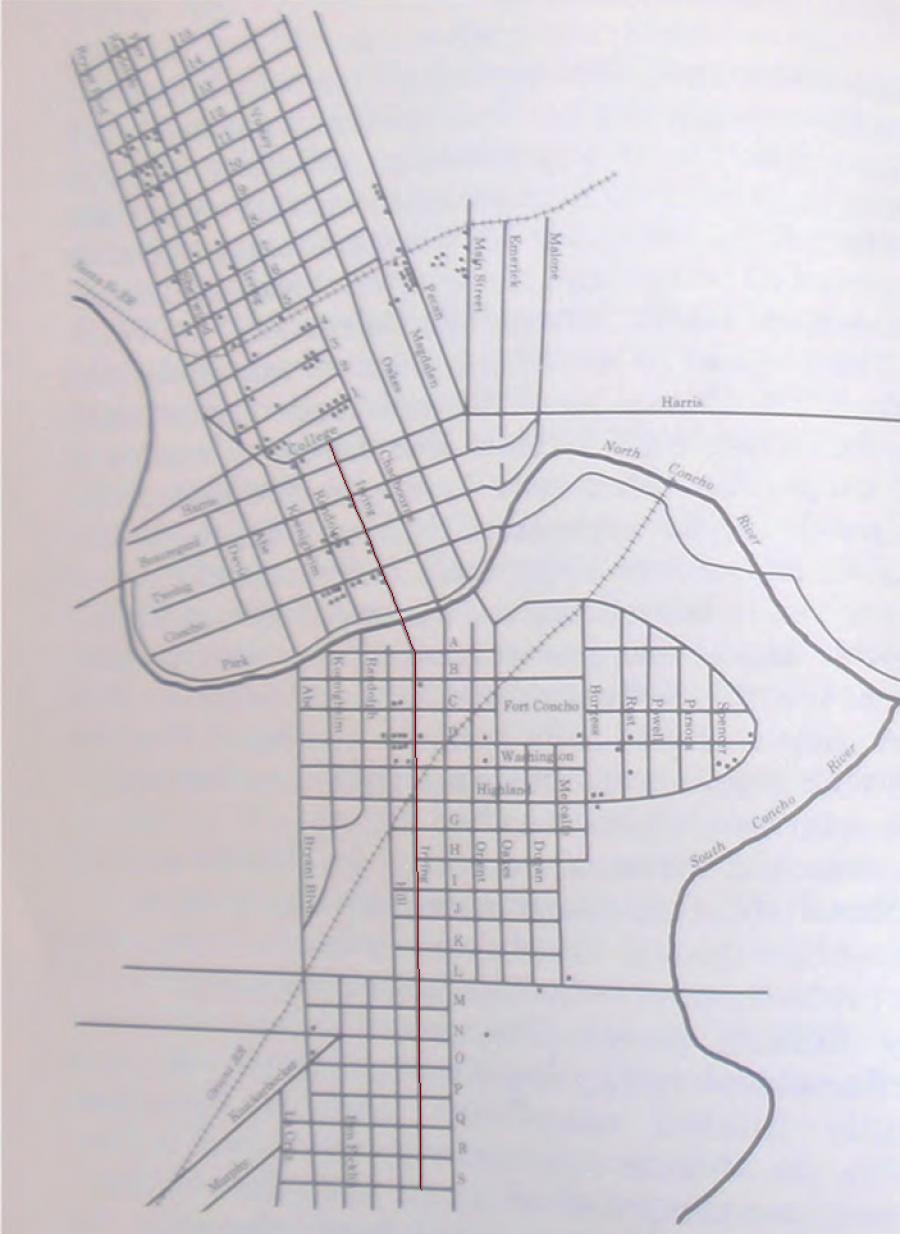 The name “Irving” does not have historic ties to San Angelo other than it was named by DeWitt, the founding father of the city.

Cesar Chavez has no history with San Angelo, either. Chavez was a community organizer in California most of his life. Chavez founded the National Farm Workers Association in the San Joaquin Valley. He organized primarily Mexican-American farm workers to obtain better pay for their arduous manual labor at the central California farms. He was an organizer of the Delano Grape Strike from 1965 until 1966. Chavez is also described as a far left activist in history.

Controversy followed Chavez. In 1967, he was accused of purging his union to remove those disloyal to him. Chavez was also a vocal opponent of illegal immigration from Mexico. He believed illegal migrants were driving down the wages of workers in his union. He was criticized for calling them “illegals.”

The Hispanic Heritage Museum group also noted that, “We would like to pay tribute and see a representation to the Hispanic Community. Cesar Chavez is recognized nationally for his leadership.”

The entire Irving Street runs through San Angelo City Councilman Harry Thomas’ Single Member District 2. He said he will attend the meeting to get feedback on the proposed name change. He said he is not openly committed as he believes there may be backlash from residents and businesses who do not desire an address change. But, he noted that Irving bisects a predominantly Hispanic neighborhood and he was not opposed to renaming the street, either. Thomas also wondered aloud if there were Mexican-American San Angelo citizens, past or present, whose name would be a better choice for the renamed Irving Street.

“Although I understand that the committee is looking at renaming some cross streets (to Irving) or new streets after local Hispanic heroes,” Thomas said.

A public meeting about the renaming of Irving Street to Cesar Chavez Street will be held at the San Angelo Railway Museum (the former Kansas City, Mexico and Orient Railway Depot) at 703. S. Chadbourne St. at 6 p.m. on July 12.

A communist honored by another communist.
Which means the idiots on the city council will definitely change the name.

Can we change the name Koeingheim Blvd to Putin Blvd?

A local Mexican American would be better served to name the street after.

Local names for Irving St. Dr Arnoldo Deleon Dr. I am sure there is plenty of local Hispanic that could be named after. And I am sure if we dig deep enough we can find something wrong with everyone.

Ugghhhhhh, shut up. Dear god, y'all are unbearable.

Get a hobby. Go outside.

The amount of time I see wasted here on party politics is pathetic, on both sides. Imagine if that effort was put into something useful, like a park cleanup or fundraising. No, y'all would rather go at each others throats over trivial sh*t.

So glad I moved. Enjoy living in the shadow of any kind of progress or common ground.

Why not Modelo Lane or Tecate Avenue? Either would be better than naming it after a communist. Better yet, how about y'all just leave stuff alone and concentrate of fixing the dang roads and water lines.

How about the Fuentes family?  Several generations of successful restaurateurs who have provided local jobs and contributed to the restoration of downtown San Angelo.  Fuentes Ave.

I have no problem naming a street after Cesar Chavez or many other local or state heroes of Hispanic descent.  Chavez was a hero to many Hispanic people.

I've been studying the city map and Irving is a long street and would affect many residences and businesses by having to change their addresses. I suggest the change be made to Avenue Q between Bryant and Chadbourne in the heart of the barrio. These are two very busy streets with lots of exposure and relatively few residences and businesses to cause such a drastic inconvenience.

Heroes were not born heroes, they became heroes later in life, after struggles and mistakes. Everyone has a past. Hispanic Drive is what you want. There, represented!

Mr. Irving was honored by the city of San Angelo for his contribution to this town.  We need to honor Texans and especially people who have done great things for San Angelo.  We don't have the right to dishonor those memories by removing this name.  That's offensive to the citizens of the town and to Mr. Irving!  It's as racists and offensive as changing the name of Robert E. Lee Jr. High!