Don't Let The Rain Fool You, San Angelo Still Has a Water Shortage

“I think we don’t need to be afraid to put anything on the table and I think we need to push it,” said Mike Boyd, San Angelo's president of First Financial Bank and the newly appointed chairman of the Water Advisory Board. “All of our time is valuable and we have a vested interest in what we do for this and so I just want y'all to know we are going to take things serious and we are going to push things forward based off of y'alls’ recommendations and how we are going to decide to do it, we are not going to take it lightly,” Boyd said referring to city employees and Bill Riley, City of San Angelo Water Utilities Director.

Bill Riley, being the City of San Angelo Water Utilities Director and most informed and seasoned in the expertise of the city's water situation, walked new board members and those in attendance through a brief history of the Hickory Aquifer project.

“The city purchased the water rights in a well field or property about 60 miles from San Angelo back in the early 1970s, which was done with a lot of forethought and has proven to be very valuable to the city,” Riley explained, as he displayed a map of the well field San Angelo purchased.

The map shows 52 sections of 35,000 acres of land where nine wells were drilled when the project began and six additional wells have been drilled and are being completed at the present moment, making the well count 15 upon completion of the $120 million dollar project.

“Four of the wells are complete and being connected. One of them is producing water now and the final well is scheduled to be completed sometime in June,” Riley said. “The pump station is almost complete, part of it is in operation and this is the well field pump station that will pump the water from there into the city of San Angelo,” he pointed to a photo in a Powerpoint slide.

Riley then explained the process that the water from the Hickory Aquifer, contaminated with iron and radium, will undergo after traveling 62 miles through a 30-inch pipeline to the water treatment plant in San Angelo.

“The groundwater from the Hickory Aquifer has iron and radium in it that has to be removed. So part of that process is that when the water enters the facility, air is injected into the water where it oxidizes the iron, then that water goes through this oxidation vessel,” he said as he showed a slide with a picture of oxidation vessels resembling four gigantic piggy banks minus the pig ears. “These (vessels) provide detention time for the iron to oxidize and then it goes into pressure filters where there’s an anthracite (coal) material that removes the iron from the water. It leaves that and it goes into these WRT vessels”, which just look like blue mini water towers and house the radium removal part of the process. “It’s an ion exchange process that has a resin material in it that as the water that goes through these ‘trains'. There’s three other vessels that each one of the ‘trains’ and the water goes through that material, as it comes out the other side, the radium has been reduced.”

All of this takes place inside a red brick building located beside the city water plant. This brought up a couple of questions.

1. At this time is San Angelo reliant on the aquifer water?

“Right now we are not reliant on the Hickory Aquifer, all of the water being pumped from those wells at this time is being banked,” Riley said. "Banked" means that the water is being stored as a sort of backup resource for the city to utilize if necessary. “The plant is online and we are using it. [But] as long as we have available surface water, we anticipate using the Hickory at about a million gallons a day and that’s only because it has to operate,” he said. “The WRT vessels need to stay wet and so the plant has to operate continuously with the minimum amount being about a million gallons a day.”

2. How many years or months away are we from totally having to rely on the Hickory Aquifer as a sole source of water?

“It depends on how much rain we have. According to the Colorado River Municipal Water District, who manages Ivie, Spence and Thomas Systems, if there is no significant inflow to Lake Ivie, then probably March or April of next year it won’t be available,” RIley said. This would leave San Angelo no choice but to dip into the banked iron and radium contaminated water of the Hickory Aquifer.

3. How much water can the city bank?

In the mid-1990s the city of Brady sued the City of San Angelo and the Groundwater Conservation District for exactly how much water the city is able to produce from the aquifer.

“There was a court order, or settlement if you will, that specified exactly how much water can be produced each year from the aquifer,” Riley said. “That started in ’96 and we were allowed 1,500 acre-feet per year with a maximum annual production of 10,000 feet. None of the water being produced has been used since the beginning of production, so that leaves San Angelo with, according to Riley, “...about 39,000 or 40,000 acre-feet of water that has been banked. The amount that we can remove annually changes periodically and currently we can produce 2,750 acre-feet a year with a maximum of 15,000 acre-feet.” 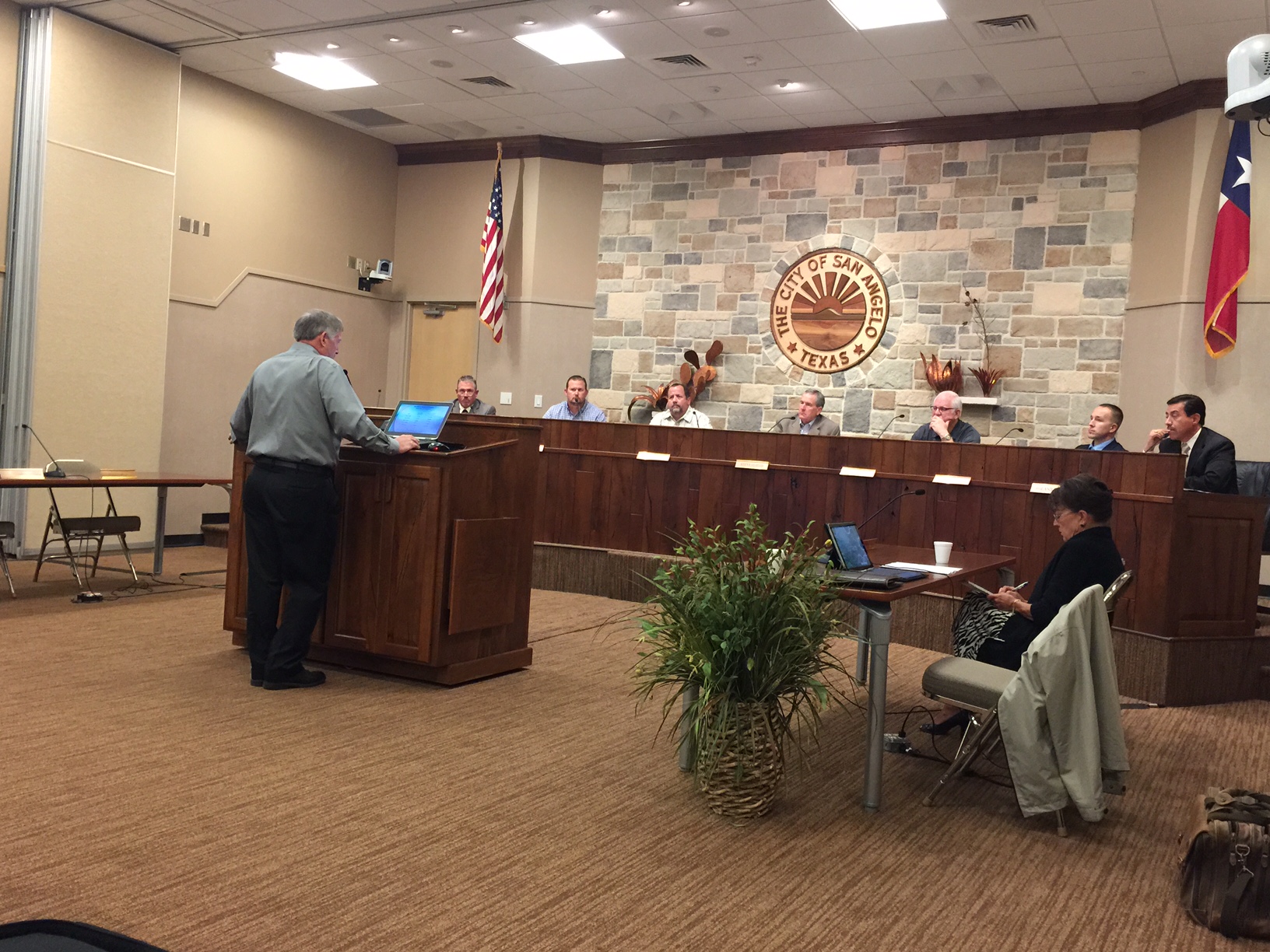 Above: The City of San Angelo Water Advisory Board meets on May 13, 2015. (LIVE! Photo/Amanda Henson)

By 2023, the allocation will be 10,000 acre-feet and the maximum will decrease to 12,000 acre-feet, however, according to Riley, after 2026 San Angelo will not be allowed to bank anymore aquifer water.

Water consumption has been an issue for the city in the last few years. A drought and the lack of precipitation caused San Angelo to tighten water restrictions, and preach the word of water conservation to her residents. In response, citizens stopped watering lawns and a few residents switched to xeriscape lawns, bought rainwater collection barrels to keep their trees alive and lived with low water pressures and outages.  San Angeloans have even put up with the noxious smell of chlorine pouring from shower heads and faucets during the times of treatment from the city’s normal water source, O.H. Ivie. Lake Spence, which is also supposed to supply the city water supply, is virtually dry right now, and hasn’t captured any significant gain in the last couple of years, taking Spence out of the equation.

As Riley said, if there is not a significant amount of rainfall to replenish Lake Ivie, San Angelo could be tapping into the banked Hickory Aquifer source before 2026. But the Hickory Aquifer project is not yet completed and won’t be until next fall. So where would we get water from directly if we needed it tomorrow? The topic of reclaimed water surfaced as an answer.

“The city embarked on a reuse study approximately a year ago to look at taking the water from the waste water stream and putting that through an ultra-filtration and RO process and then returning that [to the public water supply]. That study has been completed,” Riley informed the board. “I would like to bring that information along with the presentation from the consultants to you at a future meeting. It is not cheap, but it is one of our options that’s available that we know is water that we can recapture and utilize.”

After further discussion it was decided that the infamous topic of reclaimed water will take place on June 3 at 9 a.m. inside the city council chambers at the McNease Convention Center. It is a public meeting for anyone interested in city water use to attend.

See the Water Advisory Board's past and future agendas here.