In addition, 79% of those surveyed believed the state of the economy was “poor.” The survey also tells us of those who believe the economy is poor, 90% of Republicans and 67% of Democrats share that sentiment. Of all respondents, just 28% of U.S. adults approved of the job Biden is doing with the economy. More on the poll at the AP.

These dismal poll numbers became a topic for discussion during a news conference during the 2022 NATO Summit in Madrid, Spain today.

Reporter Darlene Superville asked Biden about those poll numbers during the press conference:

“‘America is back’ was your motto at the first NATO summit last year. And you’ve come to this summit here and one in Germany after the U.S. Supreme Court overturned constitutional protections for abortion, after the shootings in Buffalo and Texas, at a time of record inflation, and as new polling this week shows that that 85 percent of the U.S. public, thinks the country’s going in the wrong direction. How do you explain this to those people who feel the country’s going in the wrong direction, including some of the leaders you’ve been meeting with this week who think that, when you put all of this together, it amounts to an America that it’s going backward?”

Biden responded, "“They do not think that. You haven’t found one person, one world leader to say America is going backward. America is better positioned to lead the world than we ever have been. We have the strongest economy in the world. Our inflation rates are lower than other nations in the world. The one thing that has been destabilizing is the outrageous behavior of the Supreme Court United States and overruling not only Roe v. Wade, but essentially challenging the right to privacy. We’ve been a leader in the world in terms of personal rights and privacy rights. And it is a mistake, in my view, from Supreme Court to do what did. But I have not seen anyone come up to me do anything other than — nor have you heard them say anything other than thank you for America’s leadership. You’ve changed the dynamic of NATO and the G-7. So I — I can understand why the American people are frustrated because of what the Supreme Court did. I can understand why the American people are frustrated because of inflation. But inflation is higher in almost every other country. Prices at the pump are higher in almost every other country. We’re better positioned to deal with this than anyone, but we have a way to go. And the Supreme Court — we have to change that decision by codifying Roe v. Wade.”

We’re doing great because it’s worse somewhere else, and we have the most diverse administration in history. Come on man. The buck stops with Putin.

Inept and incompetent borderline vegetable. And those are his best qualities I’m trying to be nice ;)

Ol china joe is completely disconnected with the reality of truth.

He is an evil brain dead drone.

Tell us again Bobo just how good things are.......... if you can manage to put a sentence together. 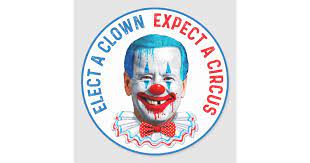 Folks, looks like the recession is here and only will get worse.

We had a recession under trump.

The only ones left in the democratic party are the affluent snobs, hardcore leftist and the low information voters.

Haha you Biden sycophants are pretty quiet what’s up?

It is all for saving the liberal world order, democrats hang your head in shame.

If Biden did indeed say that most Muricans believe that Murica is not headed in the wrong direction, and inflation is low, dementia really sucks.