Philadelphia – President Biden assailed former President Trump and all his supporters as a threat to democracy during a rare primetime political speech meant to shift the focus of the midterm elections from issues facing the nation to political rhetoric.

"Donald Trump and the MAGA Republicans represent an extremism that threatens the very foundations of our republic." Biden said. "They promote authoritarian leaders," he went on. "They fanned the flames of political violence."

"MAGA forces are determined to take this country backwards. Backwards to an America where there is no right to choose, no right to privacy. No right to contraception, no right to marry who you love," he said in a direct attack on the U.S. Supreme Court and Republican led states.

Biden said of Trump's supporters, "They live not in the light of truth but in the shadow of lies."

"We must be honest with each other and with ourselves: Too much of what's happening in our country today is not normal," Biden said. "Donald Trump and the MAGA Republicans represent an extremism that threatens the very foundations of our republic."

He said the Republican Party of 2022 was partly "dominated, driven and intimidated" by Trump and his acolytes.

"The MAGA Republicans don't just threaten our personal rights and economic security, they're a threat to our very democracy," he said last week at a Democratic political rally in Maryland. "They refuse to accept the will of the people. They embrace political violence. They don't believe in democracy."

Prior to the address, Fox News reported, "Republicans see the ramped-up rhetoric as further evidence that the White House is not representing most Americans. Minority Leader Kevin McCarthy told FOX Thursday: "The problem with Joe Biden is he does not understand the soul of America."

When the descendants of Inuit tribesman finally move down into the North American mainland several thousand years from now, whatever researchers are able to look past the superstitious legends warning against the curse of the old world is going to be absolutely fascinated by the slightly irradiated relics we leave behind.

You couldn't pour water out of a boot with the directions written on the heel, cretin.

Aww. You learn new words from me! You're my little baby monster! ♥️

It is kind of an incely word, innit?  Like when you see an Anonymous person on the internet use it, you wonder when was the last time that person took a shower or ate vegetables.

So you like to hump individuals who don't use big words... No judgement.

The reason I didn't want to sleep with you was more about your entire personality, not necessarily your vocabulary choices.  Not sure this is the forum for this conversation, Rita.

"The reason I didn't want to sleep with you"

WTF are we talking about again? Look, for the record, or my file,or whatever information has been compiled about me, if you can't pronounce avocado or Colorado or you think the word affidavit is pronounced "alfadavid," I am perfectly alright with that. But whatever needs you have or do not have met are not germain to this particular discussion, random internet person.

XIDEN IS THE THE ONE THAT HAS NO SOUL.

HE SOLD IT TO THE DEVIL A LONG TIME AGO.

Legend has it that there is a part of hell where souls fry until they pop like popcorn kernels... 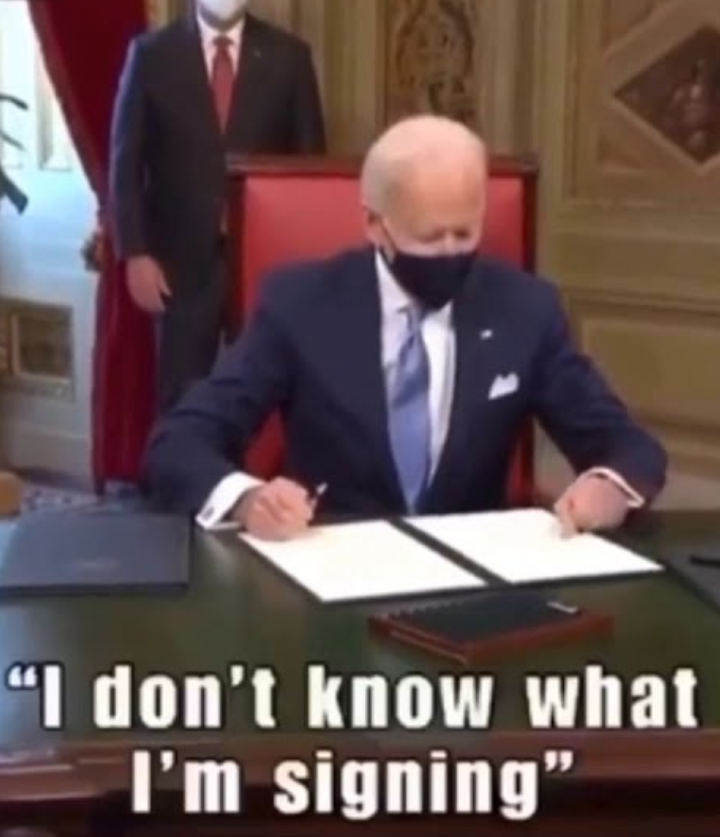 Myth and legend are 90% of the Q/MAGA ethos, no?  Still waiting on that gathering storm from a few years ago.

Scratch that. Wait on the coke from primo on the other side and don't get in his way or you'll end up in the dumpster. Rumor has it he sells to Hunter.

Can you imagine how crazy it would be if Hunter was appointed a job within the administration, like Senior advisor to the President. That would be wacky.

I wanted Kamala Harris to be president so she could start WWIII on her cycle and any survivors could just rebuild the country from scratch.

Most divisive President in our entire history.

When one considers the fact that Trump foisted The Big Lie on the country and fomented revolution on January 6, this statement appears profoundly ludicrous.

Democrats game plan is to scare the blacks and other clueless followers.

"scare the blacks and other clueless followers"  lol can you explain how this comment isn't racist?  Blacks are clueless?!?

Funny how "black lives matter" but the lives of sterilized minorities in China making sneakers in concentration camps don't.

Nor the indigent children separated from their families at the border and harvested in the basement of a Pizza Hut for their adrenochrome which keeps the democrat cabal alive.

Actual genocide is happening in China.

Myopic mainstream black culture in the US doesn't see itself in the context of the global community. It doesn't acknowledge its own culpability in its perpetuation of the harmful aspects of US foreign policy through the lifestyles and values it promotes.

It snubs the likes of its proven intellectuals like John McWhorter to raise up Ibram X Kendi, who himself is just a tool for self serving interests looking to prey on the black community and use them as political pawns.

Can you elaborate on the connection between mainstream black culture lifestyle and values and their impact on US foreign policy?

I literally don't have time to write that book.

Too bad.  There's no way that could sound white supremacisty at all. lol

Perfectly staged…dark and ominous just like our future with the democrats in charge ;)

I think many are actually hopeful about balkanization. It's the interim that tends to be harsh. The last civil war lasted about 4 years. WWII lasted about 6. Times like that can be horrifically trying.

The only ones talking about the potential for war are the cosplayers and larpers that have never been to war.

Individuals planning to act tend to be more "grey man" about their business. Goodfellow does cybersecurity, so no doubt they spend a lot of time monitoring threats that don't exist just like Brandon spends a lot of time talking about them.

It's also a fun fact that lots of people in the military don't literally go out to fight in battle even during war. I think they've even started awarding "avoided deployment" badges. Might just be a rumor.

Like the antifa boogeyman. And your insider knowledge of the military and Goodfellow is amazing.

What some apparently fail to understand is that balkanization doesn't necessarily play out as a "Red Dawn" (1984 movie) style rebellion. From the North Carolina travel ban in 2016 to the way that California and Texas have each flouted the authority of US presidents opposed to their political ideologies, the process has already begun, and it seems to only be gaining more momentum...

Hillary once referred to her political opponents as “a basket of deplorables” remind me again how that worked out for her lol.

Gotta hand it to these Biden sycophants most rats jump from a sinking ship ;)

Ever eaten crow? My understanding is it’s not very appetizing ;)

The Democrats have won. The secret ingredient is crime. What follows is going to look more and more like Latin American style corruption and political dysfunction as time passes.

After all, winning is winning.

Trump, by his own words, should go to prison.  It is clear that the stupid bastard grossly mishandled classified documents and further moved many other documents to Piss-A-Puddle when he had no right to do so.

Obvious TDS get some help ;)

Isn't that the same thing that they were crying "lock her up" over Hillary Clinton?