When Biden signs the bill into law, it will be the largest transfer of wealth in the history of the United States and a huge lurch to the left toward the Socialist country Democrats are actively fighting for.

Here is Congressman Pfluger's take on the IRA and why he voted against it.

Earlier today, I voted against the called “Inflation Reduction Act,” a piece of legislation that weakens American businesses, increases the costs of energy for families, hikes taxes, and funds a new, 87,000-person strong IRS army to audit low-and-middle-income families.

Here’s a pretty good rule of thumb for this legislation: If you are one of Biden’s chosen green special interest groups – then you get a handout paid for by American taxpayers.

But for small, independent American Energy Producers in the Permian Basin…your reward for keeping the lights on is a new, poorly conceived “natural gas tax” that will raise the costs of everything and give China an edge on our American manufacturers. I offered an amendment to strike this provision. Democrats voted it down in the Rules Committee – voting against U.S. energy and for foreign energy.

If the Democrats' goal is to reduce baseload reliable power sources and increase our dependency on foreign nations, they are successful with this bill. If their goal is to create regulatory red tape to drive up energy costs for Main street businesses and families, they are also successful.

If their goal is to help American families and small businesses, they have absolutely failed.

My Republican colleagues and I will not fail you. We remain committed to always advocating for your rights. I will always put America first. This is why I confidently voted AGAINST the Inflation Reduction Act in the house today.

Is that a surprise considering who he is beholding to.  Wouldn't it be nice to have a congressman  that represented the people  of our district rather than the oil industry.

Duly elected by “the people of our district” obviously not your kind of people lol.

That would be Joe Biden. You know the racist demented crook “your kind of people” voted into office ;)

It’s the most diverse administration in history. God you’re ignorant.

You’re right they definitely check all the boxes…of course the level of competency is severely lacking. Was talking about Biden I can provide you direct quotes if you like ;)

If you are tough enough and smart enough you will get to grow old too but, I have doubts about you having those qualifications.

Good to hear someone has the common sense to know a sham scam of our tax dollars.

Hopefully others that have any common sense will follow suit.

Only thing this money is going help are these evil DC libturds future families bank accounts and other evil kingpins like Soros.

Working class will continue to suffer.

Do you have any proof supporting your ignorant rhetoric?

Apparently you have swallowed too much of the koolaid.

That’s not proof at all lol, do you work for trump’s legal team?

That’s because you typically think with the wrong head lol. Anyway you might should go get that checked out…if anything get your boyfriend to take a look ;)

Lol a gay comment wow. You’re giving away your age

For you it’s your maturity level always talking about your penis ;)

Maybe one day I’ll get older and think calling someone gay is funny. What exactly do you think is negative/funny about being gay? That’s one step removed from thinking there is something negative/funny about someone’s race. It makes zero difference, like “you’re probably one of those guys whose earlobes connect to your head instead of dangling free, lol” is not a gotcha just like calling someone gay, black, Muslim, etc is not a gotcha.

Haha me thinks thou dost protest too much ;)

You’re probable one of those guys whose ring finger is longer than your pointer finger. Got’em

Haha my middle finger is the longest ;)

Inflation and and slow growth will be with as long as the democrats are in power.  Hidden tax increases in this package.

Small business, the middle class, blacks and other minorities will effects of this unwise bill.

An American version of socialism is here.

More like been here and growing for the past century…. It’s what modern “conservatives” are conserving

Not true “ conservatives” Republicans. I’ll be the first to say that McConnell needs to go ;)

Would be a start

The American Dream is dead!

No, that’s when the left lost their minds and decided it was better to drive the country into chaos than take the L 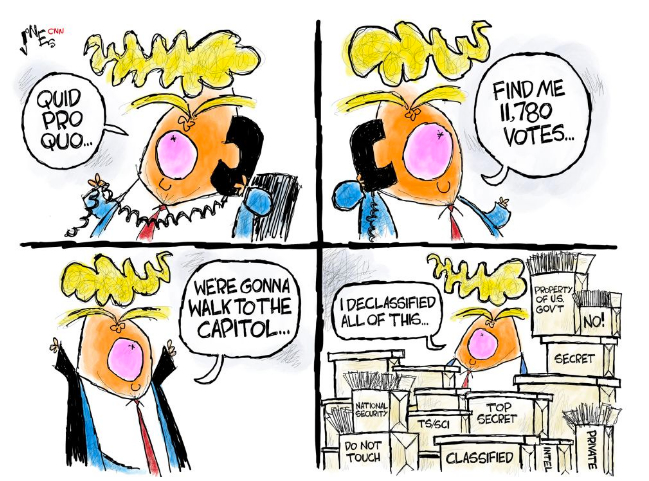 The controversy over the handling of  “classified documents” dates back to the beginning of our country…the most egregious example being the deletion of some 33,000 e-mails from Hillary Clinton’s private server ;)