Around 9 a.m. a flight from the West Houston Airport coming into Kerrville crashed. According to Newswest 9, all of the six occupants inside of the airplane have died.

The National Transportation Safety Board has been called in to investigate the crash.

The plane was a small twin engine Beech Baron (BE58).

Winds at the Kerrville Airport favored runway 12 Monday afternoon. Kerrville has two runway surfaces and the 12-30 runway is the longest.

According to FlightAware.com, a website that tracks aircraft through the FAA’s Air Traffic Control system, a Twin Beech Baron departed West Houston Airport at 7:30 a.m. headed for Kerrville. The flight took the plane northwest of the field where the pilot performed a teardrop entry into a holding maneuver at the Initial Approach Fix (IAF) called OBUCO on the approach plate that positioned the plane on final to runway 12. The only approach available for runway 12 was an RNAV (GPS) approach.

The FlightAware.com flight path:
Above: FlightAware track for BE58 from West Houston to Kerrville, likely the mishap aircraft.

The flight tracking of the plane on FlightAware.com eerily ends just as the Baron went slightly right of the course inbound, at approximately 6 miles from the airport. FlightAware.com does not indicate the plane arrived at its intended destination. The stall speed for a Baron with gear and flaps down is approximately 75 knots (indicated airspeed, or KIAS). Clean configuration stall speed, with gear and flaps up, is 85 KIAS. Approach speed is usually 100 KIAS. FlightAware.com showed the aircraft with a ground speed of 75 mph or about 66 KIAS right before impact. Accounting for a 15-20 knot headwind at altitude, the aircraft was likely above stall speed of 75 KIAS and below the clean stall speed of 85 KIAS. This all assumes both engines were operating.

The weather this morning was cloudy with strong 17 knot winds out of the SSE, according to Weather Underground’s history.

According to KXAN in Austin, DPS released the names of the deceased. The list contains all Houston residents: Stuart Roben Kensinger, 55; Angela Webb, Kensinger, 54; Mark Damien Scioneaux, 58; Scott Reagan Miller, 55; and Marc Tellepson, 45. The pilot was Jeffrey Carl Weiss, 65, also of Houston. Weiss is listed as the co-owner of the 1999 Beech Baron, registered with the FAA as N501CE.

Above: A photo of the mishap aircraft, Beech Baron N501CE, taken at Houston George Bush Intercontinental airport on March 30, 2017 by Brad Tisdel (used with permission)

Trooper Moreno said the plane crashed on private property on a ranch in an open, though rocky and hilly area. The NTSB accident investigation team is on site and takes over the identification of the victims and will determine the cause of the crash.

The aircraft is officially known as a Raytheon Baron 58, though most call this model airplane after its historical manufacturer, Beechcraft, or Beech Baron.

A 9-year-old photo of the likely mishap aircraft (flightaware) 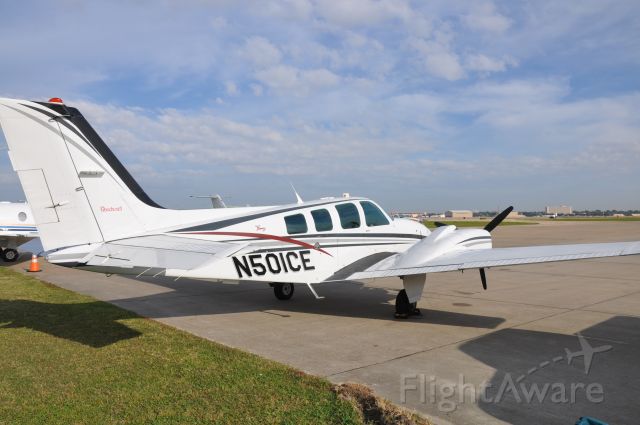 According to the graph on FlightAware that reflects altitude and groundspeed, the last recorded data showed 2000 feet and 76 knot groundspeed. If he had a headwind of 17 knots (as reported at the surface) his indicated airspeed would be around 93 knots. Depending on his flap/gear configuration, his stall speed would not be much lower than that. Just guessing, but I think he stalled the airplane too low to recover.

Floyd is no Hero

in WATCH: Man Wielding a Chainsaw Scares Off Protesters

Uhh what action could be

in WATCH: Man Wielding a Chainsaw Scares Off Protesters