Another crash happened at what is becoming San Angelo’s most notorious left turn lanes at approximately 5 p.m. Tuesday.

The Dodge Caliber was facing north on Bryant, and initiated a turn onto 7th, the Houston Harte Expressway’s access road. The white GMC pickup was southbound on Bryant in the outside lane.

The truck and Caliber collided, pushing the Caliber into a utility pole. (See pics)

Police arrived and no witnesses were available to tell the investigators if the Caliber had a green arrow at the light, or not. Police said there were three vehicles and drivers who stopped to render aid, but “no one stayed to talk to me,” the officer said.

With no witnesses, police cannot determine the exact cause of the crash and no citations were issued. 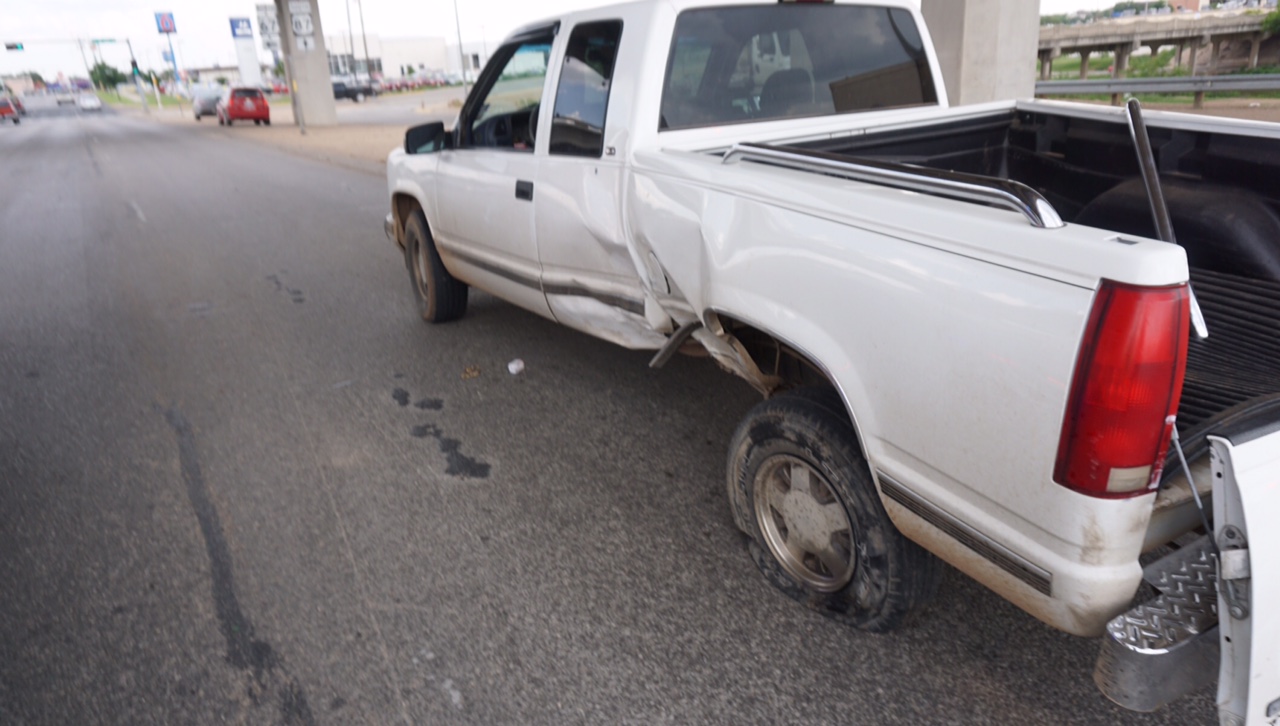 This was the same intersection where Aaron Allen in his Honda Civic was hit by a left-turning Dodge 2500 and killed on Dec. 7. Last week, a motorcyclist was injured turning left here.

One block east, at Chadbourne and 7th Streets, is a less busy roadway during rush hour and a possible alternate route to avoid doom at Bryant and 7th.

Nothing seems to be "in the works" to rectify this problem. Ho hum....And the injuries & deaths will continue....

I sent this letter to the Director of TXDOT and all representatives and the Standard Times. I'd like someone to fix this before another person gets killed.

"I note that hardly a week goes by without the local television news or the newspaper reporting some horrendous crash at a local intersection involving a vehicle attempting a left turn into oncoming traffic. Surely TXDOT has statistics on the number of this type of crash statewide. Having been lucky enough to narrowly avoid such a crash myself I feel I must point out what I think is a deficiency in TXDOT’s strategy in traffic lighting. So please consider the following points.
Signage – “LEFT TURN YIELD ON GREEN” followed by a green dot. This is one of the most logically warped sentences I have ever seen. If a driver skips a single word while reading it, it becomes an authorization turn left on a green light. If it is confusing to English speakers, I can only imagine how confused drivers that have only learned English a second language must feel when encountering that sign. Might I suggest the simpler and more logical “LEFT TURN PROTECTED ON ARROW ONLY”. This sentence is less prone to misinterpretation. It is used in New Mexico and probably other states.
On the subject of the light : Why is the left turn lane given a green light after the arrow goes out. Wouldn’t a yellow light be more appropriate? Green arrow = protected followed by Yellow light (solid or blinking) means caution, followed by Red light means stop. But this too could lead to some confusion from drivers accustomed to seeing a green light after the arrow goes off. But at least they wouldn’t barge into oncoming traffic without seeing it as a caution before proceeding.
However, I believe that either or both of these changes would be half measures. I am not content with half measures and the technology exists to make the entire system completely intuitive without any signage at all. All arrow lights could be changed to be multicolored. The technology exists, and is in use in Oregon. A green arrow is a protected left turn, a yellow arrow is a yield to oncoming traffic left turn and a red arrow is no turn allowed. No one could be confused by such an obvious display and it is all presented in the same light bulb. I assume it is some type of LED that can display more than one color. I do know that when I first encountered it I had no problem understanding what I was expected to do.
Meanwhile, back in Texas my insurance rates are climbing, vehicles are being destroyed and the injured and dying are choking the intersections that TXDOT is responsible for making safe."

You sent it where?

I'm not sure why you sent it to SAST. TxDOT reads San Angelo LIVE! first. (-;

I am not surprised by all the bad accidents in this city. I am originally from the LA area and have never seen so many pointless crashes. Someone should start a study to find the root problem.

I make that turn right there

I make that turn right there half a dozen times a day, 5 days per week and never have had a wreck there.... I know it's hard for most San Angelo drivers to multi task by working the pedals and looking out of the windshield at the same time, but really.... that's all it takes... It's the idiots can't look and judge what someone else may or may not be fixing to do, but it is possible if you practice safe driving habits.... That word however "safe driving habits" is something 90% of the drivers in this town don't have a clue what it means though.......

San Angelo drivers truly are learning disabled. Lmao on the comment about drivers not being able to read English well. (not my problem). Driving is not difficult and we think dumbing down the traffic system will help?

Generally, when I am in a close call it is because people don't yield on the green light. Perhaps a blinking yellow turn arrow would be better.
However, many don't yield at all. Last night I was going home and exited by Suddenlink. A black Wrangler failed to yeild and kept going in front of a gas tanker. A GAS TANKER! In the mean time, the truck slammed on it's brakes and had a hard time missing the Wrangler....could have been disastrous.

This problem is easy to fix. Simply make the left turn arrow after the green light like it is in the southbound lane near McDonalds.

It's been almost 6 months since Aaron was killed there...and still no charges been filed...people commit crimes get caught, indicted and gone to court already but nothing for the lady that caused the accident. I think their just waiting till most people forget and reduce her charge.