ARLINGTON, TX — The Pewitt Brahmas scored 14 points in the final few minutes of the second quarter to give Gunter a scare, but the Tigers dominated the rest of the game on their way to their second state championship in school history.

Gunter jumped out to a 14-0 lead just eight minutes into the game.  Senior running back Clayton Reed, who was name the Offensive Player of the Game, had 59 yards on six carries in the first quarter.

He got his first touchdown of the game on a 12 yard rush on the opening possession.  The run punctuated a 7 play, 70 yard drive.  Gunter overwhelmed Pewitt with the number of offensive weapons they had.

Reed, Bryson Rigsby, and the Defensive Player of the Game Peyton Lowe were incredible out of the backfield all game long.  Gunter could hand it to any of them in any direction at any point and have success.

Pewitt showed signs of life after Gunter quarterback Hudson Graham snuck it in from the one yard line to make it 14-0.

They went 65 yards in 2:35, and senior signal caller Cross Holder matched Graham with a sneak of his own.  He then one upped him by throwing the two-point try to Kadrien Johnson to make it 14-8 with 1:46 left in the first.

Gunter went 3-3 on drives when Reed got his second TD three minutes into the second quarter.  They marched slowly down the field.  Graham had no reason to throw, and Reed jogged into the end zone on their 10th play to cap the 57 yard drive.

Pewitt's defense gave the Brahmas a much need jolt two possessions later.  Their offense went three and out, giving Gunter the ball right back.

Graham dropped back to pass a couple plays into the drive and launched it deep.  The pass was a little overthrown and Johnson picked it off around the 20.  He put his running back skill to use and zigged and zagged his way down the field for possibly the most entertaining pick six you will find.

He needed 80 yards to score but probably ended up running 150.

Now 22-14, Pewitt recovered an onside kick at the Gunter 30.  They could not capitalize, though, and gave the ball right back.

On the first play of the ensuing drive, Johnson read Graham and undercut a pass on an out route for his second interception. 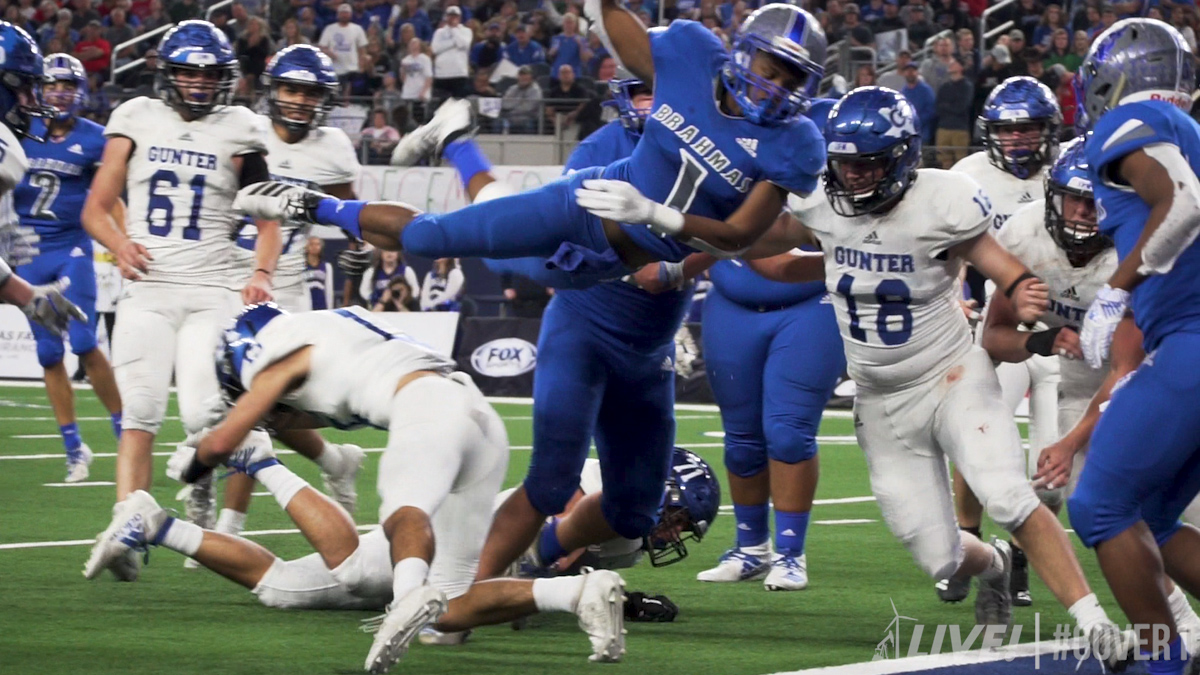 Kadrien Johnson goes up and over for his first offensive TD of the game (LIVE! Photo/Manny Diaz)

Pewitt was able to take advantage of this big play and went 37 yards to tie the game with 10 seconds remaining in the half.  Kadrien Johnson leapt over the Gunter defense on 4th and goal from the one as the clock was winding down.

Pewitt had all the momentum heading into the locker rooms at the break, but Gunter came out ready to finish.

The Tigers went back to their first quarter ways and scored 21 points in the second half while shutting Pewitt out.

Defensively, Gunter held Pewitt to just 48 total yards and three first downs in the second half.  They could not breathe.

Cross finished the game 5 of 12 for 44 yards passing.  31 of those yards came on a first half pass to senior La'Jathan Allen.  Allen was also their second leading rusher with 46 yards on 15 carries. The final score was 43-22 Gunter.

Kei'untray Hawkins led the way with 48 yards on 5 touches.

Peyton Lowe was named the Defensive Player of the Game thanks to 7.5 total tackles (5 solo) and 2.5 tackles for loss.

Clayton Reed was named the Offensive Player of the Game.

Gunter won their first state championship in 2016, so this is their seniors' second during their time as a Tiger.

Follow this link for a live play by play recap of the game.