SAN ANGELO, TX — Despite the hype of the Weatherford Kangaroos' quarterback who earned a D1 commit to the SEC at Vanderbilt, the San Angelo Central Bobcats defense shut down QB Ken Seals' air attack for most of the first half.

The first possession after a Weatherford kickoff to Central saw Central march the ball down the field 65 yards in seven plays topping it off with a 14-yard reception from QB Malachi Brown to junior receiver Joseph Gathecha in the end zone. The extra point was good and Central had a 7-0 lead and all the momentum

After a touchback during the kickoff, Weatherford tried to answer starting at their own 25 yard line. During the drive, the Central defense was effective covering all open Kangaroo receivers and broke up multiple Seals passes. Weatherford could not deliver once in the red zone and Central ended the Kangaroo drive at Central's 12. Weatherford settled for a field goal, making the score 7-3.

With 5:58 left in the 1st, it was the Bobcats' ball again, starting at their own 25 after a touchback.

Central's offense began a process of introducing the running game with limited success. But Central's penalties started to pop up here and there setting back progress. Despite taking more time to get the run game established, the QB Malachi Brown and his cadre of receivers making big plays  kept the march alive. On the sixth play of the drive, Brown showed a great degree of patience and agility and the O-line protected him. He found WR Tanner Dabbert wide open right up the middle for a gain of 13. Then, four plays later, a Brown pass to WR Jalen Leifeste right up the middle for a 17 yard gain to the Weatherford 20 set up a Christian Gabaldon reception in the right side of the end zone. Central led 14-3 after Erick Rodriguez kicked the extra point with 10 seconds left in the first.

Weatherford's special teams tried their best to answer the next drive when Weatherford's Keehlyn Howard returned the ball to the Central 49. After a penalty for blocking in the back near the location of the catch, however, the ball was reset to the Weatherford 9. The Weatherford drive was plagued with multiple incomplete passes forcing them to punt and Central had the ball again at their own 37. 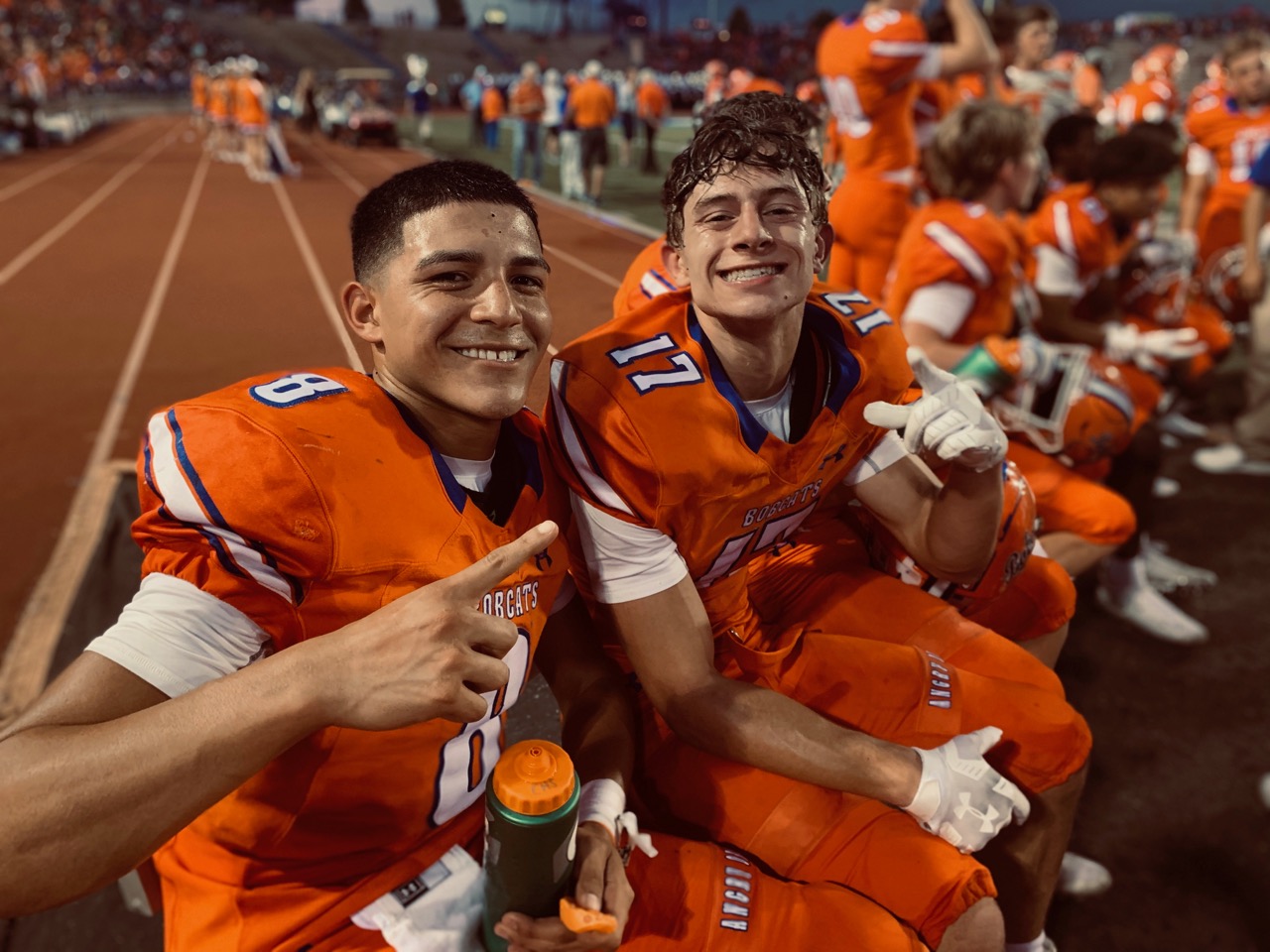 A holding penalty called back a 57-yard reception by Tanner Dabbert to the Weatherford 10 yard line. The ball was reset back at the Central 27. Malachi Brown, with the running game not fully developed, got the ball back to the Central 39 on a designed keeper. The Brown-Dabbert pass-reception machine marched the ball to the 50. Mixing quarterback runs with passing plays kept Weatherford's defense off kilter and the drive ended with a QB keeper to the left side of the end zone. With a good extra point the score was 13-3, Bobcats leading.

A fumble by Weatherford's quarterback Ken Seals at the conclusion of a 24-yard run to the 50 yard line gave Central's offense one more scoring drive. A 24-yard pass from Malachi Brown to Christian Gabaldon set up an 18-yard reception by Tanner Dabbert in the left side of the end zone. During the play, Weatherford cornerback Brendon Lopez injured himself committing a facemask against Dabbert. Central added 7 more, making it 28-3 with 4:01 left in the half.

On Weatherford's next possession, they finally scored a touchdown. Starting at their own 25, a they mixed the run with the pass to march the ball to the 15 yard line with 1:15 left in the half. It was 4th down and inches and Central's defense was hoping for a stop, but Weatherford made a power running play to get the 1st. The next play, Weatherford QB Seals connected with WR Seth Robertson in the end zone. It was 28-10 with 42 seconds left in the half.

On Central's next possession, a 17-yard reception by Joseph Gathecha put the Bobcats in the red zone, but Weatherford's senior LB Keehlyn Howard tipped a Malachi Brown pass resulting in an incompletion the next play. A second incompletion with 3 seconds left in the half forced Central to take the bird in the hand and Erick Rodriguez kicked a 39-yard field goal making it 31-10 at the end of the half.

The much-hyped Weatherford offense led by Seals missed several opportunities in the first half. Yet, towards the end of the half, their offense settled down and they were able to show they had the ability to score. The question on everyones' mind at the end of the half was what adjustments would Weatherford make to overcome the scrappy Central defense and the dominant Central offense?

Neither team had established much of a running game. But Central had a weapon Weatherford did not appear to have -- a scrambling, running quarterback capable of explosive plays to keep each drive alive.

The first half was characterized by watching Weatherford's hype fizzle. The question was, would this continue into the second half?

Weatherford started the second half with a bang. On a quarterback keeper, Ken Seals ran 60 yards to score. It was 31-17 after the kick was good.

Central had to punt on their next possession, setting up another scoring drive by Weatherford, led by a quarterback run attack, closing the gap to 31-24 with Central still leading.

Central finally got their running game going led by RB Kris Jackson on the next drive. Two penalties, including a hard hitting personal foul against WR Gathetcha, stuffed the Bobcats at their own 15. it was the one-two punch of a 20-yard Malachi Brown keeper to the 35 yard line and an 8-yard run by RB Kris Jackson that kept the drive alive. But Weatherford forced the Bobcats to punt anyway.

Central's Brown-Jackson attack wasn't potent enough yet, however. Central was forced to punt from their own 39. Weatherford had a chance to retake the momentum with their own quarterback-running back duo in Neal and #3 Dez Forrest.

The two moved the ball with a combination of short passes and runs from Weatherford's 23 yard line to Central's 24 in just four plays. A Neal pass across the middle to Forrest for the score tied the game 31-31 after the extra point.

It was now Central's turn.

Central's drive was enhanced by a 71-yard run from Central's 24 yard line to Weatherford's 5 by Jackson. A 5-yard Brown keeper up the middle got the score and Central regained the lead, 38-31, with 5:07 left in the game.

Weatherford was able to mix its version of the run and pass on its next possession to tie the game again 38-38 after a Dez Forrest 17-yard run up the middle into the end zone.

With just 2:32 left in the tied game, Central had their backs against the wall -- and the clock. Central added the screen pass coupled with slants and crossing routes to the quarterback keepers and Jackson's runs to move the ball from their own 25 to the Weatherford 5 yard line.

The stakes were high for Weatherford, who called for a time out when Central was 1st and goal at the Weatherford 5. Whatever the Kangaroos discussed during the break couldn't stop the Malachi Brown designed keeper into the end zone to put Central on top 45-38 with 9 seconds left in the game.

After a short kickoff return, Weatherford had one play, starting at their own 17, to tie the score. Dez Forrest, on a crossing route across the middle, dropped Neal's pass ending all hopes of a one-play comeback.

Weatherford's offense racked up 440 yards with 208 passing yards and 232 rushing yards. Seals had 168 yards rushing and Forrest had 64 yards. Central racked up 497 yards of offense with 270 in the air and 227 on the ground. Brown had 122 yards rushing including 3 rushing touchdowns. Jackson had 106 yards rushing.

This win makes Central 3-2 overall and 1-0 in district play. The Bobcats travel to Euless-Trinity next Friday. Weatherford is 4-1 and 0-1 in the district. They host Haltom City in Weatherford Friday.