SAN ANGELO, TX — The City of San Angelo Development Corporation has entered a public-private partnership with South Plains Lamesa Railroad (SPLRR) for the development of a multi-commodity railroad transloading facility, otherwise known as a rail port. The port will enhance the efficiency and profitability of industry in the Concho Valley by delivering bulk freight imports and exports to the United States and Mexico.

The facility will be located on a 180-acre tract east of Schwertner Road between FM 2105 and 50th Street. It will connect to the Texas Pacifico Transportation branch of the South Orient Rail Line, the portion of railroad that spans from Presidio, Mexico, up to San Angelo Junction in Coleman County.

The sale of the 180-acre site to SPLRR closed in October 2020. Construction will begin prior to the end of the year and initial operations should begin January 2021. SPLRR will oversee the design, construction and management of the rail port.

“The relationship built between the City of San Angelo and South Plains Lamesa Railroad will deliver a major economic development service to San Angelo and the Concho Valley,” said Michael Looney, vice president of economic development for the San Angelo Chamber of Commerce. “Rail freight will greatly reduce costs and increase the cargo transportation efficiencies of our many industries that will, in turn, create more economic prosperity for our city and region.

“The San Angelo Chamber of Commerce is very proud to partner with the City of San Angelo Development Corporation staff and board of directors on this historic industrial development.”

South Plains Lamesa Railroad, LTD. is uniquely qualified to develop, maintain and operate a multi-commodity bulk freight facility. Established in 1993, SPLRR owns and operates a rail port in Slaton, Texas that has expanded from an original five miles to now more than 23 miles of track. The company also operates a rail port facility at Pueblo, Colorado with 28 miles of track, providing industrial switching, rail car storage, rail car repairs and other switching services.

Texas Pacifico Transportation (TXPF) has endorsed the San Angelo Rail Port operation and entered into a services agreement with SPLRR. TXPF is a major partner in the development and success of the South Orient Rail Line (SORR), having just awarded a $14 million contract for rail improvement work. This was a significant step in the reopening of the rail freight corridor that connects freight movements between Texas and Mexico.

“The City of San Angelo Development Corporation (COSADC) is proud to be a partner in the development of the San Angelo Rail Port by securing the property for the project and entering into a performance agreement with SPLRR that will operate and eventually own the facility,” said Guy Andrews, COSADC economic development director.

“The impetus for the rail port came about by extensive investigation by our Chamber of Commerce partners lead by Michael Looney and consultant Rodger Horton of Shea Transportation Consulting into the feasibility and demand for such a facility.” 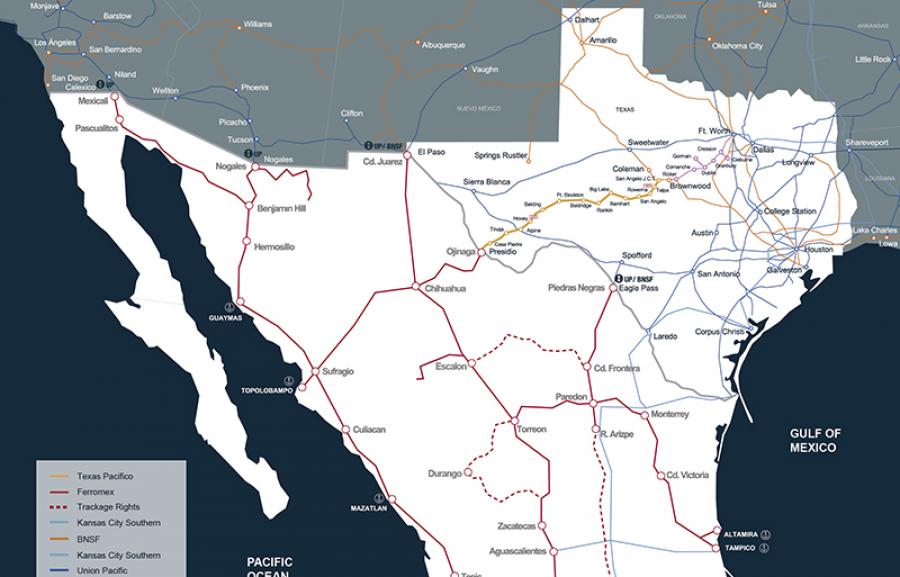 A map of the rail line that traverses from Coleman to San Angelo to the Mexico border at Presidio with connections on either end to the US or Mexico markets.

SPLRR is now entering into service agreements with customers. For specifics on the project and information about rail freight opportunities, please contact: