Why So Many American Eagle Jets are Parked at Mathis Field

AMR Corporation, parent of Envoy, the company that operates American Eagle airline flights to and from the Dallas/Fort Worth International Airport and San Angelo has chosen Mathis Field to store its retiring inventory of Embraer ERJ 140 jets. It’s a good deal for the City of San Angelo said Mathis Field Airport Director Luis Elguezabal. AMR Corporation is paying the city $192 per jet per month to park them here. Eventually, the entire retired fleet may be parked on the Mathis Field ramp.

In all there were 59 total of these jets in American Eagle’s fleet. Elguezabal said there are 39 in storage in San Angelo right now, with the remainder expected to arrive soon. Healthy passenger loads have delayed the retirement of the final aircraft, he said.

Out on the ramp, the jets are kept in near-flying condition, which requires engine runs about every 15 days. During the engine runs, a maintenance crewman said they would taxi the individual jet down the parallel taxiway next to runway 18 to the south end of the field. If you see the jets move around from time-to-time, that’s why.

Elguezabal said that there is ample parking space on the Mathis ramp for more storage parking. The old operations building and hangar left over from the former GTE mini-air force appears to be in good shape on the north end of the field. There is ample space for aviation-related businesses at the airport, Elguezabal said. The FAA refurbished the old US Army Air Force parking apron several years ago.

Inside the ERJs on the ramp, the avionics have been stripped out. The only piece of instrumentation left is what is required to monitor the engine runs.

If a buyer is found, the planes will require extensive maintenance work to bring them back to life. For example, to be FAA certified, each plane needs the CRTs and avionics packages re-installed. A member of the maintenance crew said that the retractable gear have been extended for so long in storage that the extension and retraction system would need to be checked for operation before flying off and putting the gear up. But the most expensive part of the plane, two Rolls-Royce AE 3007 series turbofan engines, are maintained, if only minimally. 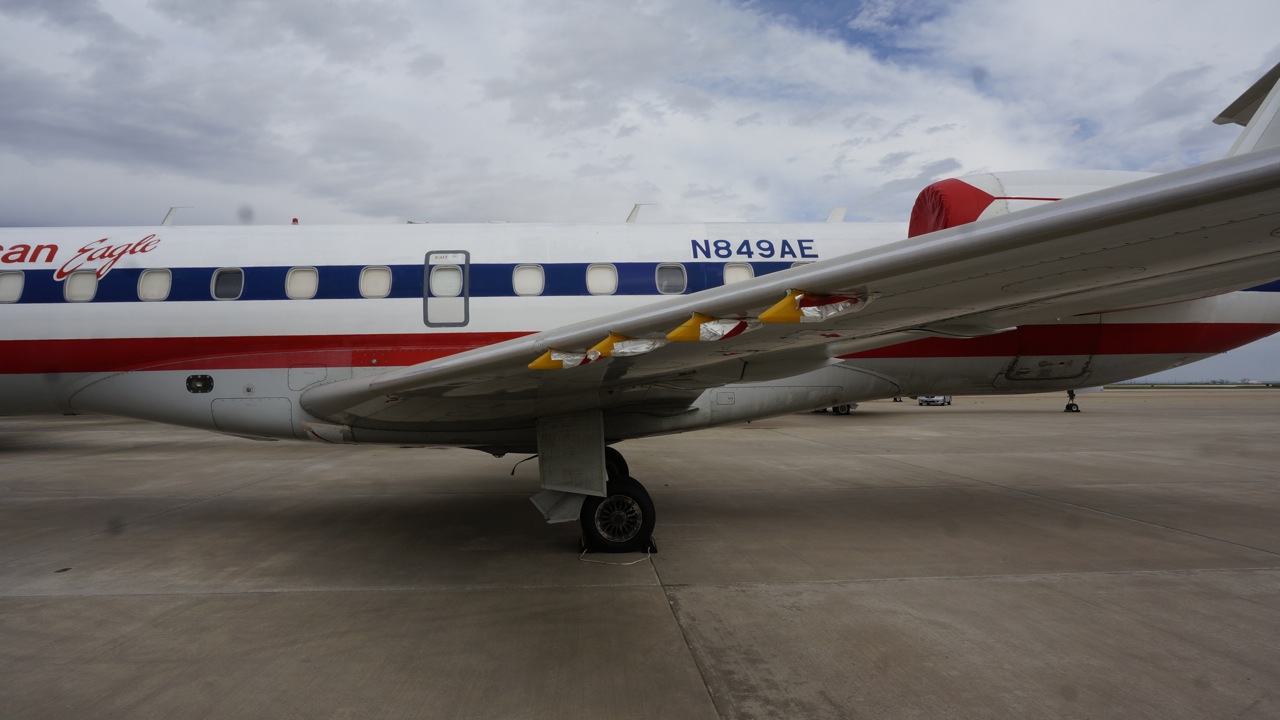 How long will the jets remain at Mathis? Elguezabal isn’t certain, but said they can stay as long as they need the space. AMR has a month-to-month lease for the ramp parking spaces, he said.

Today, American Eagle is operating the larger ERJ 145 aircraft into and out of San Angelo for the majority of the flights.

in Coronavirus: Death Toll and Hospitalizations Rise in San Angelo