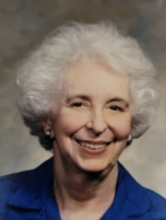 Carolyn died surrounded by her family on November 24th, 2022. Carolyn was born in Hillsboro, Texas on August 31, 1933 to Albert and Faye Kidd. The family moved to Huntsville, Texas when Carolyn was 10 and she graduated from Huntsville High School and Sam Houston State College with a Bachelor’s degree in education, which began her career in teaching. She married Warren Louis Griffin in May of 1952 and they had two children Louis Henry and Mary Laura. They settled in San Angelo in 1964. Carolyn taught many grade levels but her passion was the many years she spent teaching homebound students for San Angelo Independent School District. Together, Warren and Carolyn were very active in their home church First United Methodist, the Bayith Sunday School class, and the Emmaus Community. They served on a mission team which built and supported the first Methodist Church in Vologda, Russia and were on a team that took the Emmaus Walk to Australia. Carolyn loved gardening and doting on her grandchildren and great-grandchildren. Carolyn is survived by her daughter Laura Burkhalter (Johnny) of San Angelo, her daughter-in-law Cindy Griffin of Kauai, Hawaii, five grandchildren Melissa Nealy (Dan) of Rosenberg, Sarah Claunch (Philip) of Celina, Jeremy Sanders (Shannon) of San Antonio, Tammy Griffin of Houston and Stephen Griffin of Houston and six great grandchildren. She was preceded in death by her husband Warren and her son Louis.