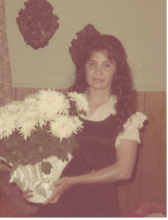 Services will be at a later date under the direction of Robert Massie Funeral Home.

Mrs. Ramos was born April 27, 1936 in Hebbronville to Miguel and Sofia Leal. Adelaida has been a resident of San Angelo since 1960. She married Juan Ramos on October 20, 1962 in San Angelo. He preceded her in death on July 12, 2014. Adelaida was a member of the Jehovah Witness Church.