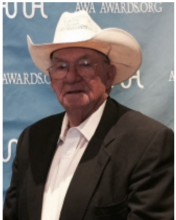 H.F. Ritchie was born on May 26th, 1939, in Quanah, Texas to Elmore and Donna Ritchie. He grew up with four sisters. H.F., better known as “Ritchie” or “PawPaw,” grew up playing guitar and mandolin, singing, and spreading wildly inappropriate jokes. He first stepped foot on stage at six years old, that was the beginning of his 65-year music career. While in high school at Frank Phillips, Ritchie joined the choir. His choir teacher put together a group of five high school boys called The Five Bops. He later attended Baylor University.

In November 1974, after a previous marriage that blessed him with two children, H.F. married Wanda June Ritchie, better known as ‘June,’ the love of his life. In 1966, Ritchie settled down in Big Lake, Texas. He first worked at Harbison-Fischer, later moved on to own his business, Santa Rita Pump and Supply. He then worked and finished his salesman career with NOV at the age of 76. Ritchie served as mayor of Big Lake from 1984 to 1998 and was chairman of the Concho Valley Council of Government for three years. He also was chairman of the Texas Association of Regional Councils and represented Texas at a National Meeting.

Towards the end of his music career, Ritchie recorded an album of ten songs, eight of which he wrote himself. One of his family’s favorites being ‘Santa Rita No. 1’ about the gusher that came in west of Big Lake and started the West Texas oil boom. He shared the stage with many music legends, such as Bill Dees, Roy Orbison, Hank Thompson, Hank Williams, Sr., Red Stegall, The Big Popper, and many more.
Ritchie received an outstanding amount of awards in his lifetime from Citizen of the Year, Pioneer of the Year, Western Swing Hero, and was even inducted into the Western Swing Hall of Fame. ‘PawPaw’ liked to spend his free time fishing, drinking coffee with friends, and spoiling his grandkids. Many of his friends and family would describe him as selfless, kindhearted, and a man with a heart of gold.

He is also survived by sister Pasty Reardon of Amarillo, Texas; sister-in-laws Naomi Williamson of Colorado City, Texas and Patsy Painter of Midland, Texas; brother-in-laws Rodney Oaks of Ackerly, Texas and Leon Oaks of San Angelo, Texas. Several nieces and nephews and more friends than you can count. Let us not forget his pride and joy, dog Blaze.

In lieu of flowers, the family requests that donations be made to a few of Ritchie’s favorites: West Texas Boys Ranch, Reagan County 4-H, and the San Angelo Cowboy Gathering.