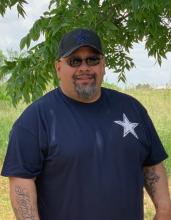 Demas Hernandez, of San Angelo, was called to celebrate his 45th birthday with Christ in Heaven on June 20, 2021.
Public viewing will be on Thursday, June 24th from 9:00 AM until 8:00 PM at Robert Massie Funeral Home. A prayer service will begin at 6:00 PM that evening. The funeral service will be held on Friday, June 25, 2021, at 10:00 AM in the Robert Massie Riverside Chapel. Pastor Aron Gonzales of the House of Jireh and Luis Soto will officiate. Arrangements are by Robert Massie Funeral Home.
Demas was born in San Angelo on June 20, 1976, to his parents, Arthur G. and Enedina Mireles Hernandez.
He was a hard worker and most recently worked as a truck driver for Blue Line Drilling; however, he had been driving a truck since he was 18.
On October 17, 1998, he married the love of his life, Amy Lopez. Together, they created a family and a life to be envied. Demas enjoyed life and although he would deny it, he was often the life of the party. People were drawn to him. He was a formable man with the heart of a teddy bear. He loved music and dancing and he was also a drummer. Demas could be a bit of a prankster and liked to joke around. He needed to have a sense of humor, for he was a diehard Cowboy fan! He had a secret obsession with Charmin toilet tissue, and everyone knew that was the only toilet tissue allowed in the house! He was also a talented cook who loved to grill and there is some speculation that God needed an expert to prepare a feast and thus called him home.
There will never be anyone quite like Demas, he loved his family fiercely and has left them a legacy of love.
He was preceded in death by his father, Arthur; by a sister, Virginia Hernandez Serrano; and by his maternal and paternal grandparents.
Demas is lovingly survived by his wife Amy; and his pride and joys, his daughter, Bianca Marie Hernandez; his son, Anthony Demas Hernandez; his mother, Enedina Hernandez; his sisters, Veronica Soto and Luis and Stacy Hernandez; his brother, Justin Murillo and Sarah; his parents-in-law, Juan and Estella Lopez; his brother-in-law, Marty Lopez and Misty Gallimore; his nephews, Miguel, Daniel, and Jacob Soto, Micah Brandon and a niece Averi Green.
We will love you always and forever, you may be gone but you will never be forgotten #57HDZ.

To send flowers to the family or plant a tree in memory of Demas Hernandez, please visit our floral store.