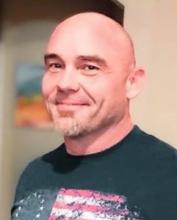 Eric Stacey Crawford passed from this earth at the age of forty-eight on June 19, 2021.
He was born on November 17, 1972, in Shawnee, Oklahoma. He graduated in 1991 from Maud High School in Maud, Oklahoma where he took his grandmother to Prom because she was never able to attend during her schooling. His act of kindness became such a sensation Johnny Carson heard about them and invited Eric and Edna to come on his show. Unfortunately, she was too afraid to get on a plane and Eric would not go without her. Eric was raised by his mother in a single-family household. His brother, David, wants everyone to know all his siblings looked up to Eric as a father figure, this is how much he meant to them growing up.
Eric started bootcamp in Lawton, Oklahoma at seventeen years of age. He was assistant platoon guide. He attended East Central University, where he was 2nd Lieutenant. He graduated R.O.T.C. along with a Bachelors Degree in Business Administration. He went to officer training school in El Paso. He was a tank commander at Fort Riley, Kansas, where he was promoted to Lieutenant. After serving his time at Fort Riley, he went to jump school at Fort Benning, Georgia. His mother quizzed him "Why do you want to jump out of a perfectly good airplane?" He replied, "Because I am afraid of heights, and I need to get over it.". This was Eric's character. A man who would always overcome.
During his time as an army reservist, Eric started his business career with Farmers Insurance in Norman, Oklahoma. After taking the District Manager position in Lufkin he was called to active duty in 2004 and served his country in Mosul, Iraq over the next two years. He was awarded many commendations, including the Bronze Star for his sacrifice. The Bronze Star Medal is awarded to a soldier for heroic achievement and meritorious service in a combat zone.
Upon completing his tour overseas, he moved to San Angelo in 2007 where he excelled as District Manager for over a decade. In his first year, he won the 'Life Award' with Farmers, a recognition given to the district which sells the most life insurance policies in the entire nation. During his time as D.M. he received almost every award his company had available to win, and Eric has got the boxes full of trophies in the attic to prove it. Eric retired from the Army as a Major after 22 years of honorable service.
He actively supported the Wounded Warrior Project and many other Veteran organizations.
Eric was generous to a fault. Whether it be to family or friends, he always had a word of encouragement. His many accomplishments were immeasurable. He had so many people that looked up to him and Eric always put others before himself.
On September 14, 2019, Eric gave Karah his last name on a beach in Costa Rica. He was the love of her life, and she his. In such a short period of time they packed in a lifetime full of love, laughter and fun. Their fleeting time has given Karah a bountiful reserve of memories she will be able to hold on to until she sees him again.
With all his multiple accolades at school, in business and the military, in Eric's own heart, his greatest accomplishment was being a devoted father, and giving his love, to his three precious children. Addie, Aubrie and Kannon truly meant everything in this world to him.
Eric was preceded in death by his grandmother Edna Crawford, great grandparents Netlie and Custer Crawford, Allie Duncan and his Uncle Mark Crawford.
Eric is survived by his loving wife, Karah Crawford "My Girl"; his adored children, Addie, Aubrie, Kannon, Maki and Baylor of San Angelo; his grandfather, David Crawford of Maud, Oklahoma; his mother, Kim Crawford of Norman, Oklahoma; his brother, David Bundy and wife Justice of Norman Oklahoma; his sisters, Tiffany and Nichole Bundy of Norman Oklahoma; and his aunt, Lynn Crawford of Shawnee Oklahoma; as well as many loving cousins, friends and fellow soldiers.


THAT MOST DIFFICULT THING
That most difficult thing -
To see something
From someone else's point of view.

To get inside someone else's skin
And feel what they feel,
Their joy, their sorrow
As though it were our own -
To know.
-Unknown

To send flowers to the family or plant a tree in memory of Eric Stacey Crawford, please visit our floral store.