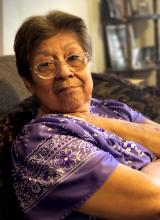 Rosa Maria Rico age 73, gained her angel wings Thursday, June 17, 2021, in San Angelo Texas.
Mrs. Rico was born April 17, 1948, in Acúna Coahuila Mexico, Rosa married Rosario A. Rico May 23, 1971, in Acúna Coahuila Mexico. Rosa lived in Big Lake Texas for 32 years where she began her life as a homemaker. After becoming ill, she moved to San Angelo in 2002 to be closer to her physicians. She was a member of Cristiana Maranatha Church where she loved to serve and praise God.

To send flowers to the family or plant a tree in memory of Rosa Maria (Oviedo) Rico, please visit our floral store.