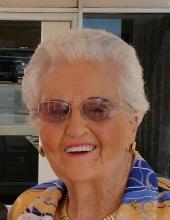 Winnie Maurine (Posey) Long, age 97, of San Angelo, Texas passed away on Wednesday, May 12. A celebration of life service will be held at First Christian Church, 29 North Oakes, San Angelo, Texas on Saturday, May 22 at 10:00 a.m. with the Rev. T. J. Shoop-York officiating. Following the service, an inurnment will be held in the columbarium.

Posey was born May 29, 1923, in San Angelo, Texas to Leonard Ulmont and Winnie Davis Camp Posey. She attended area schools and graduated from Water Valley High School, Water Valley, Texas in May 1940. She attended San Angelo Junior College from 1940-1941.

Posey was active in all sports in high school and even played basketball. She was an avid bowler and secretary of several leagues. She loved all sports even after she could no longer participate, she enjoyed watching them in person or on television. She particularly loved Duke University basketball and all of her son’s (Kevin) teams.

Posey was somewhat of a tomboy growing up and was always out helping her father with ranch work. In later years, she did please her mother by needle pointing a pillow which her mother entered in the exhibits of the San Angelo Fat Stock Show and Rodeo and won a red ribbon.

Posey and Keith were long time members of the Lake View Christian Church before moving to Abilene, Texas in 1969 at which time Keith became the Media Director for Region XIV Education Service Center. They were active members of the Brookhollow Christian Church in Abilene. When Keith took early retirement, they moved back to San Angelo and joined First Christian Church. Posey was a member of the Henson Sunday School Class, served as Elder, and Chair of the Elders. One of her most rewarding positions in the church was being on the Nurture Committee serving meals to the bereaved. Posey was a Stephen Minister and had a greeting card ministry that touched most every family in the church.

In lieu of flowers, the family requests that donations be made to the “Keith Long Memorial Scholarship” fund (P. O. Box 61532, San Angelo, Texas 76906).