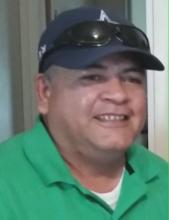 On April 24, 2021, Martin Esquivel “Lulu” Duarte, age 56, of Killeen, Texas, was called home by our Heavenly Father. Martin passed peacefully, surrounded by his loving wife, daughter and two of his grandchildren.

Martin was born on August 11, 1964, in San Angelo, Texas to Ignacio Duarte, Sr. and Augustine Duarte. He attended school in San Angelo and resided there until the age of 25. He also met and married the love of his life and best friend, his wife Terrie, in San Angelo. They were married for 36 wonderful years, have one lovely daughter and five loving grandchildren.

He honorably served his country from 1989 to 2013 beginning in the Army National Guard followed by enlisting for active duty in the U.S. Army. He was a Staff Sergeant in the U.S. Army. During his years of military service, he earned several medals. His first duty station was in Baumholder, Germany followed by El Paso, Texas; Louisville, Kentucky and later Killeen, Texas, where he retired in 2013. Additionally, Martin served one tour in Operation Desert Storm Desert Shield and two tours in Iraq.

He also worked for the Tom Green County Sheriff’s Department, starting off as a Dispatcher then advancing to a Jailer. After relocating to Killeen, Martin successfully completed the Deputy Certification Program. During his active duty in Killeen, he volunteered his time off as a Deputy in Coryell County. He was proud to be a Deputy and of his achievements.

Martin was an amazing husband, father and “Popo” who loved his family with all his heart. He was a provider for his family and was determined to give them the life he felt they deserved. His family meant more to him than anything in the world. For those blessed to have known him, experienced his kind heart and his genuine soul. He was a gentleman with a smile to light up a room.

His morning routine began with his passion of listening to Tejano music with the company of his beautiful wife as they enjoyed their morning coffee. He also enjoyed watching his “Cowboys” play as he was a devoted Dallas Cowboys football fan. He had a passion for life with a positive outlook and took pride in everything he did.

“It broke my heart to lose you, but you didn’t go alone
Part of me went with you, the day God called you home
Your memory is a keepsake from which I’ll never part
God has you in His arms, I have you in my heart”