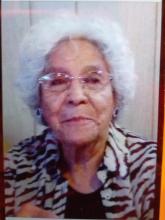 Mrs. Peña was born September 9, 1926 to Pedro and Francesca Atolano in San Angelo where she has been a lifelong resident. Antonia married Jesse Peña, Sr. on February 14, 1945 in San Angelo. He preceded her in death on June 16, 1987. Antonia worked as a custodian at Goodfellow Air Force Base, and San Angelo State School. She was also a nanny for Dr. Hooker's children for over 25 years and was a caregiver. Antonia was a founding member of River City Baptist Church.

To send flowers to the family or plant a tree in memory of Antonia A Peña, please visit our floral store.