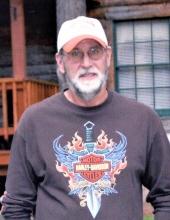 Mark Tucker, 67, died peacefully at his home in San Angelo on February 17, 2021.
A lifelong resident of San Angelo, Mark was born on July 27, 1953 to Walter and Bessie Mae Tucker. He grew up in the family business, Tucker Drilling Company, where he worked until his retirement in 1996. Mark enjoyed a long and active retirement and had a passion for tinkering with cars and motorcycles. He loved to take long rides and road trips on his motorcycle where he enjoyed the peace and beauty of the open road.
Mark was a committed and loving husband, father, grandfather, brother and friend. He was a sincere, down-to-earth man who was genuine in all his actions. To family, friends, and anyone he met, he was an attentive listener, always showing interest in others. He was also a man of deep faith who cherished his AA family, where he was an active member for 38 years, sharing his support with countless friends and individuals with their recoveries. Mark will be remembered for his fierce loyalty and kindness and will be greatly missed by all that knew and loved him.
Survivors include his loving wife, Nancy Mueller Tucker of San Angelo; his daughter, Christa Murray (Jeff) of Celina; stepchildren Julie Wood (Clay) of Burleson; Jon Kennedy (Alexis) of Burleson; and Michelle Garza (Jason) of San Antonio; grandchildren (who affectionately called him PaPa and Whiskers) Wyatt and Madison Murray, Ella Rose and Annagrace Wood, and Grayson and Hazel Kennedy. Mark is also survived by brother Jimmy Tucker (Pat) of San Angelo; and sister Sandy Griffin (Don) of Holly Lake Ranch, TX. He was preceded in death by his parents, Walter and Bessie Mae Tucker, brother Kenneth Tucker, and brother Larry Tucker.
Visitation will be held on Monday, February 22 from 4 to 5:30 p.m. at Harper Funeral Home. The funeral service will be held Tuesday, February 23 at 10 a.m. at Harper Funeral Home. Private graveside services will be held following the service. In consideration of COVID protocols, face masks will be required by those in attendance.
Family and friends may share condolences and sign the online register book at
www.harper-funeralhome.com.