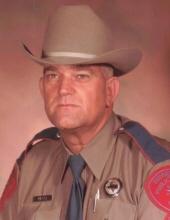 Bobby Lee Wilcox, 85, of Goldthwaite, Texas passed away from this life to the next into the Arms of His Lord and of his Christ on Thursday, January 21, 2021, following complications from pneumonia. He was born at home in Rattler Community in Mills County on January 4, 1936 to Arthur and Leona Wilcox. He was converted and baptized at the Jones Valley Baptist Church at a young age. He was raised as a Baptist and was a very active longtime member of the First Baptist Church of Goldthwaite. Bobby graduated from Goldthwaite High School in May 1954 and then later from the Texas Department of Public Safety in 1967.
On June 30, 1956, he married Patsy Bramblett, his high school sweetheart, soulmate and best friend and shared 64 years together. Bobby was always eager to share with others that he was only one day older than Patsy and that they both were delivered in their own homes by the same physician. After their marriage they moved to the old home place in Rattler Community where at this time the lake cabin Is located. After their return to Goldthwaite, they built their current home in March 1973.

Bobby served his country honorably in The United States Army, enlisting in 1954 -3 days after he graduated from high school and was stationed in Alaska for 18 months of the 3 years served. “He always said”, “In my day, we always stood as the National Anthem played and placed our hand over our heart” for The Pledge of Allegiance.” “If others don’t; I guess, it’s up to you kids.”
He was a proud mason of the Grand Masonic Lodge #694 A. F.& A.M. of Goldthwaite.
Bobby is the oldest living landowner that was born and raised in Rattler Community until the day he died. His passion was ranching under the Rocking W Brand and raising all livestock especially Brangus and Angus cattle; turkeys; sheep and goats. His farming included cotton; peanuts; watermelons as well as feed grains for his livestock. For many years, he rode his favorite horse Ole Sorrel to round up and work cattle. He truly was a real working cowboy for many years until he hung up his spurs and saddle.
His law career began in Mills County as a deputy sheriff from January 1, 1965 until February 1, 1967. Soon after, Bobby realized that he needed to provide a better future for his wife and four kids.
With his earlier experiences with law enforcement, a friend persuaded him to consider a career with the Texas Department of Law Enforcement in which Bobby served as a DPS State Trooper for 25 years retiring in 1993. He was stationed in Johnson City during the Presidency of Lyndon Baines Johnson and had the privilege to guard him while the President was visiting his ranch home. Bobby was then stationed in Lampasas until he got the rare opportunity to return to his hometown, Goldthwaite, to live around his mother, relatives and friends and ranch his land. On January 1, 1995, he ran for the Justice of Peace until he left office on December 31, 1998. He then returned to ranching full-time until the end of 2020.

In 1986, on his home place in Rattler Community, Bobby fulfilled his dream of building a cabin on the ranch land close to a conservation developed lake where his family could enjoy throughout the seasons f fishing and hunting. He was so proud when his whole family would gather for special occasions for steak dinners, barbeques, fish fries and hamburger cookouts as well as host family reunions. It was a great time for all, especially for the little ones to hunt for turtles, compete to see who could catch the most fish, learning how to play dominoes and spending hours in the water as well as all of us working the land by clearing brush and killing mesquite trees and a few rattle snakes. Relaxing and taking in the view was

over the top as we watched the beautiful sunrises and sunsets -this was known as Bobby’s “Happy Place.”

After retirement and with his social life being very important, Bobby and Patsy enjoyed fellowship and food with 11 couples in each of their homes known as the Hamburger Club; joining others for coffee and eating at the local café as well as playing dominoes several times a week with the Domino Players.

Bob is survived by Patsy, his devoted wife of 64 years; daughters and son, Delilah Harper (Ray) of San Angelo, Texas; Debbie Page (Dale) of Bangs, Texas, Troyce Wilcox (Becky) of San Angelo, Texas and Patti Stubblefield (Scott)of Brownwood, Texas; grandchildren, William Ray Harper II (Will) (Kymber); Hallee Harper-Kinney (Justin), Mattie Sanjuan (Fred); Jodi Duncan (Jason); Cody Page (Jennifer); Katlin Wilcox – Vasquez (Nick); Clare Hallmark (Adam); Macy Wilcox; Seth Stubblefield (Lauren); Alyssa Stubblefield; great-grandchildren, Addison Harper; William Ray Harper III (Tripp); Wesley Grace Sanjuan; Wyatt Sanjuan; Jaxon Duncan; Ryder Duncan; Ellie Duncan and Judah Stubblefield; sister-in-laws and brother- in-law, Bess Wilcox, Patsy Hanson, Linda Bramblett ; Carolyn and Doug Hampton, a special aunt, Darlene Wallace; numerous cousins and nieces and nephews.
He is preceded in death by his parents, Arthur and Leona Letbetter; 4 brothers and 3 sister-in-laws; Raymond and Johnnie Wilcox; Wayne Wilcox; Bill and Mary Hanson; Kenneth and Carol Hanson as well as his father-in-law and mother-in-law, L.B. and Wilma Bramblett.
Bobby was a devoted Christian who loved his Lord; a hard-working family man and a friend to many – he never met a stranger and treated everyone as he had known them forever. He will be missed greatly – certainly by Patsy and his family and friends. God called Bobby home to rest on a rainy day; then, presented a rainbow before sunset as a sign that “ALL IS WELL WITH MY SOUL”. “My Love – I will be waiting for you but for now, live each day to the fullest.”
The Wilcox family would like to extend a heartfelt thank you to the doctors, nurses, and staff of the Shannon Medical Center for the dedicated and genuinely sincere care they provide him.
Graveside services will be held 11:00 a.m. on Wednesday, January 27,2021 at the Goldthwaite Memorial Cemetery Memorial Pavilion. A Celebration of Life service will follow at 1:00 p.m. at the First Baptist Church at Goldthwaite under the direction Stacy-Wilkins Funeral Home.
A fund has been set-up for the Bobby Wilcox Youth Fair Scholarship. In lieu of flowers, the family encourages memorial gifts be made to the Mills County State Bank, Post Box 309, Goldthwaite, TX 76844-0309 or to any favorite charity of your choice.

Goldthwaite Memorial Cemetery
Located a short distance southwest of town on Texas Highway 16. The entrance is about 1.1 miles west of the intersection of TX-16 and US 183 on the south side of Goldthwaite.
Goldthwaite, TX N/A