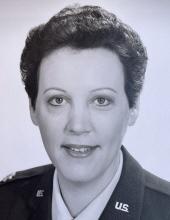 Constance Marie Whorton, of San Angelo, Texas, passed away on January 18, 2021 at the age of 67. She was born on October 18, 1953 in Florence, New Jersey to parents Lardner Clark Boyd Jr. and Constance Patricia Mcloughlin. She graduated from Florence TWP Memorial High school in 1971. Connie was always known to be a vibrant and funny woman who lit up the room. She received a bachelor’s degree in nursing from Widner College in 1975. She joined the US Airforce in April of 1976. While stationed in Greece she met her husband Jonathan Whorton who was a medication tech and Advanced Cardiac Life Support Instructor. Constance and Jonathan Whorton were happily married on December 8, 1979 and had two children Constance and Jonathan. Connie obtained a master’s of science degree in critical care from the University of Maryland in 1990. She was one of only 3 women selected to attend Air War college in Alabama and graduated in 1994 with a 4.0 grade point average. After 26 years of service in the US Airforce Connie retired in 2000 as a Full Bird Colonel. After retirement she took a position as the Director of Nursing at Johnsons Space Center in Houston, Texas. After two years she moved back to San Angelo, Texas to be with her family and became the Director of Quality Care at Community Medical Center. Connie was known for being an overachiever who never met an obstacle she could not overcome. She was an accomplished painter and loving wife and mother. She is survived by her husband of 40 years Jonathan S. Whorton, son Jonathan C. Whorton, daughter Constance Kelso and husband John, and 3 grandchildren Alyson, Owen, and Logan. She is also survived by her brothers L. Clark Boyd 3rd and Clinton J. Boyd, sister-in-laws Carolann and Darlene, and many cherished nephews and nieces. Funeral arrangements will be announced later. Thank you to all the staff at The Springs Memory Care for exceptional treatment and care. The family asks to please consider a tribute donation to the Alzheimer's Association.