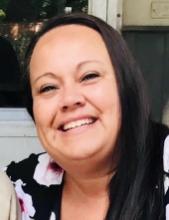 Yvonnette Pinedo Noriega, Age 48, Went to be with our lord on January 08, 2021. She was born in Los Angeles California. Yvonnette was the daughter of Ruben & Linda Pinedo. Yvonnette was the wife of Jessie Noriega and they shared 25 years of marriage together. Yvonnette was employed at All American Chevrolet for 23 years and 14 of those years she served as an office manager. Yvonnette was a member of San Angelo First Assembly Of God. Yvonnette enjoyed spending quality time with her family, she was her daughter Ragen’s #1 supporter, following her throughout her athletic career, she always pushed her son Jessie to be the best he could be allowing him to become the young man he is today. Yvonnette always took on the role as the proud mom. Yvonnette will be remembered most for her giving heart, her contagious laugh, her warm hugs but most of all for her strong faith in the Lord. Yvonnette is survived by her husband, Jessie Noriega. Her children, Ragen Noriega, Jessie Noriega Jr, Joshua Noriega and Anthony Noriega. Her grandchildren, JayLyn Noriega, Joshua Noriega Jr, and Julian Noriega. Her parents, Ruben & Linda Pinedo. Her brother, Carlos Martin Hurtado. By numerous nieces, nephews, uncles, aunts, cousins, sister in-laws, brother in-laws and life long friends. Yvonnette is proceeded in death by her great grandmother, Jovita Reyes, her grandfather, Gabino Reyes, her grandmother Rose Nunez, her grandfather, Gregorio Pinedo and grandmother, Guadalupe Pinedo. Her memorial service will be held on Monday January 11, 2021 at San Angelo First Assembly Of God, located at 1442 Edmund Blvd. San Angelo, TX 76901. Yvonnette’s Final viewing will be held from 10:00 AM to 1:00 PM, followed by her church services immediately after. Yvonnette’s burial service will proceed, taking place at Sonora Cemetery, located at 516 N Service Rd. Sonora, TX 76950.
--