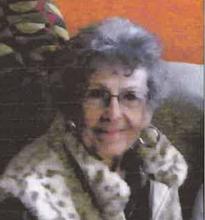 Deanie Eldridge was born in Quanah, Texas to F.F. and Adele Fleming on February 25, 1934. She went to school in San Angelo and graduated from Lakeview High School in 1952. She married William Anthony Eldridge on October 25, 1956 in Ft. Worth, Texas. Deanie was an Air Force wife who took care of her 3 girls and household, sewed for the Officers’ wives, built furniture, worked in auto parts, built and owned a miniature golf course with her husband and high school friends, then worked as a bookkeeper for the Carriage Dress Shoppe in San Angelo for several years before retiring 3 years ago. Deanie Eldridge, as manager, along with her teammates was inducted into the Lakeview High School Hall of Fame in 2012 for the 1952 Lakeview Maidens basketball team.

Deanie was preceded in death by her daughter, Karen Crossnoe; great-granddaughter, Kadyn Wilson; and sons-in-law, Michael Delavan and Boyce Kennedy.

The family wishes to extend sincere thanks to the staff at Arbor Terrace, Domingo Lopez and the staff at Odyssey Hospice.