SAN ANGELO, TX — The grand opening of the Heritage Park Saturday morning, Nov. 17, was a success. Heritage Park’s lead salesman, Lee Pfluger, was flanked by the head of the 1992 R/UDAT study that envisioned the small pocket park, Frank Gray; Matt Lewis, who managed the non-profit donations and endowment to maintain the park at the San Angelo Area Foundation; and the San Angelo ISD Director of Curriculum and Instruction Jana Reuter. Together, they introduced the park to a large and appreciative crowd. 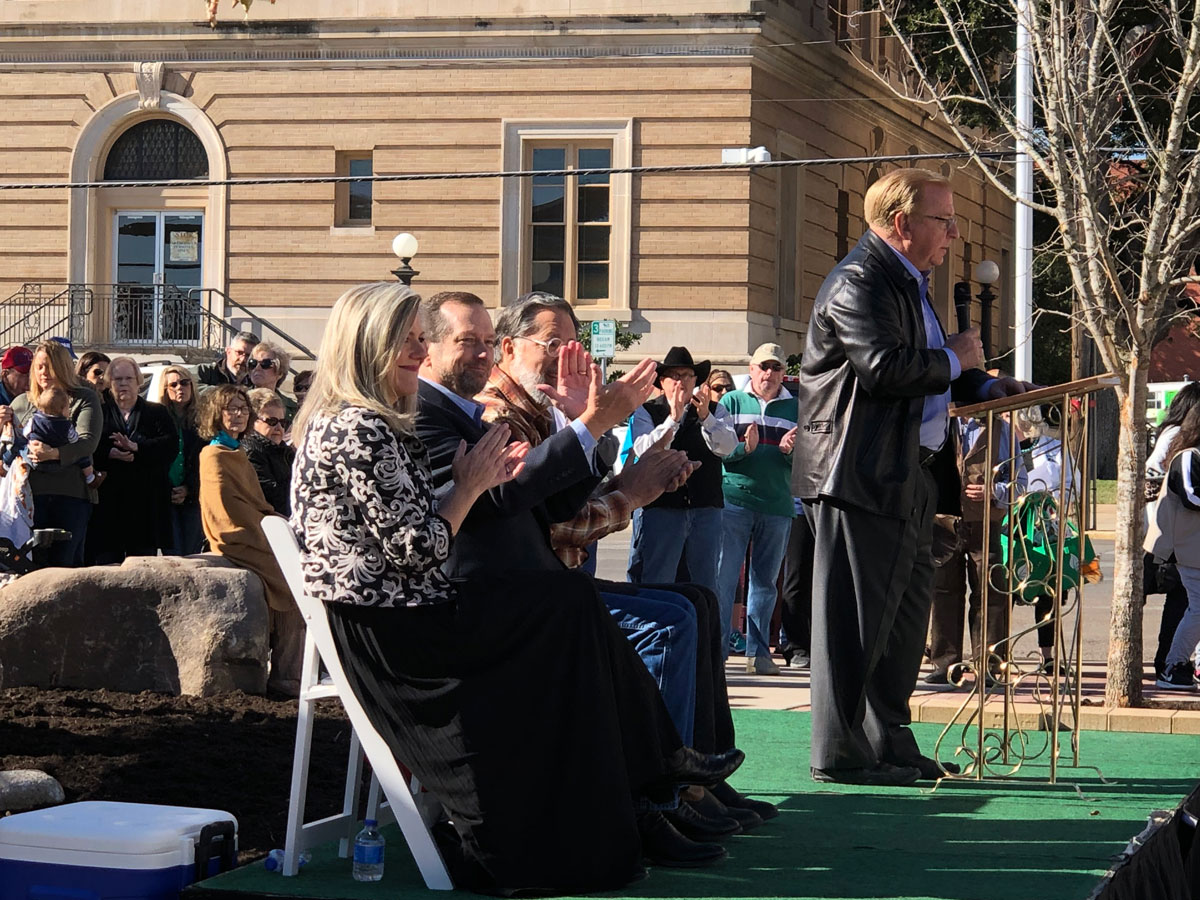 Above: On the grandstand for the grand opening of Heritage Park. (LIVE! Photo/Joe Hyde)

Heritage Park, labeled simply as a “pocket park” in the 1992 study, came together when the late J. Willis Johnson, III, donated the lot next to Sealy Flats on the southeast corner of E. Twohig and S. Oakes St. for a place to honor San Angelo’s ranching heritage.

Pfluger explained that the park, designed by San Angelo architect Henry Schmidt, was laid out to represent parts of San Angelo’s history. The elevated area on the east side of the park where the bronze statue of a cowboy and a horse will be placed at a later date represents the late 1800s when sprawling ranches were established throughout the Concho Valley. As the ranching industry grew, cities like San Angelo emerged. The brick and mortar walls on the south and western side of the lot-sized park represent the building of the cities, Pfluger explained. 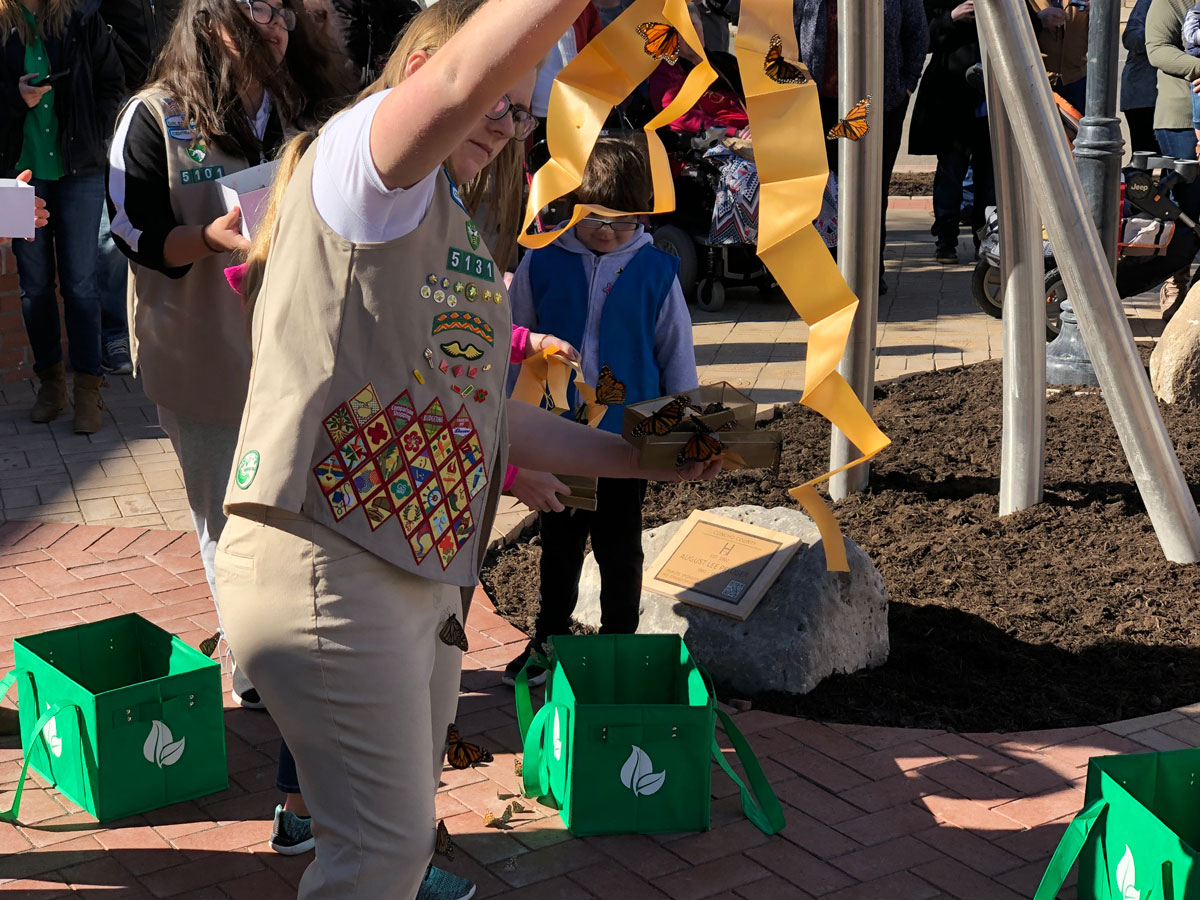 Above: Girl Scouts released Monarch Butterflies at the end of the grand opening ceremony of Heritage Park. (LIVE! Photo/Joe Hyde)

After the 1992 R/UDAT in San Angelo, Frank Gray went on to provide urban planning for many other cities, including Temple, where Pfluger also assisted. He worked on downtown Denver, and then retired after providing the same kind of downtown revitalization work for the City of Salt Lake City in Utah.

Gray said San Angelo’s downtown resurgence is notable. “You could walk down the middle of the street in 1992 and not get hit by anything,” he said. Today, the city-center bustle has returned, he noticed.

Pfluger envisions S. Oakes St. as the gateway to the arts in San Angelo. “You start with Fort Concho, walk north past the museum, then there’s the Lady in Blue, past Block One of E. Concho Ave. where there’s Eggemeyer’s, then you come to Heritage Park,” Pfluger explained. S. Chadbourne St., on the other hand, is the entertainment district.

Gray, who today lives in Colorado Springs, said if he lived in San Angelo, his focus would be on building living spaces, like lofts, above the street-facing businesses that have returned. He is a believer in the 24-hour downtown, where residents can accomplish all tasks needed for living, like grocery shopping, working, and sleeping, without leaving the area. He thought building residential spaces downtown here is a great opportunity for San Angelo entrepreneurs.

White chairs were arranged with names of the ranching families who supported the building of Heritage Park, situated in the middle of the standing room only crowd of who’s who of San Angelo.

Councilmen Harry Thomas, Lane Carter, and Tom Thompson attended. Mayor Brenda Gunter was out of town on business this weekend.

At the end of the ceremony and announcements, Girl Scouts of Central Texas released boxes and boxes of Monarch Butterflies into the air.

Pfluger said the park remains a work in progress. Noticeably missing was the centerpiece of the park, the statue of the cowboy and horse. The piece of art is still at the foundry and will arrive in several weeks when it is complete. 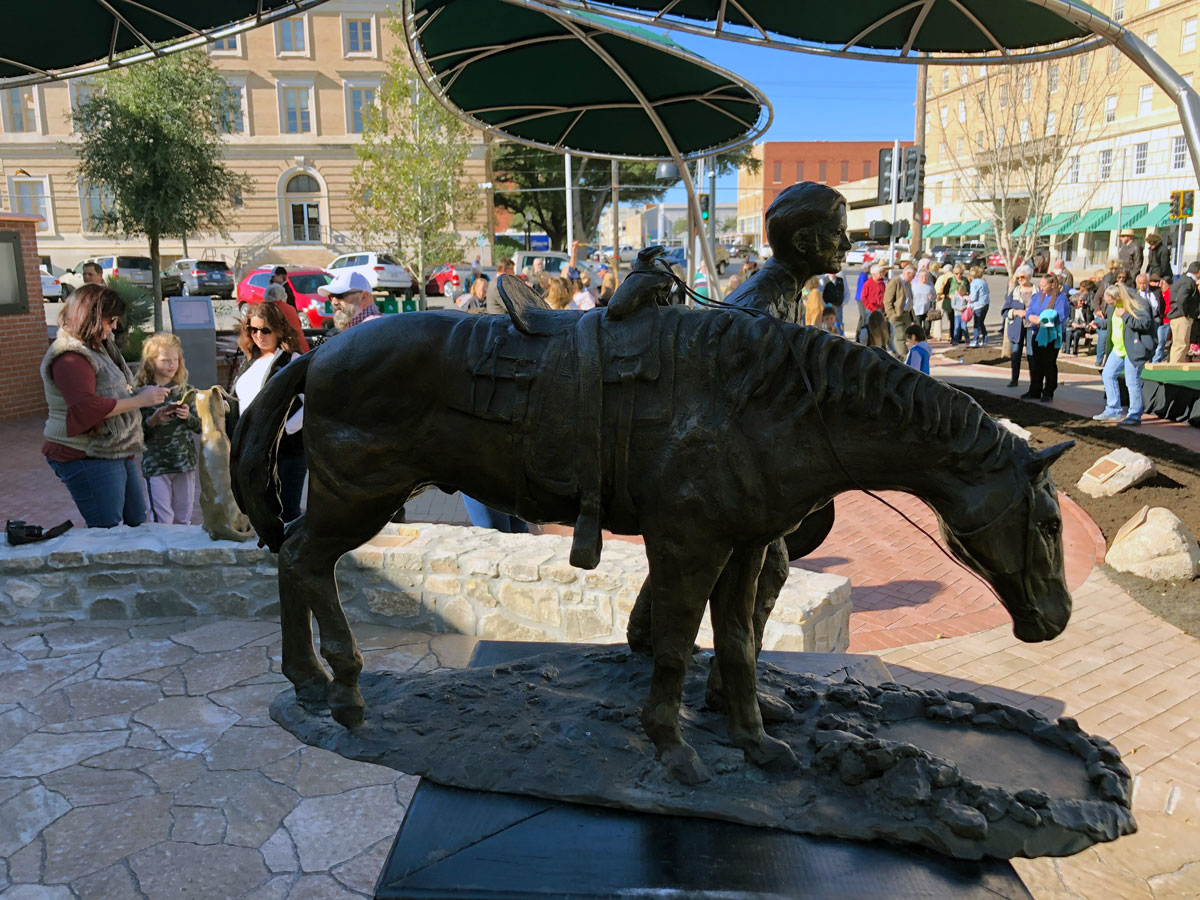 Above: A model of the centerpiece statue of a cowboy and his horse stands in for the much larger statue that will be installed in several weeks. (LIVE! Photo/Joe Hyde)

Major donors to the project include the ranching families in the area:

there is a great talent of artists in this town. I don't think it is just average either. I am not sure they have ever tapped into the talent that exists here. and maybe some of it may be because the person didn't have the funds to go beyond their place in life.

that is definitely a nice work of art of the horse and cowboy. but, even before then I was noticing all these beautiful murals. I think if we started an artist school here, you might find out that we would be looked upon as amazing on the world stage. education is also developing a natural talent and also building that person to go as far as they can with their talents.

when I stood at the foot of the concho river and saw the statue of the woman holding out her hand. I have often thought about that.

I have never seen anything so inspiring before. it just reminded me, that there are some very talented people around here.