Friday night, rainfall measurements ranged for two to three inches at various areas of the town. As of Sunday morning at 7:30 a.m., an additional 3.02 inches of rain had fallen, according to the National Weather Service measurements at Mathis Field.

At 1:50 a.m., a compact car tried to navigate the Red Arroyo crossing on S. Jackson Street and Gibbs Drive. The car stalled in the high water and stopped. The car had three trapped occupants, from what our reporter at the scene could see.

The rescue operation took approximately 15 minutes and the crews were in and out as fast as they could. They had additional calls for service for water rescues.

According to a city worker at the scene, he was in the process of posting temporary signs closing the road when the car drove past him.

The video of the last rescue at South Jackson Street:

Other areas of town experiencing high water were:

Above: Irving Street bridge over the Concho River near downtown. (LIVE! Photo/John Basquez) 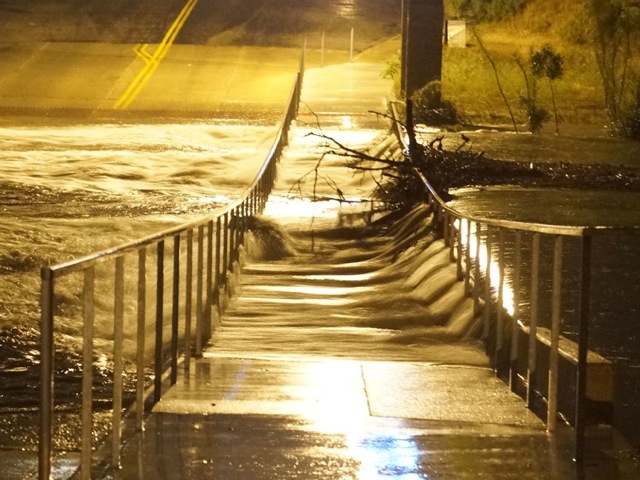 Above: Irving Street bridge over the Concho River near downtown (LIVE! Photo/John Basquez)

Above: The Concho River fills the banks near the San Angelo Visitors Center. (LIVE! Photo/John Basquez)

Above: The decorative bridge across the Concho River near Crockett National Bank. (LIVE! Photo/John Basquez)

Above: Southwest and Loop 306 near the McDonald's. (LIVE! Photo/John Basquez)

Above: Middle Concho River near US 67 Mertzon Highway that feeds into the Twin Buttes Reservoir. (Contributed Photo/Tim L. Vasquez)

Thank God for the rain. I

Thank God for the rain. I wish I could be home to experience it first hand.

Gonna be careful this morning - but my girls and I are headed out to see the flowing rivers and WATER all over town... I can't wait!

Woke up again this morning to the San Angelo Falls, where the South Concho flows into Lake Nasworthy. Lovely sound, that.

As of Sunday 11:20 AM, total precipitation since Friday has been 5.75 inches in the Twin Oaks Addition neighborhood. Bring it on!

This is a link for a weather station in Southland:
http://www.wunderground.com/swf/Rapid_Fire.swf?station=KTXSANAN114

Lake is back to normal height, I was surprised to not see the rocks this morning

Glad to hear that the lake is back to it's normal level. The slow, soaking rain is just what this area needs.

Just got back from our jaunt around town (and didn't need rescuing, mind you!) The lake looks BEAUTIFUL! The beach out near the airport is covered with water, where it used to be so low.... I'm just so excited about all of it! Now if it would warm up just a tad so we can head out and play in all the puddles!

Do I hear a shout out as in THANK YOU LORD! And AGAIN I SAY THANK YOU!
And on that same note....I am asking that all of San Angelo would pray for the same amount or more to fill up O.C. Fisher Reservoir next week or even again tonight or sometime this week... Please Lord just fill all our rivers and the lakes that have not been full within the last 10 years!!!! Please Lord, fill O.C. Fisher up to the brim!!! And we will bless your name in advance thanking you for Friday, Saturday,and this morning! Amen!Amen!

I don't think so. Be happy that we have received the abundant precipitation due to the prevailing meteorological conditions.

The fire department (nor any