SAN ANGELO, TX -- State Senator Charles Perry, a Lubbock Republican who represents San Angelo, held a town hall meeting in San Angelo Wednesday and was blindsided by David Currie, the Tom Green County Democrat Party Chairman.  Currie identified himself as a pastor, not his more appropriate title for a political town hall as the County Democratic Party Chariman, before asking a question about franchise taxes in Texas.

Tom Green County Republican Party Chairman Jeff Betty was also in attendance and quickly pointed out who Currie was.

“Twice in the last month the Democrat County Chair has misrepresented who he was to the citizens of Tom Green County. First he failed to identify himself as the Democrat Chair when attacking a speaker we brought to town and tonight he identified himself as a 'pastor' to Senator Perry at his townhall meeting. Of course Senator Perry had to explain how the cow ate the cabbage but it was fun to see. It makes me wonder if 'ol Dave is embarrassed to be the Chair of that party or is just not used to being forthright with folks.” Betty posted on Facebook.

Perry answered Currie’s question by stating that Texas is a pro-business state and large companies relocate here and spend billions on payroll because franchise taxes are low.  He said those companies leave states like California because business taxes are high. 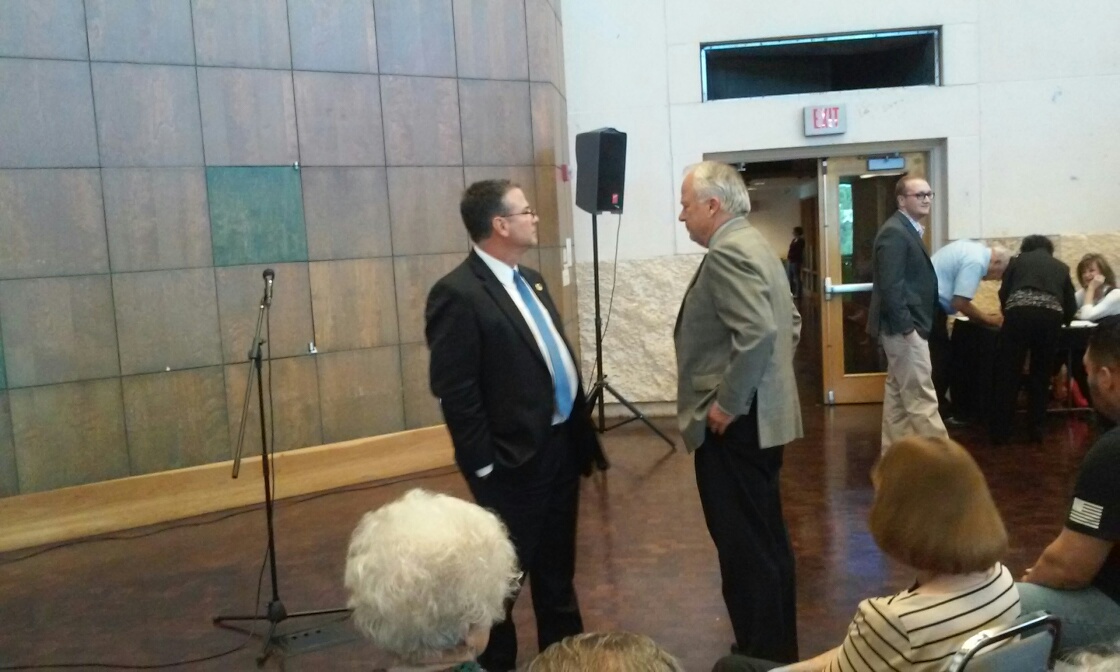 Senator Perry was in San Angelo to discuss the 85th Legislative session and the special session that followed in July.

“Property tax relief was a big issue. We didn’t get it passed.  I represent 50 counties and 48 of them have less than 10,000 people.  A penny on property tax in Harris County (Houston) gets you millions of dollars.  That’s real money.  A penny in Coke County (Robert Lee) gets you about $18,000.  You can’t even buy a patrol car for that.”

He also talked at length about school finance reform.  Perry was asked about school vouchers.  He said He has voted consistently on vouchers.  He says vouchers are not a good idea in West Texas and he hasn’t seen a plan that is a good idea.  Perry says if there is a carve out for rural communities like in west Texas, he would vote for a voucher plan and if there is not he’d vote against it.  One of the bills in the regular session had a carve out or exemption, that would allow 217 of the 254 counties in Texas to be exempt from the voucher plan but, for other reasons, it was toothless and not good legislation.

Perry said Texas has a $217 billion two-year budget with 86 percent of that dedicated funds and only 14 percent for discretionary spending.

The Lubbock Senator said the state has basically three sources for revenue; property tax, sales tax and fees.  Property taxes are too high and are driven by school funding.  Perry says there is an interim committee studying school finance and it will be a top issue during the next legislative session.

Perry currently chairs the Senate Committee on Agriculture, Water and Rural Affairs.  He also sits on the committees for Criminal Justice, Health and Human Services, and Transportation.

This could seem to indicate that misrepresentation is "standard operating procedure" in a certain political party, even on the local level.
Just observing what is evident here.

I continue to pray for what know as the American system of governance and the political process by which our leaders are selected.

You’re of course speaking of

You’re of course speaking of the Repubs right?

Fake News at its best. Just because he didn't say he was Chaiman of the Tom Green Dems? Silly. I guess now when a reporter asks a question, he must make it known to person being asked the question, that he is known to fabrications.

Old "Pastor" Currie was also quoted a few years back as saying that folks don't need Guns, and everyone should turn in their guns to the Government.

Claims to be a Baptist too, but Baptist I know dont condone abortion.

Did the reporter even attempt

Did the reporter even attempt to reach Currie for comment as to why he felt the need to say he was a pastor? Is it possible he's a pastor as well as being the chairman of the Democratic Party? This article lacks contextual depth.

Yes, we got his side: http://sanangelolive.com/news/...

"Antifa Is An Idea"

ANTIFA IS AN IDEA ALRIGHT

And the skunk cries "foul"

in After the Debate: San Angelo Democrats Desperate to Register Voters