SAN ANGELO, TX – A dorm brawl has caught global attention after the Korean international student at Angelo State University claimed he was jailed after being racially discriminated against and attacked.

As first reported by San Angelo LIVE!, on Friday, March 27, officers with the Angelo State University Police Department were dispatched to Texan Hall on the campus for a report of a fight in progress. As a result of the fight, police arrested two men. Jihan Kim was arrested for assault causing bodily injury and criminal trespassing. Shane Stumpf was arrested for assault causing bodily injury. Both were booked into the Tom Green County Jail Friday and were released shortly thereafter.

The incident has garnered worldwide attention after being reported on San Angelo Live!.

Much speculation has spread around social media regarding why the fight took place. A report in a Korean newspaper, 국제, claims the Korean student was a victim of racism. The paper claims that on Friday, Kim returned to his dorm where he found multiple "coronavirus" posters taped to his door. The photo of Jihan Kim's dorm room door showed multiple signs that warned of COVID-19.

South Korea, close to the pandemic epicenter in China, felt the impact of the novel coronavirus COVID-19 pandemic sooner than the U.S. and certainly sooner than Tom Green County where only nine cases have been detected. One can decipher why taping multiple coronavirus warning posters to a Korean international student's dorm room door could be offensive. 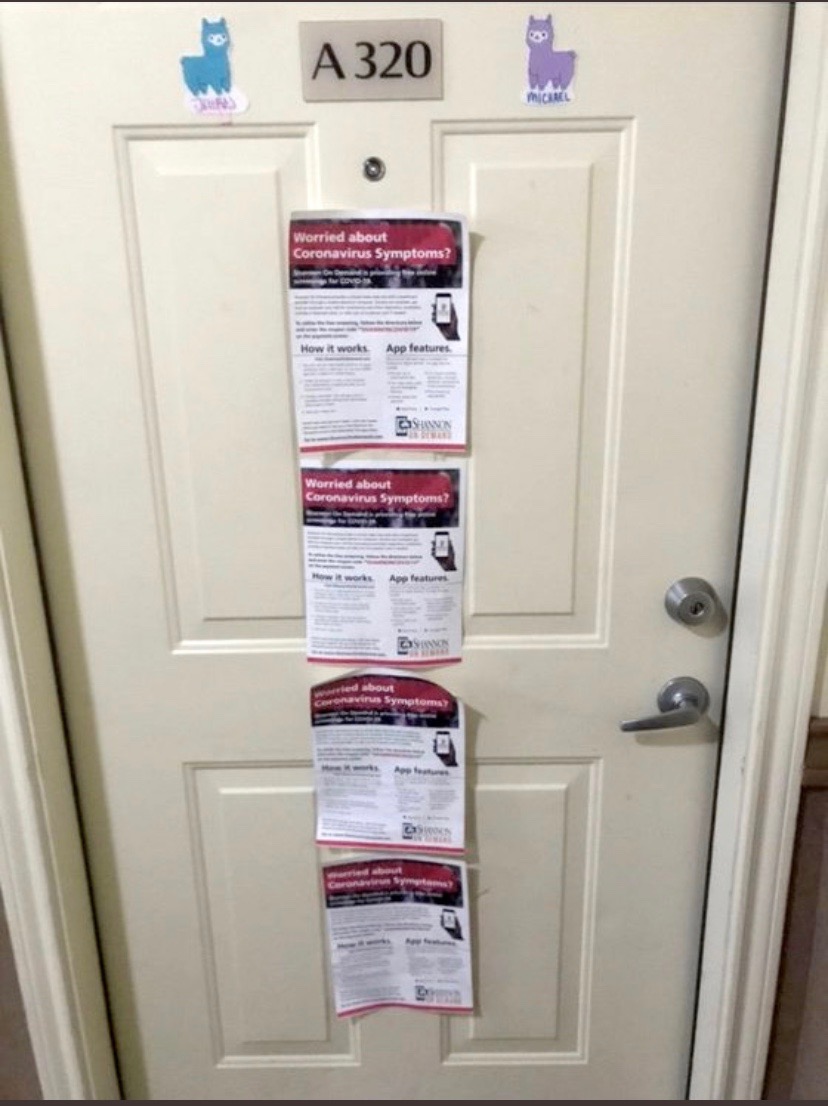 According to Korean reports, Kim suspected Stumpf to be the sign prank culprit and so he went to confront him. During the confrontation, Stumpf is alleged by the paper of pulling out a long rifle, and pointing it towards Kim as well as assaulting him.

"The threat from the gun was too scary," Kim told the Korean paper.

A Korean reporter researched Kim's opponent online and found that Stumpf was an aspiring country music singer who publishes a YouTube channel where some videos display Stumpf singing with the Stars and Bars, the Confederate Battle Flag, in the background. This heightened the paranoia in the Korean community about anti-Korean racism at Angelo State University.

"The white boy posted a video of his guitar and singing on his YouTube account, with the Southern Allied flag appearing in the background each time. The Southern Union Flag is considered a synonym for racism in the 20th century. With the frequent use of KKK's clan (KKK) and the like, the meaning of the Southern Allied Forces has become synonymous with far right and discrimination," the Korean newspaper reported. This is a rough translation of the report from Google Translate. 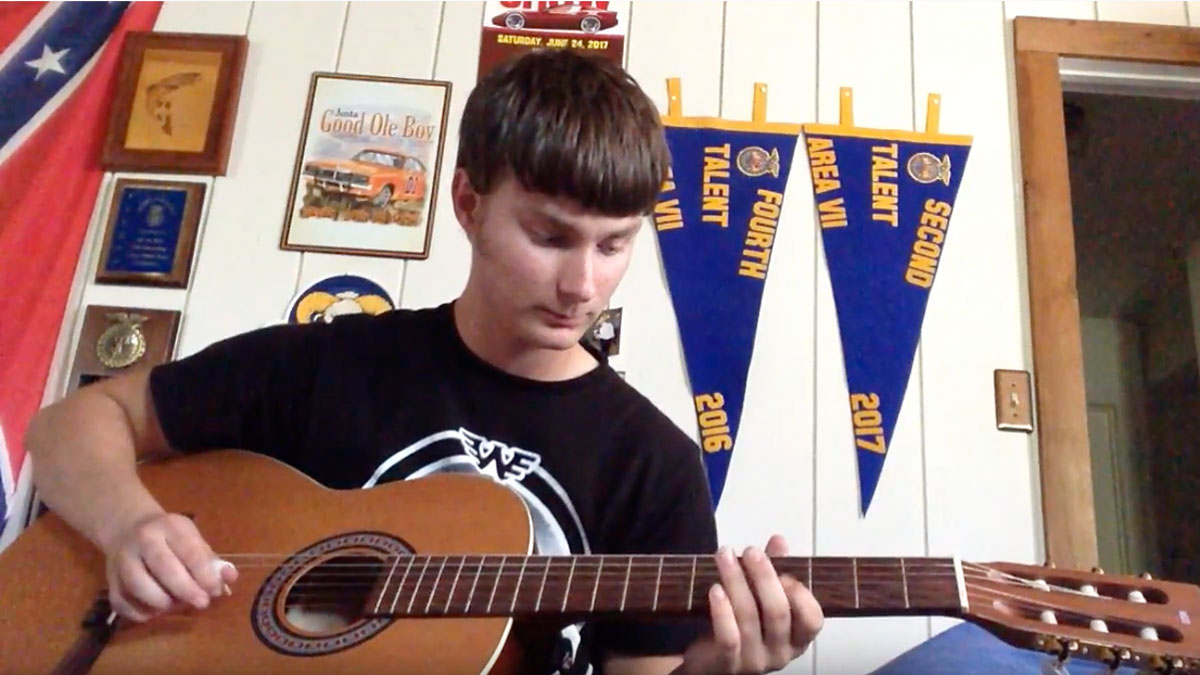 Above: Shane Stumpf sings in front of the Confederate Battle Flag. (YouTube)

While our reporter was at the scene on Friday, ASU police rounded up several subjects and transported them to the ASU Police Station presumably for investigative interviews. During the course of those interviews, the two students were booked into the Tom Green County Jail.

Angelo State University claimed they are aware of the situation but are not willing to comment on an open investigation.

No arrest affidavits have been released. County Attorney Chris Taylor refused to release any documentation on the arrests, asking us to check back tomorrow. The Tom Green County Clerk and District Clerk did not have any information about the arrests made on Friday.

A sports reporter can find a better story.

Hell the country music alone makes him a racist): Stir the pot Matt and SAL!!!

Sounds like the Korean kid went looking for a fight and got pissed when the guy he was going after defended himself. Notice there was no mention of whether or not Stumpf actually put the posters up. Also no mention of the fact that it was likely a joke.

I'm sure racism is a joke to

I'm sure racism is a joke to you.

Racism? No. I'm not sure you

Racism? No. I'm not sure you understand the meaning of the word. I'll help you out, since I'm such a nice gal. Posting printouts on someone's door of a public health announcement is a joke in poor taste. Waiting for that person to get to their door and bashing their head in with a brick because theyre Asian (or more recently stabbing an entire family at Sam's club) is racism. Now that you know the difference you can move on with more rational lines of thinking.

Why is it when someone of Asian descent is booked he's Asian, but the instigator of European descent, he is just "white male"? Stumpf doesn't even sound American.

Because any caucasian is

Because any caucasian is considered white...

It's actually not the case that every Caucasian is commonly considered "white." Middle Easterners aren't commonly considered "white," even if they're phenotypically Caucasian. Additionally, that Mexicans are legally considered "white" despite often being phenotypically Amerindian, (and thus, somewhat closer to Asians genetically and in appearance, although people of southern and eastern European descent were generally disparaged for being intermixed with peoples from Asia and Africa,) was actually used as a means for enacting discriminatory practices in Texas since, after the civil war, laws were enacted to specifically protect freed American blacks. Mexicans were left out of the legal loop in the territories that the US acquired from Mexico, but also left out of the pool until the very last day of the week. Some establishments would refuse Spanish people, too.

Historically, being Mexican in the United States has been a lot like being Irish, and if it wasn't for the Irish, the Welsh and the Scots would have never gotten a break.

The Confederate is in fact associated with racist and racism just as a KKK hood, sheet and burning cross are associated with fascism. Anyone not aware of those facts must've been living in a dark cave for decades.

Stumpf doesn't sound like he's smart enough to be in college

Stumpf is an idiot if he posted those posters.

This is not just some childish mishap. This is Herr Stumpf's fault for not realizing that a college campus is actually a UN race war battleground full of socialists that is full of constant rape. Kim didn't have any way of knowing that we all actually treat each other this badly here in Texas and consider it fun, (yes, white people treat other white people very badly here, sometimes they laugh about it, sometimes they fight...) so he can't really be blamed for taking his frustrations out on one person for the generally obnoxious behavior of San Angeloans and their rural temperament. "Cup O'Noodles for breakfast? This requires a cell phone conference... He might be in league with the guy wearing snakeskin boots..."

Both Stumpf and George Zimmerman should be repatriated to Germany.

IT IS NO RACE IT IS THE RACISM

There is really no excuse for racism. The mere fact that racism is driven by hate. Speaking of racism to call the COVID-19 the Chinese virus is racist. Your suggestion of sending Strumf and Zimmerman to Germany sparked an idea. since you think we should export them can we also add to that short list Donald Drumpf?

Spanish Flu had its origin in

Spanish Flu had its origin in Kentucky. Spain as a neutral country was the first and only report it during WW1 while others kept quiet so they could send out soldiers.

So it should be called the US flu Flu actually, and H1N1 too.

Walked into a bar

Our chaperone says don’t look at anyone. I knew that would be difficult for me because I am people person and like to talk.

This ole cross eyed gal noticed me when I walked in with my tall lanky frame, smile n says how’s it going Tex.

It was around that time that her boyfriend pulled a .38 pointed it right at me. We exchanged a few words, he lay down his piece, and we bought each other drinks

Scared me, but shouldn’t have been there at 3

He crossed the line, between being a fickle asshole and criminal negligence when this altercation became physical and threatening. There are tons of reasons to pull a weapon on someone, this, however, is not one of them.

Not to worry, I'm certain that the reeducation of Mr. Stumpf began the moment he was pulled into the ASU ''police station''.

After being briefed on the ABC's of acceptable American political views he'll be given a crash course on our coveted politically correct terminology. He'll subsequently become one of our local pariahs, possibly have all of his social media accounts removed, become branded as unemployable and ultimately deliver the ever-popular ''public apology''.

I can just see the newsfeed..."ASU student identified as suspect in mass shooting".

They'll find MAGA hats, multiple firearms, rebel flags and a plethora of ''anti-immigrant"/racist social media posts -- all in a neat little bundle, either in his car or bedroom.

All things considered, he's the perfect candidate to become the next posterboy for "radicalization"...courtesy of other radicals, of course.

To those saying it was a joke...well it brought shame to our town. The Asian man had every right to protect himself against the Stumpy's note that he posted on his door.

Are you willfully stupid or

Are you willfully stupid or unwillingly immature? I'm 28 and I know that no matter what someone puts on my front door I do NOT have the legal system on my side to go LOOKING FOR THE ALLEGED CULPRIT nor to knock their teeth in after I do. In what world was the asian kid in the right? If the skin colors were reversed we would call it an assault on a person of color after just an innocent prank that the white kid couldn't handle. They are BOTH idiots AND it was done as a joke in poor taste. As I've said before if racism is equal to hate then by that logic you would need to see methodical violence or psy-ops over time to call it racism.

couldn't handle a fair fight so brought out the shotgun. what a coward.

had to draw a gun