According to the investigating San Angelo Police Officer McAndrews, the semi was northbound on South Bryant Avenue and ran the red light where Avenue L crosses the busy thoroughfare.

Police said that the driver of the Sierra pickup was quick to react when he saw the inevitable, and increased his speed to avoid being hit by the oncoming sand truck. It was too late, unfortunately for the pickup. Instead of crashing into the front or mid-section of the pickup, the sand truck demolished the rear end. The quick reaction by the pickup driver may have saved himself and his passengers a trip to the hospital, though. No one was injured.

As firefighters were responding to the crash scene, witnesses and fire department personnel told police that they saw a black Hummer plow into a red two-door sedan. The Hummer fled the scene, traveling west on side streets with the damaged red car in pursuit.

Police said they have found the Hummer in the Santa Rita neighborhood near MacKenzie and Algerita, the driver is no where to be found.

The driver of the sand truck was cited for running the red light, police said.

Traffic on South Bryant in the northbound lanes was snarled until the crash was cleared.

There is police activity near MacKenzie and Algerita Drives in Santa Rita relatd to apprehending the driver of the black Hummer. Also, the gray pickup that was hit by the sand truck was a GMC Sierra. The story has been corrected.

The driver of the black Hummer is still at large. Apparently, the driver ditched his Hummer near the 1200 block of Algerita and fled on foot. Neighbors have reported to police seeing a Hispanic male running through alleyways and backyards. Police are setting up a perimeter for the search. 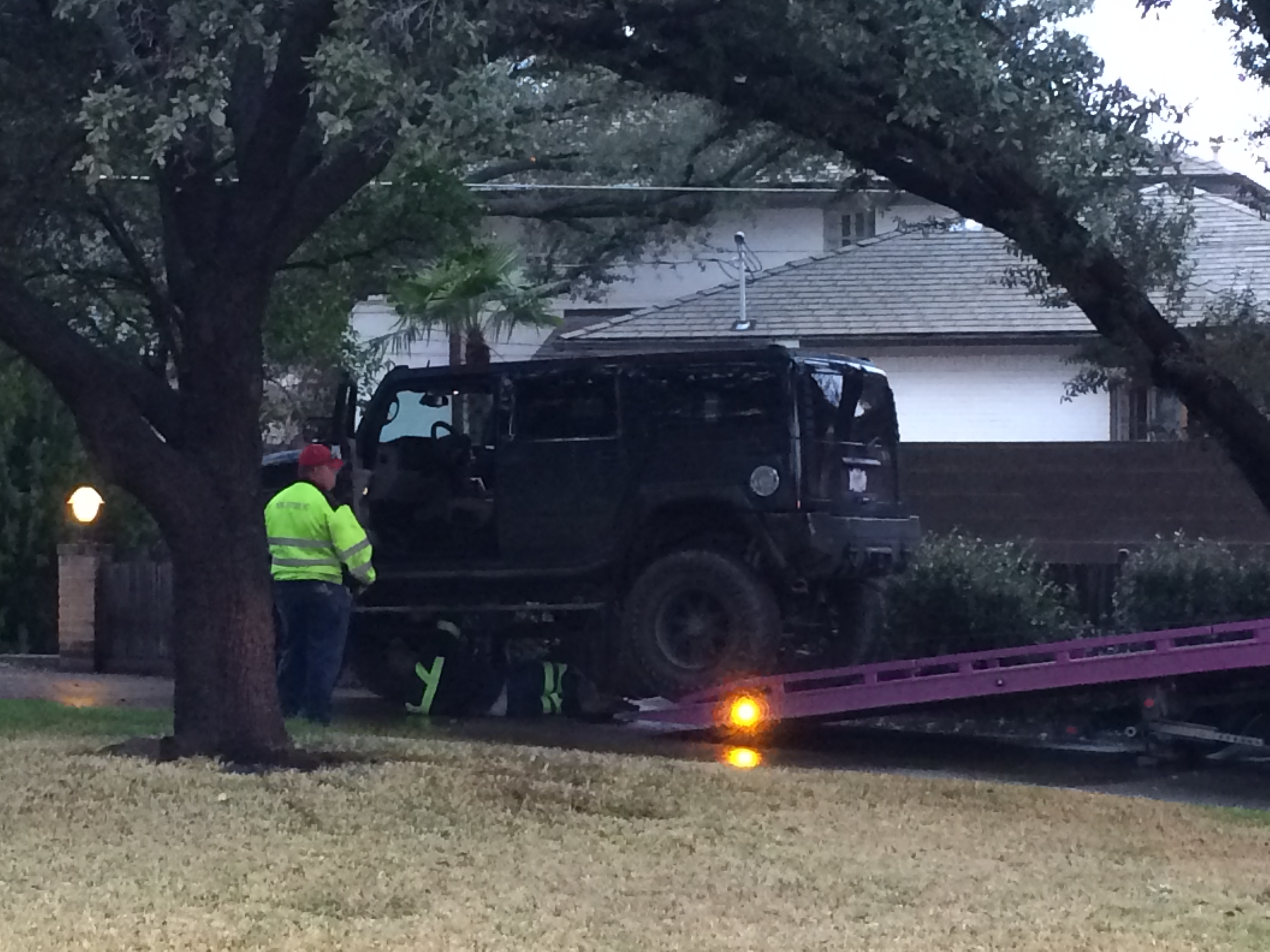 Above: The black Hummer that was alleged to have been used in a hit-and-run at the accident scene where the sand truck was. According to police, the driver fled on foot.

Witnesses said that two Hispanic one of them wearing a gray sweat suit and ball cap fled on foot southbound from 1201 Algerita Drive in Santa Rita.

The Hummer occupants remain at-large. To clarify the secondary accident's sequence of events, a volunteer fire department member was first on the scene. As he was tending to the scene before the SAFD and SAFD arrived, the secondary crash happened. He was the witness to the Hummer fleeing the scene with the damagaed red car in oursuit. We will update this story if we are notified the Hummer occupants have been apprehended.

There are cities that have truck routes that keep semis and tractor-trailers away from the central thoroughfares of town except when making deliveries or pick-ups. This saves on road repairs, alleviates traffic and makes for safer in town driving. Perhaps it's time for San Angelo to implement such routes away from the center of the city.

Seriously, if this town wasn't being run by a bunch of self interested, incompetent, inbred, senile, SOBs, we would not be seeing this type of widespread BS on a daily basis.

The ones that "run this city" are running it straight to the ground.

So the ones that "run this

So the ones that "run this city" caused the driver to run a red light and caused another to hit and run? Wow

Look up the word infrastructure