GRAHAM, TX — Nearly every week, Wall encounters a team that figures out its offense from a play calling and tendency standpoint.  They come at you with the run, and they do not relent.  Every one knows it, but no one, at least up until Friday night, had the athletes with the ability to stop them.

Friday night, in the 2019 Football Conference 3A D1 Regional Playoff Game, Pilot Point, especially in their defense’s back seven, had the players to completely take the game away from Wall by making Wall play the Pilot Point football way instead.

Pilot Point started with the ball at their own 25 after Wall booted the opening kickoff into the end zone.  Their speed and overall athleticism in their skill positions was on display early. 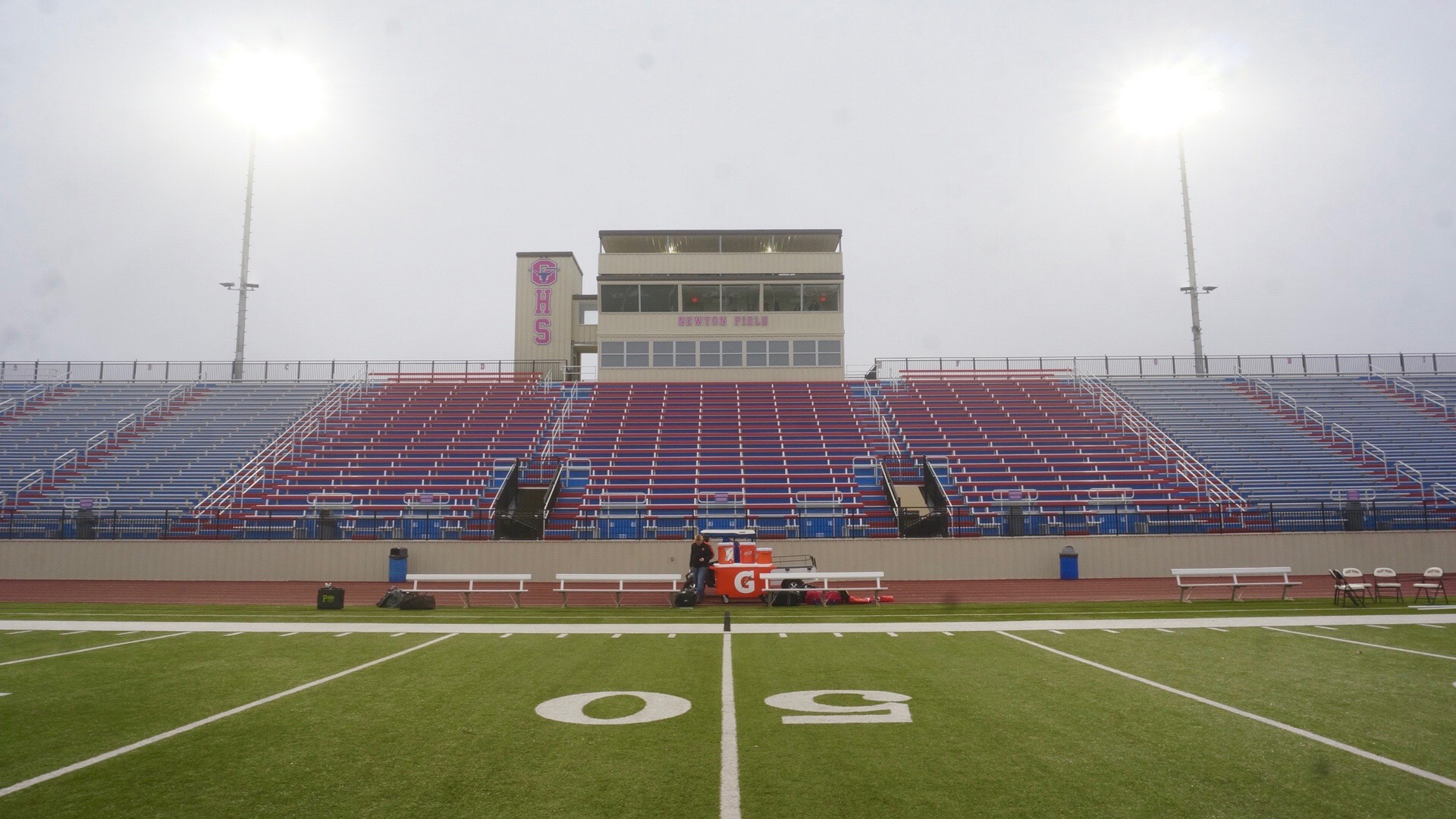 Above: A foggy Newton Field prior to the start of the Wall vs. Pilot Point regional payoff game in Graham, Texas on Nov. 29, 2019. (LIVE! Photo/Joe Z. Hyde)

Pilot Point Running back Javon Bruce took the first down carry up the middle for seven, and Jacob Pitts followed it up with a three yard quarterback draw to move the chains.  On 3rd and 13, following a false start, short run, and incompletion, Pilot Point picked up another first down on a running back screen to Bruce that put them at the 47.

From there, the Bearcats caught Wall sleeping and threw another screen, this time to do it all wide receiver Max Hollar.  Hollar jolted down the right sideline 53 yards for the touchdown with 9:40 still to go in the first quarter.  Bruce gave them two more points after he powered his way in on the two-point conversion.

Wall answered right back with a perfect Hawk drive.  Starting at their 14, they converted a 3rd and 9 with a Dominic Garcia run up the middle to the 29.  Quarterback Drew Morrison moved the chains again with three straight runs to the 46.

Cinch Dickey saw his first touch on a pitch to the right side that he carried to the Pilot Point 37.  Three consecutive handoffs went to Garcia and they were inside the 10 at the 7.  On the next play, Dickey took another pitch and ran it in to make the score 8-7 with 4:04 remaining in the first.

Wall’s defense woke up a little bit on the next series and limited Pilot Point to just 8 yards.  Wall's Zachary Lane wrapped up Bruce in the backfield for a loss of one on first down, but Pitts followed it up with a 10 yard pass along the sideline to wide receiver Bam Bruce on a rollout to the right. 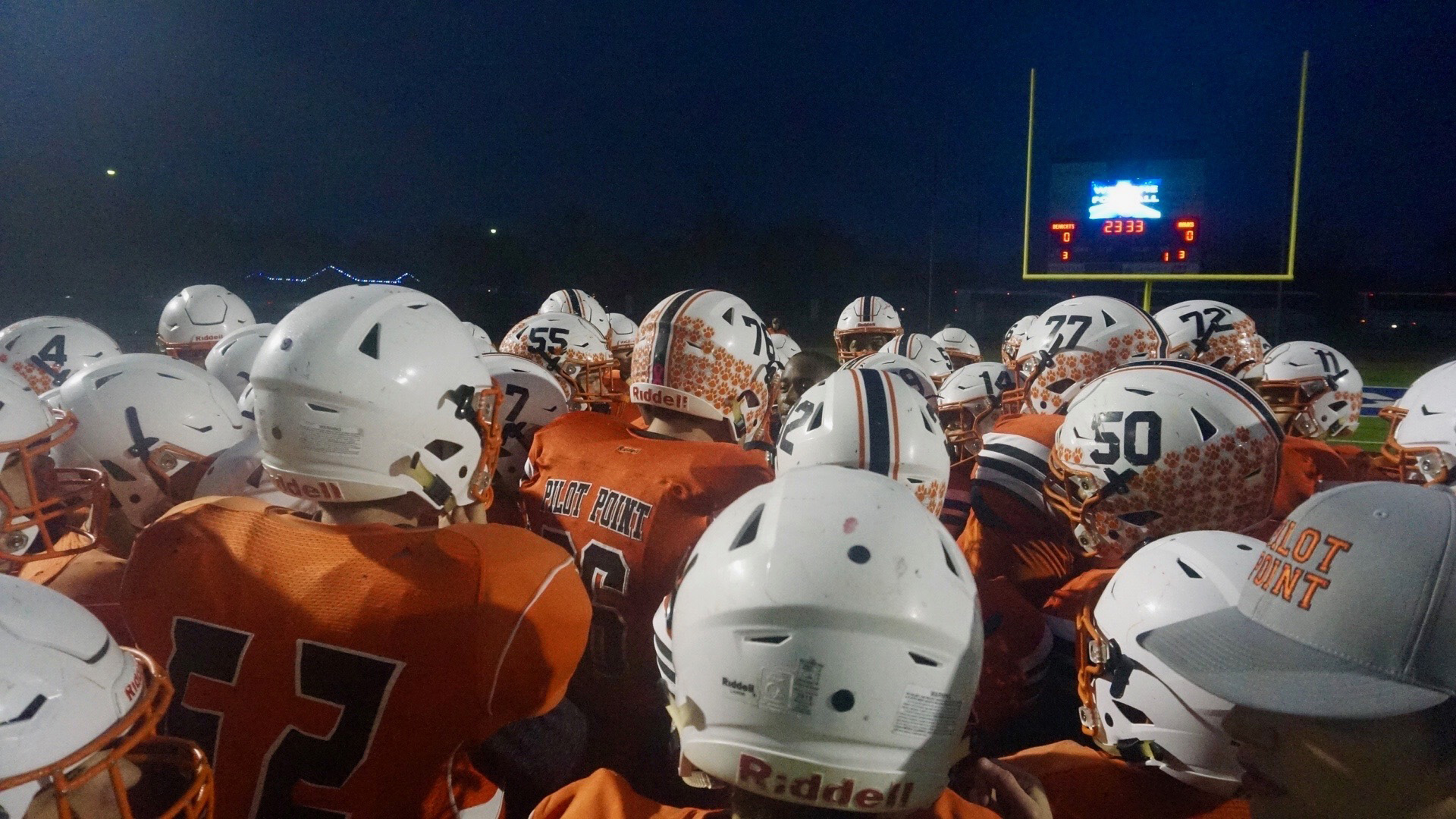 Above: The Pilot Point Bearcats gather before running onto Newton Stadium field in Graham, Texas to start the regional playoff against the Wall Hawks on Nov. 29, 2019. (LIVE! Photo/Joe Z. Hyde)

A false start turned the 3rd and 1 try into 3rd and 6, and a group of Wall Hawks chased Javon Bruce down along the far side of the field two yards short of the first on a swing pass.  The ensuing punt rolled down to the Wall 19, but Wall’s best was already behind them.

From the 29, the Bearcat defense clamped down.  Javon Bruce wrapped up Garcia for no gain on first down.  Dickey took a pitch seven yards before being shoved out of bounds. A Morrison run made it 4th and 1, and Wall Coach Houston Guy kept his offense on the field.

Wall snuffed out two Bruce runs to start the possession before Pitts showed off his arm and challenged the outsized Wall secondary.  He lofted a deep pass to 6'2" Aydon Cox but Taven Espinosa swatted the ball away at the last second to force another Pilot Point punt. 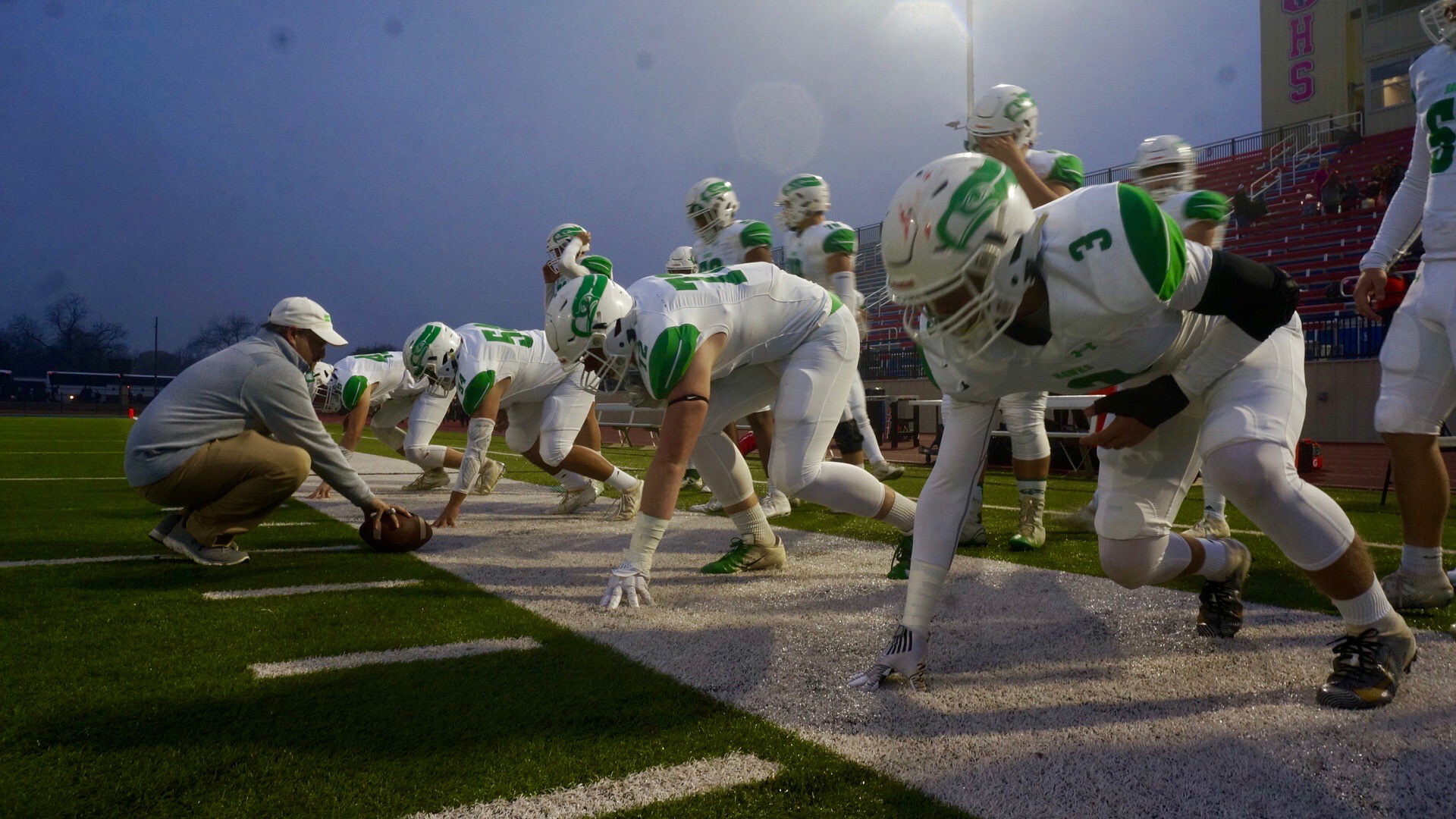 Above: The Wall Hawks prepare for the game just prior to facing the Pilot Point Bearcats for the 2019 regional playoff game at Newton Field in Graham, Texas on Nov. 29, 2019. (LIVE! Photo/Joe Z. Hyde)

Wall started with good field position after Caleb Heuertz returned the punt to their 47.  A loss of eight on first down negated any momentum the return gave them, and they gained 10 of the 18 yards required before punting.  Then, the most more controversial point in the game came on the next play.

Wall’s kicker crushed the punt over the head of Pilot Point’s Hollar and forced him to turn around to make a catch. As he was retreating, he reached his hands out to haul it in, but the ball was out of reach and bounced to the three yard line where Wall picked it up and ran it into the end zone thinking Hollar touched it.  It was certainly close, and Hollar lunged after it as if knowing he got a finger on it, but the referee called the play dead and, instead of a Wall touchdown, declared it Pilot Point's  ball at their own 3.

The Bearcats weren't detered by poor field position and marched right down the field thanks in large part to a Cox catch on 3rd and 10 from the Pilot Point 42.  Pitts juked a Wall rusher and ran around in the pocket as the coverage downfield broke down. He finally found Cox open and threw it 37 yards to the middle of the field where Cox jumped and brought it down to the ground at the Wall 21.

On the very next play, Bruce took a handoff to the left side and outran the Wall defenders to the left pylon.  Once again, a little trickery gave them two more points as a speed option to the right turned into a pass from one running back to another in the end zone.  It was 16-7 Pilot Point with 1:40 to play in the first half.

Wall tried to get something going, but their offense is not built to punch it into a higher gear in two-minute situations. Pilot Point knew this and allowed them to pick up short runs with little resistance knowing they could not do that all the way downfield with such little time remaining.

Pilot Point put a safety back deep to essentially play center field and watch Drew Morrison’s eyes if he dropped back to pass. The decision payed off as Wall called a four vertical pass with just under thirty seconds to play. Morrison targeted Rios up the seam, but just as the ball neared him, Pilot Point defensive back Anderson jumped in front of it from his safety position and ended the drive.

The two teams headed to the locker rooms with a score of Pilot Point 16, Wall 7.

Wall knew going back out onto the field after halftime that their opportunities were limited, and they needed to take advantage when they had the ball.

Their first drive started at their 28, and two Garcia runs gave them 3rd and 1. Normally, Wall would have no problem picking up first downs in situations like this, but Pilot Point was tremendously well prepared and followed their assignments when defending the triple option.

They took away Morrison’s running backs and swallowed the QB up for no gain forcing another fourth down try.  This time, Morrison slipped through the line and fell forward for a four yard gain. The momentum gained from the big conversion did not last, though, when Morrison could not secure the next snap.  The ball bounced around, and Wall evaded disaster when Dickey fell on it for a five yard loss.

Morrison tried to connect with a double covered Connor Dierschke, but the ball floated over everyone’s head and landed incomplete.  Pitts broke up the 3rd and 15 pass, and Wall’s opening possession came to an end.

Pilot Point's Pitts showed just how dangerous he is as a dual threat quarterback on the next drive. He converted a third down with his legs and picked up another on 2nd and 15 with a 16 yard strike to Anderson along the sideline to put the ball at midfield.

Four plays later on 2nd and 12 from the Wall 39, Pitts evaded Wall defenders in the pocket and started rolling to the right sideline. He eventually saw a crossing Anderson and completed the pass near the right hash. Anderson then took it, made a group of three Wall defenders miss at the 15, turned to the end zone, juked another Hawk and dove, reaching the ball across the goal line for six.  23-7 Pilot Point with 5:19 in the third.

Pilot Point did not relent defensively and stuffed Chase Rios on 4th down after Wall only picked up 8 on the first three plays.  Bearcat ball at the 50.

The next Pilot Point drive put the game almost out of reach for Wall.  Runs by Bruce and Pitts gave them a 1st down at the Wall 24 as the third quarter came to a close.  The Hawks kept them to just nine yards on the next three plays, and Omar Trejo nailed a 31 yard field goal to make it a three possession game, 26-7 with 10:25 left.

Wall had no chance to come back at this point. They were too beat up, too tired, and too predictable.

Morrison had no time to survey the field on pass plays and had to throw it to his first option just to avoid sacks.  Pilot Point forced a 4th and 18 after the field goal, and bodies around Morrison’s legs did not allow him to get behind the throw.  The pass fell halfway between him and his receiver more than 20 yards downfield.

Wall forced a Pilot Point punt but it was too late. Morrison was picked off by quarterback/cornerback Jacob Pitts over the middle to end the game with 1:03 left. Pitts took a knee twice and that was it.

The Bearcats will play Brock, who outlasted Bushland 20-17 in overtime Friday.

The loss is Wall’s first of the season and ends a tremendous, 12-win season for the Hawks.