SAN ANGELO, TX — The City of San Angelo is about to embark on a plan to allow commercial, industrial, and more residential development southwest of Lake Nasworthy. This is an area that contains Mathis Field—San Angelo Municipal Airport—and the shoreline areas on Nasworthy near the nature center. The project will also provide increased capacity for lake-area housing developments.

At issue is the sewage capacity on the other side of Veterans Memorial Bridge, the long bridge Knickerbocker Road traverses over Lake Nasworthy. According to the City, currently, all sewage flowing from the southwest side of that bridge is through a single, uncased pipeline underneath the water crossing the lake.

“Should that pipeline ever fail, sewage could not be moved, it might seep into the lake, or both. That represents a risk to the community,” City Public Information Officer Brian Groves said.

Increasing the sewage capacity is estimated to cost $32 million. The proposed project will include installing two cased mains to move wastewater across the lake. That would provide a failsafe that would allow for uninterrupted service should one of the lines fail or require maintenance. And because the pipes would be cased, there will be a minimized threat of sewage leaking into the lake environment, according to the City.

The underwater uncased sewage line is just part of the low capacity challenge. The current system was installed piecemeal over decades without an overall plan. As a result, it relies upon a complex configuration of 26 lift stations and 106 grinders. According to City officials, Allen Woelke of CDM Smith was hired to study the system. In his report, he proclaimed the current system is “the most complicated wastewater system I have ever seen” in his 40-year career. He added that the complexity inhibits the flow of sewage, which contributes to odor issues.

To even better understand the lake sewage system challenge, of the 52 sewage lift stations citywide, 26 are at Nasworthy. The City treats 8 million gallons of wastewater per day. The Nasworthy system produces 500,000 gallons of that total, according to the City. Nasworthy accounts for 1/16th of the entire city sewage system and 50 percent of the lift stations. By removing six of the eight stations, as the $32 million plan proposes, the City promises lower operational costs for maintenance.

In all, after the project is complete, capacity at Nasworthy would increase from 500,000 gallons of wastewater to 2.5 million gallons per day. Consultants promise this will accommodate any new development at the lake and airport.

The City has seen increased activity—and land sales— at the industrial park on the northeast side of the City. The industrial development has been upgraded with infrastructure grant from the federal government for $1.2 million that was spent on water utilities and roads. The project effectively doubled the amount of land available for sale there.

Yet, the northeast side has no access to air transportation and limited rail.

Packaging the airport as the home to another industrial development area for the City arose from the “planes, trains, and automobiles” strategy.

“Mathis Field is perfectly positioned for an industrial park that would boast superior access to transportation by air and by highway. That would be attractive to prospective tenants and would boost job creation,” Groves said. The current sewer line situation does not allow for any development at the airport, other than in buildings and facilities already built. 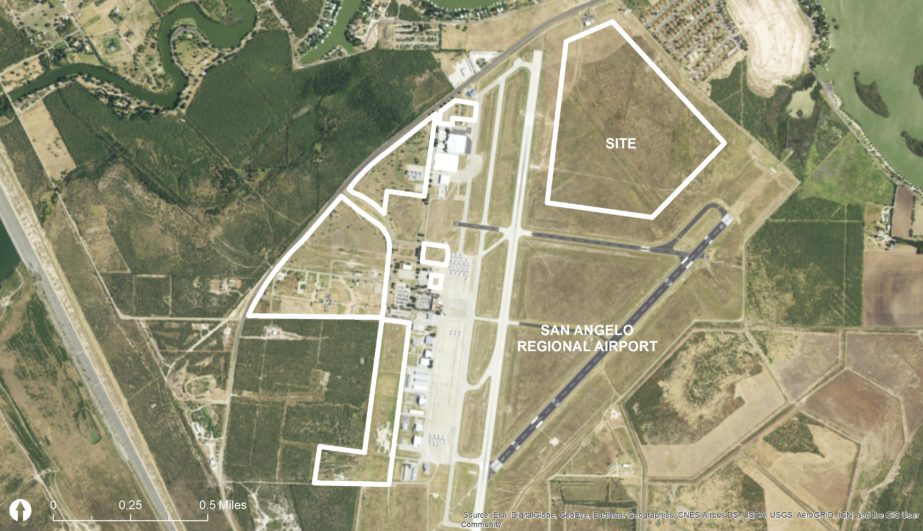 Above: Proposed property around the airport available for development, as published by AEP Texas. (AEP Texas)

“Developing the airport is a good move; it’s great land for development,” said Michael Looney who heads the economic development division of the San Angelo Chamber of Commerce. Looney’s primary role there is prospecting companies to move to San Angelo.

Looney said aviation companies manufacturing or servicing propulsion systems for aircraft, parts distributors, and repair facilities are perfect fits for San Angelo. Mayor Brenda Gunter added that the airspace here is not crowded and the weather is usually VFR, or clear enough for flying under “Visual Flight Rules”, not cloudy IFR, or Instrument Flying Rules. Flight testing after a repair or overhaul is safer in clear skies and good weather.

Airframe and propulsion repair companies that perform 100-hour and annual inspections on large airliners have inquired with him, Looney said. Mathis Field’s primary runway is 8,000 feet, long enough for larger aircraft. Two other runways are available in case of shifting winds, but none are as long as the primary surface.

“These aviation-related companies want to be near an airport,” Looney said.

“The airport itself is one part of a bigger economic development story out there,” Looney said. But Looney is especially excited about an airport business development effort there. “These airport developments particularly work well near smaller communities like ours,” he said. “The value of our airport is more than just using it for more passenger air travel service.”

To pay for the $32 million sewage infrastructure project, the City proposes tapping the Lake Nasworthy Fund. The fund contains the proceeds and interest from the sale of lots at the lake. For years, the City only long-term leased lots for homebuyers to build homes on the lake. A few years ago, the City started a program where lessees could outright purchase the lot where their home was built. Over time, the fund balance has reached $15 million with a little more potential to grow. The City said approximately 160 leased tracts remain, which are estimated to generate about $16 million additional in future sales revenue.

To tap the $15 million already in the Nasworthy Fund, voters will need to approve it. The balance of the $32 million project— about $17 million — can be paid with a loan against future revenue from the entire wastewater enterprise the City operates. No voter referendum is needed to borrow the balance needed for the project.

Because the Nasworthy Fund was created using land sales from properties on Lake Nasworthy, the City is eying adding quality-of-life projects at the lake. Those might include public beaches, boat ramps, a fishing pier, and docks.

The end game is to increase the industrial and commercial tax base of the City. City Manager Daniel Valenzuela said there is too much pressure on residential property owners and their property taxes. He believes making developments friendly to new land and building investments by companies here or to attract new business from elsewhere to relocate here will be beneficial to all citizens.

To start, however, the City will need voter approval. Look for a ballot initiative to approve tapping the Lake Nasworthy Fund in November.

One problem at a time

Can we please focus on one problem at a time. Let's fix the current wastewater processing plan FIRST. If we have 100s of projects in the air, none of them get fixed. Wastewater plant first as that will also help secure our water! 7.5 million vs 500 thousand.

I agree the waste water should be taken care of first but how many years will it take to do it? Also, is that something that has to be voted on by the public? The one thing they need to do in the meantime is tear down and re-build the fishing dock. It will not take long to do it but if I understand that part correctly it has to be voted on first.

I agree JL, but something needs to be started. We have talked and talked, and nothing is being done. We have done studies but I have yet to see anything on the ballot to raise a bond. Let's get this show on the road. I had hoped that the Legislature would throw in some funding, but I haven't seen that either. Maybe I haven't been paying attention as well as I needed to. Either way, this is something that needs to be addressed and started in the next few months, even if it is a special vote.
PS, selling the ranch as a whole is unlikely to happen. We raised the price 12 million and took almost all of the mineral and water rights away. How does that make sense?